UK. ‘ Yes, the Grenfell Tower fire is political – it’s a failure of many governments ‘ 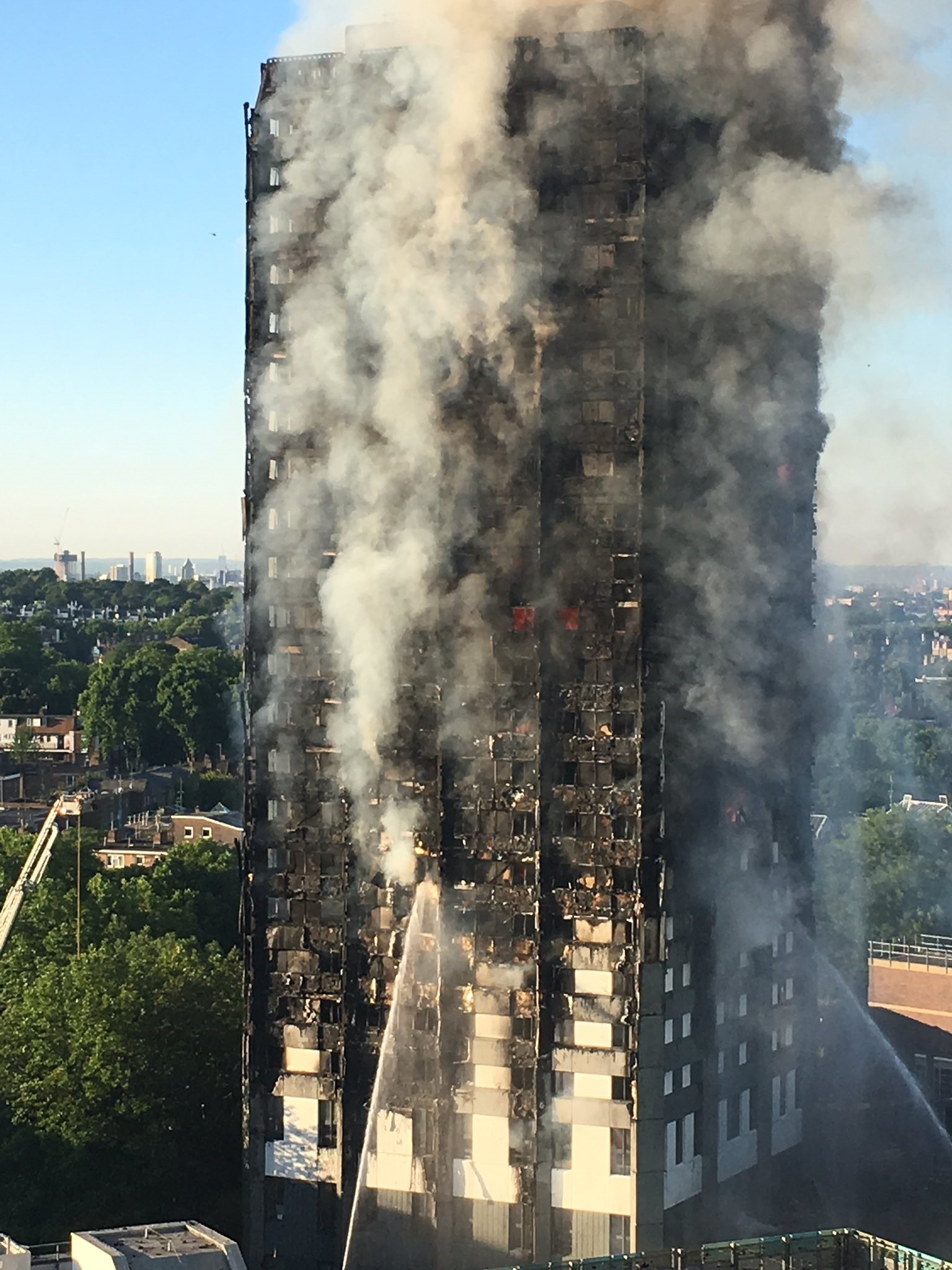 “It is a truly terrifying thought but the Grenfell Action Group firmly believe that only a catastrophic event will expose the ineptitude and incompetence of our landlord, the KCTMO, and bring an end to the dangerous living conditions and neglect of health and safety legislation that they inflict upon their tenants and leaseholders…”   — Grenfell Action Group, November 2016

One of the key functions of the state is to protect its citizens. Much of the debate in the UK’s recent general election focused on the government’s role in protecting citizens from terrorists. This was, perhaps, understandable given the recent series of attacks in London and Manchester. But it also diverted attention from the state’s equally important duty to ensure a safe, secure and decent quality of life for all its citizens.

With the weight of many years’ experience writing and advising on London’s housing and planning strategies behind me, I think it fair to say that the inferno at Grenfell Tower – a publicly owned housing block for lower-income households – represents an acute failure of government at all levels. The facts of the case are subject to a major enquiry – and new information is emerging on a daily basis. We still do not know whether the death toll is 30 or 100.

At this early stage, it is premature to attribute blame. Yet residents who have lost their homes and possessions – and in many cases their relatives and friends – are justified in their anger and their need to seek justice and redress. It is unlikely that we will see any of the parties involved admitting responsibility for the disaster. Certainly, should any charges of corporate manslaughter be laid – as Labour MP David Lammy has demanded – they would be subject to legal disputes for months and possibly years to come.

What is evident in this turmoil, is that for several decades no government has focused sufficiently on the need to provide good quality, safe and secure homes for lower-income households. So far as governments have considered housing at all, the focus has been on market-led supply for prospective homeowners. Only in recent months – in the housing white paper released by Theresa May’s government in February – did we see any recognition of the need for more rented housing.

Over the course of successive governments, we have seen an emphasis on redeveloping estates to provide high-density flats for the private market, rather than improving the homes of the council tenants and leaseholders who live there. The last Labour government invested in the decent homes programme to improve existing council housing. But given the events at Grenfell, it is open to question whether enough attention was paid to protection from fire.

Increasingly, it has been government policy to leave decisions on housing provision, maintenance and improvement to local councils. Some councils transferred their stock to housing associations; others set up “arm’s-length” housing organisations to manage their stock. It was, in fact, Tony Blair’s Labour government which promoted separating the management of the stock from the local authority’s housing and homelessness duties.

I never understood the logic of this proposition. It weakened the local authority’s ability to deliver on its legal responsibilities, while at the same time leaving tenants confused about the division of responsibilities between the owner of the housing (the local authority) and the managing body. Elected councillors could offload responsibility by referring complainants to the managing organisation – something many councillors were relieved to be able to do.

It is perhaps ironic that, in Kensington and Chelsea, the arm’s-length management organisation was actually constituted as a Tenant Management Organisation (TMO) – a corporate body created for residents, tenants and leaseholders to enable them to manage their own homes. Tenants of Grenfell Tower seem to feel as though the KCTMO did not lead an adequate response to their concerns. In a blog post, dated November 2016, a residents’ action group said:

It is a truly terrifying thought but the Grenfell Action Group firmly believe that only a catastrophic event will expose the ineptitude and incompetence of our landlord, the KCTMO, and bring an end to the dangerous living conditions and neglect of health and safety legislation that they inflict upon their tenants and leaseholders.

This raises major concerns about accountability within such organisations. KCTMO said in a statement: “It is too early to speculate what caused the fire and contributed to its spread. We will co-operate fully with all the relevant authorities in order to ascertain the cause of this tragedy.” A spokesperson for the council said: “We have heard a number of theories about the cause of the fire at Grenfell Tower. All of these will be thoroughly investigated as part of the formal investigation which has already begun.”

There are clear concerns as to the nature of refurbishment and regeneration programmes – and the conflict between competing aims. The refurbishment of council blocks such as Grenfell Tower appears to be as much about making cosmetic improvements as about upgrading the facilities and securing the structure of the block. At Grenfell, the cladding was justified as a means of improving insulation, but also in terms of “modernising” the appearance of the block – a common practice for 1970s concrete blocks, which are today appearing increasingly worn.

There is obviously a question as to whether the refurbishments actually contributed to the spread of the fire – and there is considerable expert advice suggesting that this might have been the case. To learn that other countries, including the US and Dubai, have banned the use of certain cladding materials demonstrates the need for tougher building regulations.

What’s more, it has been widely reported in the press that the cladding used on Grenfell tower was the cheaper and more combustible of two types of panel available is a hint that issues of cost and energy efficiency may perhaps be more important than issues of basic health and safety – supposed to be central objectives of building regulations. Worse, it has been reported that the London Fire Authority actually wrote to all boroughs as recently as April, advising them of their concerns on the use of some kinds of cladding panels.

A number of expert reports have argued in favour of revising the building regulations, notably following the inquiry into the 2009 Lakanal House fire in Southwark in which six people died. The fact that the Lakanal House fire was eight years ago and building regulations have still not been updated demonstrates a complete failure to learn the lessons from previous disasters and take speedy corrective action.

The construction company behind the recent refit of Grenfell has said it would “fully support” an investigation, and that the work met all required building control, fire regulation and health and safety standards.

Now we must learn

The fire has rightly raised the question of why we should build tower blocks at all. After the collapse of the 22-storey Ronan Point block in 1968, and following changes in the subsidy system, councils generally stopped building high rise. Having families living in social housing above the fifth floor was actually a measure of deprivation with the national index of multiple deprivation, which generated additional central government funding for local authorities.

Many councils in the 1970s and 1980s, notably in East London, set about demolishing towers and rehousing the tenants in low and middle-rise housing. Other local authorities moved families out of upper floors and re-let the flats to singles under “hard-to-let” schemes. Yet Kensington and Chelsea opted to keep some of its high-rise blocks – and even develop more. In fact, Grenfell Tower was started in 1972 and completed in 1974 – six years after the Ronan Point explosion.

In recent times, though, successive London mayors and many boroughs have encouraged the development of new high-rise residential blocks. Most of these are destined for the home ownership market, though many are bought for investment, rather than occupation. The argument goes that safety standards have improved and that home owners are less likely to present management problems than social housing tenants – the subtext being that problems with tower block living were primarily related to the occupants, rather than the structures themselves.

Based on his approach so far, it seems London’s current mayor, Sadiq Khan, like his predecessors, has an enthusiasm for densification. He is currently considering reviewing the city’s density policy, which in theory seeks to constrain over-development – though in practice it has failed to do so. Khan is said to be considering allowing schemes with higher densities – and his office has published a research report regarding residents’ perceptions of high-rise developments and the impact of high density on quality of life.

Previous fires and other incidents, such as a helicopter crashing into St George Wharf tower in Vauxhall, have not led to a fundamental review of mayoral policy on high-rise buildings: policy which, in the past, has been driven by the impact of high-rise buildings on views of or from historic locations.

Perhaps this time the lesson will be learnt: London’s leaders must stop giving planning consent for high rise and they must make it illegal to wrap existing towers in flammable cladding. They must also rehouse all families, all elderly people and other vulnerable people in lower-rise housing. This was done by many councils during the 1980s – and if they are able to build the lower-rise social rented homes that Londoners need, then it can be done again.

Duncan Bowie, Senior Lecturer in Planning and Transport, University of Westminster Duncan Bowie is a member of the British Labour Party and of the Labour Housing Group.

Nadia, who is helping survivors of the Grenfell Tower Fire