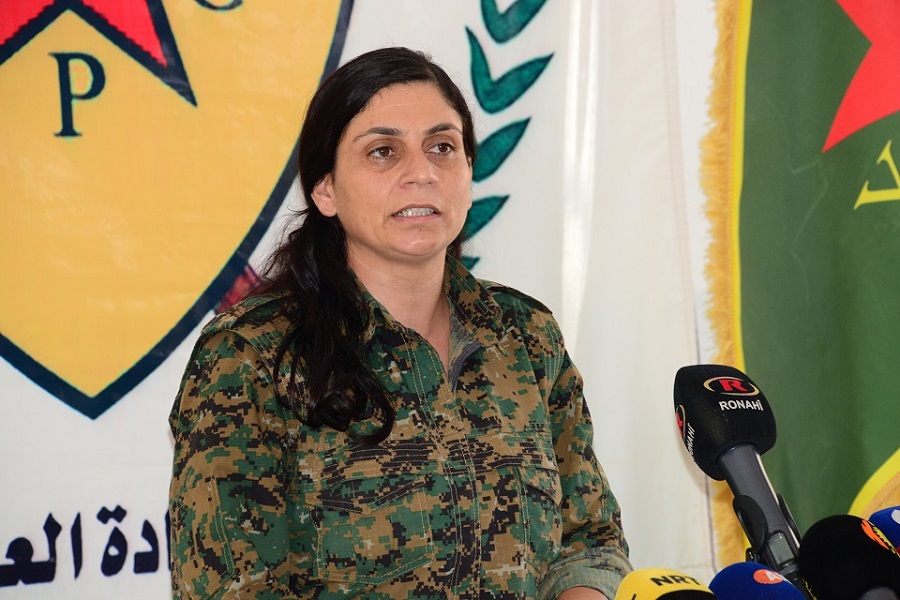 The battles surrounding Mosul, Aleppo and Raqqa are in the news. This same news from which the Kurdish people themselves have almost completely disappeared. Yet they are fighting against Daesh in Syria as well as in Iraq. Commander Sozdar Derik, is a member of the Military Council of the YPG (People’s Defence Units). We reached her while she was still on the frontline around Manbij.

Could you tell us what is the current situation on the frontline?

I can say we are living in a situation of total war and, at the same time, we are witnessing an incredible resistance, from Rabia to Shengal. The operation “Martyr Rubar” has been launched to open a corridor as far as Tel Abyad so that we could unite the Canton of Cezira to the Canton of Kobanê.

We have won important battles and gained ground. The people have been brave and have never given up. We, the YPG and the YPJ, have led a group of forces to victory. Now our cadres are also fighting together with the so called Syrian Democratic Forces. This joint struggle has secured significant victories in Northern Syria and we can say that up to now Daesh has had no chance to defeat us on any of the fronts we are fighting on. On the contrary we are bringing the fight to Daesh wherever they are.

For example in Manbij?

Precisely. Manbij was a city that Daesh had occupied but we had launched an attack on the city in the past weeks. We witnessed days of intense and fierce battle, for them it was a matter of life or death, to the last man. They have used all their weaponry, men and best forces. But they have been defeated and they had to accept defeat. Of course life has by no means got back to normal, indeed it’s still very dangerous here and we are ready for any eventuality. On a more general level, we are present in and we control several areas of Syrian territory. In fact, I think it would not be pretentious to say that we, the Kurds, have been the only force fighting Daesh since the very beginning. And not just in Syria.

We can say, that right now, everyone is at war: there are those who want to defend their own interests and work together, and those who would normally be enemies and yet want to gain something from this situation. Some really want an end to Daesh, but others want to benefit and take advantage from this situation of chaos, they don’t want nations to gain their basic rights and freedoms. There are at the moment uprisings involving all nations, Kurds, Arabs, Armenians, Turcomans.

You are fighting alongside Arab forces, thus showing it’s not true that Kurds don’t want to mix with Arabs.

That is true. Look, this is not only a physical war it’s also a political one: this is why there are forces trying to hide and deny our successes. For example Kurds and Arabs are fighting together in the North of Syria against Daesh and the Al Nusra Front. Yet, there are neighbouring countries which are against this, they don’t like our victories and gains. We don’t want any hostility with our neighbouring states nor with the Turkish and Arab people. We would like to have good relations with our neighbours and we want to live in fraternity. We have no desire for anybody’s land nor are we interested in starting any war between any people. Our enemy is Daesh. We are fighting against this brutal force and will continue to do so until the threat they represent is crushed. We believe in fraternity between peoples, we believe in the freedom of people and we are fighting against Daesh keeping these principles foremost in our minds. We believe that this struggle deepens the friendship between peoples. All the nationalities living here believe that. That’s why we fight shoulder to shoulder on the same fronts.

Several media have published news about the presence of special units from the American and French armies fighting with you. Can you tell us something about this?

In the last year we have been working with the Coalition Forces in our fight against Daesh. They help, above all, with air bombardments. I can tell you though that beside those air raids, they have also helped us on the ground: we have been working together on the ground, responding to specific requests from them. We will continue to work with the forces fighting against Daesh. We always said that. Clearly work on the ground is up to us because we are the ones who know the area as well as the life within the community, and it is crucial to have a good relations with the communities. Coalition Forces are strong and know their work well. This is all I can say.

Based on news and military progress of the last months, can we say Daesh has suffered a setback?

We can certainly say that the heaviest blows against Daesh in Syria have come from our forces. We won battles against them in Derik,  Til Hemis, Til Barak, Sedade, Gri Spi, Suluk, Ayn El Isa. The last victory was in Manbij where we fought together with the SDF forces. As you know from 2013 until mid 2014 Daesh was considered almost unbeatable. However in Til Kocer, in Shengal, in Rabia, in Cezaar we showed that we, the Kurdish forces of  the YPJ and the YPG, could stand up against them and beat them. This, despite the fact that we did not have enough weapons nor equipment. We were not getting any support from anyone. Despite that our resistance proved to be a winner. Two things we learned from this resistance: first, we were the only force fighting against Daesh and second, we were not only fighting against them, we were also driving them from our land. We showed this in Kobanê and in other areas in Rojava: we pushed them far from our lands. This was a big defeat for Daesh. And it was a great victory for the people who fight together and with determination. There had been problems among different peoples in these areas in the past, due to the policies of the Bashar al-Assad regime. But the reality is that these people have been living together for centuries. Now, with the new opportunity for life offered and developed in Rojava people are getting to know each other and reclaiming concepts like democracy in every aspect of  their lives. There are, clearly, still some problems, but they are small and can be solved.

The Autonomous Region of Rojava is no doubt a model of democracy, multi-cultural coexistence, where women play a prominent role.

Democratising gender relations has to do with freedom for both sexes. Starting from this paradigm, women’s involvement in Rojava comes as no surprise and it is indeed relevant. Kurdish women, we have to say, have always played an important role in Kurdistan’s social, political and cultural life. The revolution in Rojava has perhaps given more visibility to this role and Rojava has also become a symbol of women’s liberation after centuries of slavery. It also showed that women can play an important role in every aspect of life, including when it comes to facing a cruel enemy such as Daesh. Young women (and men of course) are fighting against Daesh who, in turn, are fighting a particularly vicious war against women in Kurdistan. Women are part of the land, culture, life of a nation but for Daesh they simply don’t exist, they are something dark, evil. In the YPJ ranks women who already have a consciousness about their role in society strengthen it, and those who don’t have such a consciousness, once in the organization, learn to recognise their rights and freedoms. In our struggle women have always been decision makers, never second to men. Maybe the Rojava Revolution has been the first to witness such a prominent role for women. Women’s liberation has intimately linked us to a democratic, free, ecological life as equals. Our comrades who lost their lives in this struggle will never be forgotten and perhaps women around the world can be inspired by this example and take their destiny and their life into their own hands.

The international appeal to support the reconstruction of Kobanê was not so successful. With the legitimacy you earned by fighting every day against Daesh, what message would you like to send to the international community?

Kobanê has indeed become the symbol of resistance against Daesh all around the world. Hundreds of people lost their lives, thousands got injured. The heroism shown by them is not something small. The whole world has witnessed this although this is a city which has been completely destroyed. Not only the city itself but also all the villages enclosed within its territory have been destroyed. Nearly 60,000 people were displaced, their houses were looted.

Yes, as you point out, not much help was given to Kobanê after its heroic liberation. Making propaganda or reporting what happened is not enough. All the people living in Rojava, not only those living in Kobanê, are facing huge political and economic problems. Yet the world is closing its eyes to all this. Every single door has been shut in our faces. This is a shame for the whole world. All the people living here, Kurds, Arabs, Armenians, Circassians, Turcomans, are in great need. No help was given to them. There were a lot of talks but no real help. We will do whatever it takes to defend our land: Daesh is our biggest enemy, but we are ready to fight them. We don’t need military help. Our call to the international community is to help our people to rebuild their lives, our call is for children, for women, for the elderly and the families of the people who lost their lives for this land. We don’t need words, but deeds. We also need political assistance to win political status for the people of Rojava. Any help given to the people of Rojava means accepting their political status.

Kurds have been deprived of every right. The greatest help for us then, would be for the international community to accept our identity and give us political status. This is what we would like from the people of the world. We wish victory for everybody.