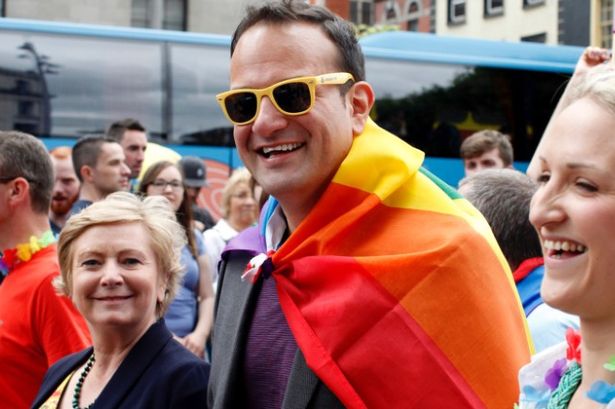 The 26 County Taoiseach, Leo Varadkar, has made his first visit north of the border since becoming Fine Gael leader. It certainly wasn’t an unnoticed visit, as the Taoiseach first called for a “unique solution” to the status of the Six Counties after Brexit and then attended a Gay Pride event.

Speaking to an audience in Queen’s University, Leo Varadkar said a second referendum on EU membership would likely have a different outcome than last year’s shock result. He stressed the need for greater understanding and co-operation between north and south in the face of the major upheaval being caused by Brexit.

“I would hope unionist parties for example, who would be keen to preserve and protect the union, would see how it is much easier to do that if in fact the United Kingdom stays in the customs union and stays in the single market because that takes away any need for any sort of special arrangement or bespoke solution for Northern Ireland at all,” he said.

Undoubtedly, Varadkar’s matter-of-fact tone has unsettled unionists. The Taoiseach appears to have deliberately drawn a line under the policy of ‘creative ambiguity’ maintained by successive Dublin governments when dealing with Anglo-Irish relations.
DUP MP Jeffrey Donaldson accused the 38-year-old Taoiseach, who had said he had a limited memory of the conflict from his childhood, of setting Anglo-Irish relations back to the 1970s and 1980s.

The DUP is also understood to be infuriated by the openly gay Taoiseach’s appearance at a gay pride breakfast on Saturday morning amid a debate over marriage equality in the North. The Six Counties is the only area in Ireland or Britain where gay marriage remains an impossible dream. The DUP is deeply opposed to any change in the status quo. As a rainbow flag flew over a government building near Stormont for the first time, Varadkar described marriage equality as a “strand one” issue, meaning it relates to the internal affairs of Six Counties, but something that could be envisioned for the future.

He told crowds outside the Pride event at the Northern Whig in Belfast on Saturday morning that he was not “here to unsettle anyone. But – he added – I am here to state my support and my government’s support for equality before the law and individual freedom for all citizens wherever they may reside”.

The Taoiseach was met by a Sinn Fein delegation. Gerry Adams described the meeting as “productive”. Adams welcomed Varadkar’s decision to participate in the Gay Pride event. “It is an important act of solidarity with the LGBT community and it also underlines the imperative of LGBT citizens in the North having access to the same rights, including marriage equality, that all other citizens enjoy in every other part of these islands.”

Adams also welcomed the Taoiseach’s recent comments on the need for the border between the EU and non-EU British state not to be on the island of Ireland. “I told Mr Varadkar that Sinn Fein’s view is that a designated special status for the North within the EU is the most effective way to defend the Good Friday Agreement, and to ensure that the two economies on the island of Ireland are protected during Brexit.”
Adams said this was an Irish solution to an English problem. “Let’s say loud and clear that the majority of people here voted against Brexit. So that has to be at the cornerstone of any way of preventing the English Tory party having their way on these matters”.

Adams added that ”What this all boils down to is whether unionism is clinging to the remnants of the old order or whether it’s prepared to accept that this state has changed utterly. I know it’s still in transition and so on but it has to be a state in which the rights and opinions aspirations of all citizens are both reflected and promoted and actively defended”.

Belfast, gay pride, ireland, Top, Varadkar
You may also like