‘Uniting Ireland and its People in Peace and Prosperity’ – summary 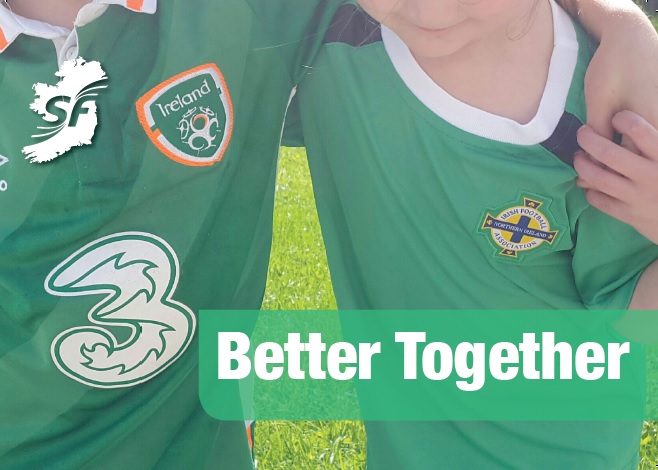 The Joint Committee on the Implementation of the Good Friday Agreement in its work programme approved by the Dublin parliament appointed Senator Mark Daly as rapporteur to compile a report on the effect of Brexit on Ireland, what Ireland should seek to have in the final agreement, particularly in the event of the people of the Six Counties voting for a united Ireland and what Ireland needs to do in order to peacefully achieve its constitutional obligation, as described by Attorney General Brady (2002-07), of a united Ireland. The following is the abridged introduction to the report and a summary of its recommendations.

Introduction (you can read the full report here)

High Court Justice Richard Humphreys book ‘Countdown to Unity’ is quoted from extensively in Senators Daly’s Report. Justice Humphrey’s publication lays out the road map to the peaceful unity of Ireland and its people. It outlines the various options for the future of this island and the opportunities and the obstacles that are ahead to achieve the aim of a peaceful united Ireland which was approved by 94% of the citizens of this state in a referendum.
Other than the New Ireland Forum of 1984, 33 years ago, the Library and Research Service of Leinster House were unable to find any report by any previous Government, Department or Oireachtas Committee on how the state would achieve its core belief of a united Ireland, an objective supported by 79 per cent of people in an opinion poll in 2016.
Professor Emeritus of Humboldt University in Berlin, Christain Tomuschat’s submission to the report outlines the precedent in German unification for Northern Ireland’s automatic inclusion in the EU without the need for an application or accession process in the event of a vote for reunification.
White House, National Security Council, Senior Policy Advisor on counter terrorism in President Obamas administration, Michael R. Ortiz has also written a paper for Senator Daly’s report on the threat of future paramilitary violence attempting to subvert a referendum and reunification as provided for in the Good Friday Agreement. Michael Ortiz was the first U.S. diplomat focused on countering violent extremism and was appointed by Secretary of State John Kerry.

Congressman Brendan Boyle a member of the US House of Representatives Foreign Relations Committee has submitted a specially commissioned research paper from the United States Congressional Research Office which is included in this report. This analyses the true nature of the income and expenditure of Northern Ireland. A report by Dr. Kurt Hubner of the University of British Columbia shows a reunification scenario with a boost of 35.6billion euro over eight years to an all island economy. The report for the Joint Committee also includes elements of the UK House of Lords report on Brexit; UK- Irish Relations with a particular focus on the common travel area, including proposals to ensure the continued free movement of people across the border with An Coiste um Fhorfheidhmiu Committee on the Implementation Chomhaontu Aoine an Cheasta of the Good Friday Agreement Northern Ireland. The economic challenges of Brexit and unification are outlined in various reports including some from the House of the Oireachtas Library and Research Service, a key one of these is the analysis of the United Nations Human Development Index, which measures health, education, and income. The UN report ranks Ireland as 8th in the world alongside Germany, Canada and the United States. In Northern Ireland’s case the analysis places it 44th in the world alongside the likes of Hungry and Montenegro. As a result of Brexit, Northern Ireland is likely to drop below 50th joining the likes of Kazakhstan and Belarus.

This report includes submissions by various politicians, academics and experts from Ireland, England, Germany and the United States who have given generously of their time and their experience to assist Senator Daly in compiling it, the first by any committee of the Irish parliament on how to achieve a united Ireland.
To conclude we include an extract from ‘Irish man of the 20th century’ TK Whittaker’s ‘Note on North-South Border Policy’ written on the 11 November 1968, the eve of ‘The Troubles’. In it he foresaw the Good Friday Agreement, the long term nature of achieving a united Ireland, that it required the best of ourselves and a collective understanding.
“We were, therefore, left with only one choice, a policy of seeking unity in Ireland between Irishmen. Of its nature this is a long-term policy, requiring patience, understanding and forbearance and resolute resistance to emotionalism and opportunism. It is not the less patriotic for that.”

Section 1 Recommendations: Brexit and its impact on Ireland

* The Irish government must negotiate for Northern Ireland to be designated with special status within the EU and for the whole island of Ireland to have a unique solution as part of the Brexit negotiation.

* If current EU funding programmes cannot be protected then the eligibility of Northern Ireland for receipt of EU Structural funds and other funding schemes and mechanisms must be clarified as a matter of urgency, to help underpin the peace process.

* The Report on the All-Ireland Economy: compiled in 2016 by Peadar Toibin TD for the Joint Oireachtas Committee on Jobs, Enterprise and Innovation in the light of Brexit should be updated.

* Given the likely impact on certain categories, including women, in border counties and employment in these areas there is a need for impact analysis on these sectors of society

* Welcome the declaration agreed to by the European Council on 29 April 2017 which provides for Northern Ireland automatically becoming part of the EU in the event of a future united Ireland.

* This declaration known in Brussels as ‘The Kenny Text’ is similar to that of Commission President Jacque Delors in January 1990 on the issue of German Unification ‘East Germany is a special case’.

* It is recognised that World Trade Organisation rules and a hard border would have a detrimental impact on Ireland North and South & Further impact assessment is required on the economic impact of reunification.

* The Committee urges that the matter of EU funding for Northern Ireland and the border region remains high on the agenda and an expeditious solution is found for successor programmes after 2020.An Coiste um Fhorfheidhmiu Committee on the Implementation Chomhaontu Aoine an Cheasta of the Good Friday Agreement

Section 4: Brexit and the Future of Ireland; Uniting & its People in Peace & Prosperity

* The establishment of a New Ireland Forum 2 is recommended to set a pathway to achieve the peaceful reunification of Ireland.

* Establish an international task force with experts in security so that plans to meet any risks may be devised and implemented.

* Fears and concerns of the Unionist community need to be examined, understood and addressed comprehensively by all stakeholders in advance of any referendum.

* Explore potential solutions to resolve disputes that may arise from the implementation of the Good Friday Agreement, as recommended by High Court Justice Kevin Humphreys.

Section 6: Referendum as Provided for in the Good Friday Agreement

* Lessons from referendums need to be learned to ensure that the Irish government fulfils its constitutional obligations.

Section 7: Constitutional & Legal Changes Before & After a Referendum

* The Government needs to carry out an audit in relation to the legal and constitutional changes pre and post-unification.