That time too, Walter, has left, like a painting or a book that hangs, birdlike, from your mouth, wide-open in surprise: your death mask’s endless labouring 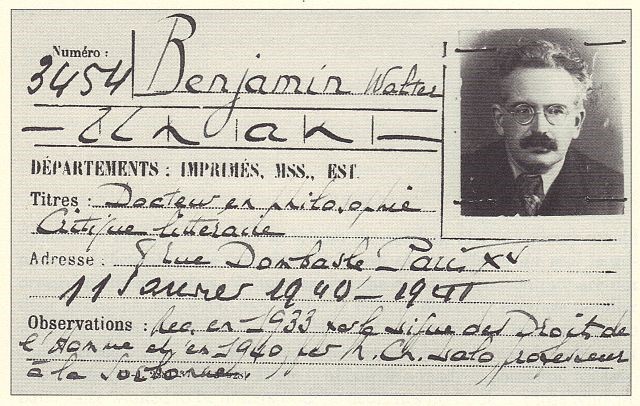 “…his death is recorded in the Portbou register as occurring at 10 p.m. on September 26, 1940…” (The Cambridge Introduction to Walter Benjamin, page 20)

i see a town littered with age and trees much like the council trash transfixed here daily in our wire-and-tinsel-estate. That time too, Walter, has left, like a painting or a book that hangs, birdlike, from your mouth, wide-open in surprise: your death mask’s endless labouring.  Much like this 20th century skull whose voice has swallowed all our secrets: more prophet than science to its greedy proletariat

“…even the dead will not be safe from the enemy if he wins.”

i see too a town, mindlessly littered with grief and trees and the dust of history already torn to shreds.  This old young-man wears the Hotel de Francia timidly beneath his restless refugee feet.  No one here knows he is the great intellectual father of criticism, messiah and revolutionary, Walter Benjamin!  So you are to be a man without end in a country of full stops, in a continent brutal in its punctuation.  A kind man too, maybe, in a cruel time, where all or nothing leaves only becoming.

It is late evening, Walter,

and the Autumn draws the curtains

The streets, these border streets, are growing dark. These years later now i know, know beyond a dialectical doubt, all things age but for the mystery of “you”, lost and frozen in that time and place, crossing the avenue for the last time, saying your goodbyes while a stream of thoughts like birds are set free from a fascist Europe with its Nazi heart and a totalitarian mind, to burn and burn all our profoundest, most incomprehensible books.

There is nowhere now, Doctor, they can fly to.

Years later, i read another writer’s lost letters from Europe after the war.  After your cheap and hasty funeral. Letters sent from Frankfurt and Heidelberg and Charles Haldeman’s Berlin. So here on this winter’s night in this cold council ghetto (this graveyard for our grief) i see ghosts, so many ghosts, these spectres of the living dead, their desperate hunger for a better world, like yours, Walter, one hundred years now, still making their way, all their brutal way back…from. the. dead.

«One Way Street is both an exposition of Benjamin’s ideas and a search for Benjamin the man in locations as diverse as the academics of Moscow, the bookstores of New York, Parisienne arcades and the cemetery in a Spanish costal village that has become a place of pilgrimage for Benjamin devotees. Scholars discuss the impact of Benjamin’s work, and the combination of interviews, stylized reconstruction and archival film results in a dynamic portrait of one of the 20th century’s most influential thinkers.» (https://www.artfilms.com.au/item/one-way-street-fragments-for-walter-benjamin)

poetry, séamas carraher, Top, Walter Benjamin
You may also like