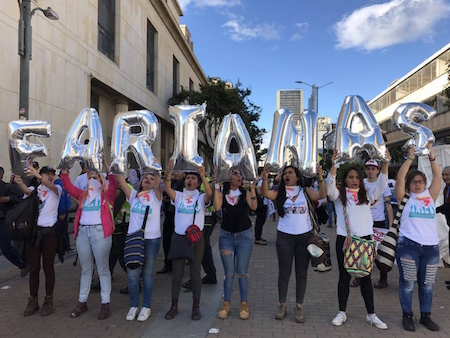 The women who have been in the FARC, recently issued a public statement, in which they express their open rejection of the smear campaign that some people and media are carrying on against the leaders of the new political party. They titled it: «Don’t play with the honour of FARC women”.

In my opinion, the comrades have put the accent where it really corresponds. What supposedly media like RCN and Blu Radio are defending, the rights of the victims of the FARC, actually turns into the opposite, shattering the honour of the former FARC women guerrillas, making them victims of the most vile of defamation.

What if nothing else could represent the recycling these media are doing of the stories of a woman, named Sara Morales, who claims to have been a guerrilla of the FARC for 11 years? The gentlemen of Blu Radio rejoice assuring that if there had been no peace process, she would never have achieved justice to her case and that of the other guerrillas.

Except it is precisely the other guerrillas who are speaking now, denying those stories according to which their passage through the guerrillas only meant the use and abuse of their condition by commanders and combatants, permanent rape, and implacable abortion for pregnancies generated by these violence.

Women in the FARC always enjoyed the highest respect and consideration, all of the women state this categorically and with notorious pride.

The only thing that clearly emerges from the statements of Sara Morales is that a decade ago she defected from the FARC. Surprisingly, having had two children fathered by combatants, she said that all pregnant women were forced to have an abortion.
The war is over and we would not like to talk about these things like that, but sometimes it is necessary.

Military intelligence uses psychological operations as a combat weapon, aiming to dominate the mind of the adversary and the population, in order to lead them to think in such a way that results in the final outcome of the war. That way was once called black propaganda and has always been one of its favorite tactics.

The spreading of a rumour, the invention, the panic, the manipulation of feelings, among other calculated manoeuvres, were always used to turn the population against the guerrillas. Corruption and the purchase of consciences were never absent. Despicable characters such as Rojas or Olivo Saldaña ended up becoming media figures.

The campaigns that during the last times of the conflict the National Agency for the Reinsertion and the military intelligence jointly carried out, beat every indecency. The Commission for the clarification of truth and the Special Jurisdiction for Peace will be responsible for the uncovering of such low degree of rot. I’m not going to do it here now.

But it is worth a slight reflection on the value of the traitor. It was his wife, Delilah, who gave Samson to the Philistines, as was Judas, one of the apostles of Jesus, who sold him for 30 pieces of silver.
I do not think anyone today applauds Efialtes for having shown to the Persians the passage of Thermopylae.
The Romans were betraying the traitors from the Tarpeya rock. Dante Alighieri, in the Divine Comedy, assigned them to the last circle of hell.

Without forgetting that in social and political conflicts, smear has always been the resource of the powerful to gain sympathy. How much contempt was in the Spanish empire description of the Inca Túpac Amaru, of José Antonio Galán, of Simón Bolívar. When Nelson Mandela won the Presidency of South Africa, his party was on the list of terrorist organizations.

All those who represent a risk to vested interests, inevitably are object of the most repugnant infamies. That’s why we feel calm, absolutely sure to disassemble each and every one of them.
In honour of their alleged impartiality, the media involved in spreading venom against the FARC leaders, should interview some of the thousands of former guerrilla women who today feel assaulted.

But they will not, because in addition to the hatred that feeds them, they play a role in the game of power, the least that interests them is the truth.
They are particularly concerned about guaranteeing that those who worked like them in the great businesses of the war can continue to do so in this new stage of the country, enjoying absolute impunity and returning to the government.

For which purpose it is useful to shred their adversaries. The Agreements that allowed them to enter open political participation.
It is worth making a call to the country, the era of manipulation must be left behind, it is time to materialize a change, to form a real alternative that will take us forever out of the swamp of corruption, violence and resentment.