Home > News > RIGHTS > IF FREEDOM OF THE PRESS IS DEMOCRACY, then what do you call this?

IF FREEDOM OF THE PRESS IS DEMOCRACY, then what do you call this?

According to the 2017 World Press Freedom Index, the world is becoming a more dangerous place for journalists to do their job

Defending media freedom has never been so important. Governments are becoming subtler in attempting to hide the truth. Journalists must become subtler too in uncovering it. (openDemocracy.net)

“We must all know that each mediocrity, each surrender, each act of complacency will harm us as much as the enemy’s rifles.” – Albert Camus 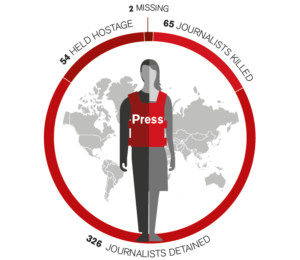 Governments and non-state actors limit the freedom of the press for a variety of reasons. The Obiangs and Berdymuhamedovs do it simply to hold on to power. The Rouhanis and Salman bin Abdulazizs, to “defend morality”. And the Erdogans and Maduros to stifle opposition, using social unrest as an excuse. The problem, however, goes well beyond Cold War era dictatorships, autocratic regimes and religious zealots. According to Freedom House, only 13% of the world’s population enjoys a free press and media freedom is becoming weaker in modern, pluralist democracies, such as Canada and New Zealand. Even in Europe, the region with the lowest level of media freedom violations in the world, it is losing ground: in the last five years, attacks on the freedom of the press have risen by 17.5%. If you think that Poland and Hungary are the only states to blame for the region´s declining performance, you better think twice.

Attacks on media freedom are not new, not even in formal democracies. What is changing is the nature of the attacks. Governments, criminals and other non-state actors have always tried to stop journalists from holding them accountable. Institutionalised censorship, political pressure and physical violence are not a thing of the past. Turkey, the world’s largest prison for journalists, is a good reminder of this reality. But according to Reporters Without Borders and Freedom House, states are using new, more subtle and sophisticated techniques to intimidate, harass and delegitimate journalists. These practices weaken our democracies and make them prone to manipulation and misinformation. The truth, as Orwell predicted, is on its way to becoming what our leaders want it to be.

Donald Trump is arguably championing the backlash against journalism worldwide. His crusade against journalists not only jeopardizes his country’s long-standing tradition for defending freedom of expression and media freedom, but opens the door for other politicians to do the same. Authoritarian leaders now think that it is normal to discredit and harass the press. The Egyptian government, for example, relied on fake news rhetoric to criticize CNN´s coverage of the terrorist attack on a mosque in Sinai. Libya did the same to discredit a CNN report on slavery. Nigel Farage in the United Kingdom and Beppe Grillo in Italy are among the admirers of this ideal method for distracting citizens and drawing their attention away from the real issues, which consists on focussing on the messenger rather than the message This is the means by which populists of all sorts seek to link journalists to “the Establishment”, and in so doing undermine the role of the media as watchdogs of power.

«Attacks on media freedom are not new, not even in formal democracies. What is changing is the nature of the attacks.»

Other countries are taking different paths to thwart media freedom. Andrzej Duda in Poland and Viktor Orban in Hungary, for example, are combining political and economic pressure to undermine independent media: they choke them by suppressing public sector advertising, while they favour government-friendly private outlets, and thus curtail media freedom. In Poland, in addition, purges in the public media are becoming common and the access of independent media to Parliament has been constrained. In Hungary, a leading left-wing opposition newspaper had to close down after seeing its distribution restricted, its subscriptions cancelled and its advertising drop dramatically after it exposed several cases of corruption in Mr Orban´s government.

But while indirect methods of repression seem to have become the new normal in illiberal democracies, the liberal ones, like Germany or New Zealand, are adopting measures that threaten the journalists’ capacity to find and protect their sources: persecuting whistle-blowers and introducing gag laws are direct attacks on media freedom and on their ability to protect the public interest. The Investigatory Power Act enacted in the United Kingdom is another example.

Sophisticated as the new methods to make it more difficult for journalists to do their job may be, most of them are not deadly. They may eventually kill our democracies, but journalists in Canada, Namibia or New Zealand are less likely to be shot than their counterparts in Mexico or Syria. As a matter of fact, Latin America and the Caribbean was the deadliest region in the world for journalists in 2017.

More journalists died in Mexico than in Syria or Iraq, even though the overall number of casualties around the world dropped slightly last year. What is worse, justice is not expected any time soon, as corruption and impunity permeate local power. Mexican journalists who cover political corruption cases and organised crime are systemically harassed, targeted and killed. The assassination of Gumaro Pérez Aguilando, who was shot while attending his son´s school Christmas pageant, speaks for itself. Criminals run free in Mexico, while journalists are killed with impunity.

Violence against journalists is an epidemic in many countries in the region. Reporting on police abuses and government corruption is a very dangerous activity in El Salvador, or Honduras, and the lack of protection mechanisms, corruption and political instability in Brazil explain why it continues to be one of Latin America’s most violent countries for journalists. As for Colombia, it still has a long way to go to fight off drug-related violence against media personnel.

Media freedom in Venezuela is very limited, as Nicolas Maduro does his best to silence local independent media and is fond of expelling foreign journalists. But in Bolivia too journalists have been targeted and threatened for expressing criticism of the government, which seems to have had problems digesting its defeat at the referendum which would have allowed President Evo Morales to run for yet another term in 2019.

As for Argentina, legislation enacted by President Macri encourages greater concentration of media ownership, which is already enormous, thus endangering pluralism and ultimately determining the disappearance of local media. Cuba, meanwhile, remains Latin America’s worst media freedom violator, and Costa Rica is, again, the exception in a region plagued by corruption and violence.

Walter Cronkite famously said that “freedom of the press is not just important for democracy, it is democracy”. In as far as he was right, we are today, slowly but steadily, moving towards a system of government that may look like democracy, but is not.

«The question we should ask ourselves is not if we can weather this storm, but what would happen to our societies if we were to fail in doing so.»

Autocrats and dictators are not alone anymore in trying to find ways to curtail media freedom by discrediting the messengers, undermining newspapers through economic coups, and passing laws against journalists and their sources – modern democracies do it too.

The question we should ask ourselves is not if we can weather this storm, but what would happen to our societies if we were to fail in doing so. Journalists should be aware that in today´s world, they are the last defence against manipulation and misinformation. Fact-based and serious journalism is not merely a demand, but an existential antidote against narcissistic nationalism, nihilism and resentment. Freedom of the press is not something you can give up one day, and reclaim the next. It is the means by which journalists hold power accountable. The day we stop using it, our democracies will become hollow concepts, devoid of any true substance.

Defending media freedom has never been so important. Governments and non-state actors are becoming subtler in attempting to hide the truth. Journalists must become subtler too in uncovering it. For there can be no democracy with a mute press.

(Manuel Serrano is an international affairs analyst, journalist and editor. He worked as Junior Editor at democraciaAbierta (2015-2017) and currently works as a freelance correspondent in Lisbon.)

This article is published under a Creative Commons Attribution-NonCommercial 4.0 International licence.

Reporters Without Borders, Top, Violence against journalists, World Press Freedom Index
You may also like