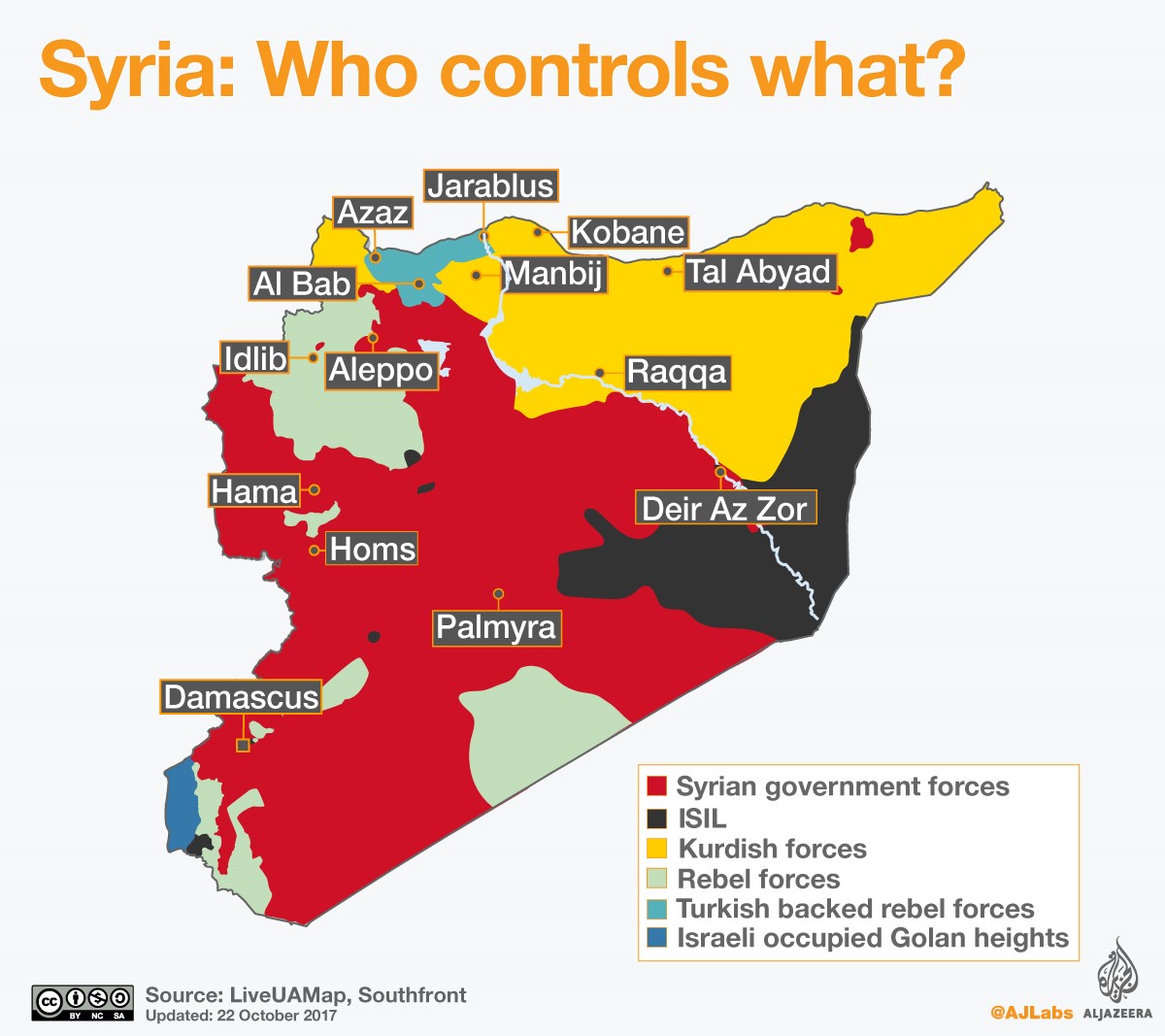 «We are not alone… Allah is with us,” Turkish President and Chairman of the ruling Justice and Development Party, Recep Tayyip Erdoğan

“Let Erdoğan come and look at the children he has killed. We will stay in our land till the last drop of blood.” Mustafa Hesen, Co-president of Afrin Canton

While the Turkish military invasion (with the Orwellian title «Operation Olive Branch») of the Afrin Canton in Rojava continues into its third day with reports of civilian casualties mounting, there has been an international response to the NATO ally and recent-alleged war-crimes perpetrator (from its recent military attacks in Northern Kurdistan): Turkey.

Despite significant tolerance for Turkey’s treatment of its Kurdish minority, international opinion has largely been critical of this new phase in the Syrian Civil War, at a time when hopes for a de-escalation of the ongoing humanitarian crisis in the Middle East were being supported.

Syrian President Bashar al-Assad condemned the incursion, saying: «the brutal Turkish aggression» on Afrin was part of Ankara’s policy of «support for terrorism» in Syria. (BBC) On Friday the Syrian government threatened to shoot down Turkish fighter jets if they fly into its airspace. So far, there is no sigh of this happening…

Syria’s Allies: Iran and Egypt have also condemned Turkey’s attacks; Iran calling for a quick end to the operation «to prevent a deepening of the crisis» in Syria. The Foreign Ministry of Egypt condemned the Turkish state’s “unacceptable” attack pointing out that «Turkey negatively affected the political efforts for the ending of terror in Syria» and saying; “The attitude of Egypt towards military methods is clear as attacks against our Syrian brothers and sisters are increasing.” (ANF)

«They warned us before they launched the aircraft they were going to do it, in consultation with us. And we are working now on the way ahead,» US Defence Secretary Jim Mattis told reporters on Sunday. (BBC)

A statement by State Department spokesperson Heather Nauert on Sunday also asked Turkey to be «scrupulous to avoid civilian casualties.»

Despite having a strong relationship with Kurdish forces in the area it is assumed wider considerations (ostensibly attempts to make a deal with Russia in regards to the Ukraine and North Korea) explain America’s weak response to this attack on one of its few regions of influence in the area.

France, is reported to be urging restraint on its NATO ally, Turkey. Reuters reported that French Foreign Minister Jean-Yves Le Drian called for an emergency meeting of the United Nations Security Council on Sunday:

“’Ghouta, Idlib, Afrin – France asks for an urgent meeting of the Security Council,’ Le Drian said on his Twitter feed. He added that he had spoken with his Turkish counterpart on Sunday morning.»

Germany: «Turkey has legitimate security interests along its border with Syria, We hope and expect that Turkey will continue to exert political and military restraint.» Meanwhile Kurdish media report that German Leopard 2 A4 tanks are being used by the Turkish army against the people of Afrin. «The German federal government did not want to comment on the question of whether the pictures show «Leopard 2″ tanks.» (ANF)

The U.N. Security Council: has said it will hold an emergency meeting on the situation on Monday, 22nd January. Moscow will demand Turkey halt its military operations at the UN meeting, according to Russian senator Frants Klintsevich, who is the deputy chairman of the defence and security committee.

“Turkey’s military attacks on Afrin, which will cause huge civilian casualties, are wrong and must be condemned.

We have already seen the human rights violations that the Turkish army have committed against Kurds in south-east Turkey and it is clear their brutal tactics will be replicated in Afrin.

The Kurdish People’s Protection Units (YPG) have been successfully fighting Da’esh (ISIS) in this region.

Turkey’s attacks will hamper the fight against Da’esh, which is not completely surprising given the many questions surrounding Turkey’s covert support for radical jihadist groups in the region.”

Support for the violence?

Azerbaijan seems to be one of the few states who have come out in public support of Turkish aggression against the predominantly Kurdish region. Their Foreign Ministry’s spokesman, Hikmet Hajiyev said on Sunday that Azerbaijan condemned all kinds of terrorism and voiced support for international efforts to counter them.

While at the same time on his Twitter account, British Foreign Secretary Boris Johnson wrote: “Turkey is right to want to keep its borders secure.”

The Turkish Cypriot Prime Minister Hüseyin Özgürgün said his greatest wish is the successful outcome of the Afrin operation: «Turkish Cypriots stand with motherland Turkey and Turkish soldiers at heart» he tweeted. (Andalou)

The Turkish opposition party, the HDP have called for protests.

“In order to protect the will of co-existence and peace among nations against the invasion attempt of Afrin, we will hold a press conference and take to the streets on Sunday and Monday against the aggressive politics adopted by our government and the parties which support them.

As long as this occupation continues, we will not stop. Just as we supported Kobane, so we will support Afrin.

We should never be silent witnessing this situation. We ask our people to take to the streets to make their voice heard and to show their pro-democracy views.”

The Turkish Socialist Party of Refoundation issued a statement condemning the assault: «This Afrin attack, initiated to boost the institutionalisation of the fascist dictatorship and to reintegrate it into the Syria game of which Turkey has been pushed out recently. However, the attack, as well as the manipulations of the imperial powers, will be subject to failure as Kurdish people will show an unprecedented resistance as they did in Kobane.»

The siege of Kobane (2014-2015) caused a wave of protests in Turkey by the country’s Kurdish community against the Turkish state whom they accused of being an accomplice to ISIS/ISIL/Daesh in their murderous attacks on the Kurdish town.

Now reports coming in from Turkey say police have broken up demonstrations in Ankara and Istanbul over the weekend, hours after Turkish President Recep Tayyip Erdoğan warned Kurds in Turkey not to take to the streets to protest the military operation.

The Dogan news agency said police detained 12 demonstrators in Istanbul who were protesting the offensive. It said police used tear gas to disperse a separate protest in the capital Ankara. President Erdoğan had earlier warned that those who heed calls by Kurdish politicians to protest would «pay a high price.»

As seems to be the case in general now in Turkey, Turkish Foreign Minister Mevlut Cavusoglu told reporters on Sunday that anyone who opposed the action in Afrin would be deemed as siding with terrorists and would be treated accordingly.

“A Duty of Honorable People of the World”

“This step of the Turkish state is a violation of borders, an abuse that should be taken to the international courts. The United Nations Security Council or no state has ever fulfilled their duty in this regard. As Iranian lawyers and human rights defenders, we ask the international community to take steps in order for this invasion to end. The Turkish state is committing a crime, for which it must be brought to account. International forces can do this.

We have a mission to remind every state, institution and organization of their human and moral responsibilities. Attacks of the Turkish state must stop immediately. International human rights organizations and honorable people of the world should raise their voice for Afrin.”

Earlier in the week-end academics and international human rights activists such as Noam Chomsky, Michael Hardt, Debbi Bookchin, and David Harvey launched a petition «calling upon world powers to act against Turkish aggression against Afrin«:

“We, the undersigned academics and human rights activists, insist that the leaders of Russia, Iran, and the U.S. ensure that the sovereignty of Syrian borders is not breached by Turkey and that the people of Afrin in Syria, be allowed to live in peace.

Afrin, whose population is predominantly Kurdish, is one of the most stable and secure regions in Syria. With very little international aid, Afrin has taken in so many Syrian refugees in the last five years that its population has doubled to 400,000. Afrin is now surrounded by enemies: Turkish-supported jihadi groups, al Qaeda, and Turkey…

…An attack of this kind against the peaceful citizens of Afrin is a blatant act of aggression against a peaceful and democratically-governed region and population. Turkey cannot carry out such an attack without the approval of Russia, Iran and Syria – and inaction by the U.S. to stop it. The Kurdish people have endured the loss of thousands of young men and women who joined the YPG, and YPJ women’s force, to rid the world of ISIS. The U.S and the international community have a moral obligation to stand behind the Kurdish people now. We call on U.S. officials and the international community to guarantee Afrin’s stability and security and prevent further Turkish aggression from within Syria and across the Syrian border.»

Meanwhile all across Europe people have taken to the streets to show their revulsion and anger at the invasion.

In Copenhagen demonstrators protested the Russian and US regimes’ decision to allow Turkey to launch a military operation against Afrin. Likewise in Oslo and Stockholm in Scandinavia.

In the Swiss city of Lausanne, and in Bellizona, the capital of the Ticino canton of Switzerland as well as in Bern.

In Austria, Kurds in Vienna and called upon international powers to act against Turkish aggression in Afrin. Also in Graz, in southeast Austria.

In Germany, there were protest marches in Cologne, Hannover, Duisburg, Kassel, Saarbrucken, Dresden, Frankfurt, Hamburg and Berlin. «Demonstrators carried YPG/YPJ flags which were banned in the country and condemned Russia, the US and the European Union for not doing enough to stop the Turkish invasion on Afrin.» (ANF)

In France: in Bordeaux, in Lyon, in Marseilles, Montpellier and in Paris where thousands of Kurds and their supporters called on the French government to intervene and do everything to stop Turkish aggression towards Afrin. The Kurds in Lyon were joined by Lyon’s Partisan organization and the Young Communists in their protest action in front of the city hall.

In England, protest demonstrations were held in Liverpool and Manchester.

In Torino, Italy a protest was held in front of the RAI TV channel building. «Several Italian groups showed solidarity with the activists.» (ANF)

Rami Abdul Rahman’s Syrian Observatory for Human Rights (SOHR) claimed early on Monday that 18 civilians had so far been killed in the Afrin region. Most of those killed were in Turkish air strikes over the weekend.

Funerals were also held on Monday 22 January for 14 civilians and two YPG fighters killed in Turkish Air Strikes on the first and second day of the assault. The Co-president of Afrin Canton, Mustafa Hesen responding to «the Turkish state portraying civilians it has massacred as YPG fighters» said: “Let Erdogan come and look at the children he has killed. We will stay in our land till the last drop of blood.”

The YPG have also claimed at least four Turkish soldiers and 10 Syrian rebel fighters supporting them were killed in clashes on Sunday morning. There has been no confirmation so far from Turkey.