Just over a week into the Turkish military assault on Rojava, conflicting reports give varying updates on the situation in the Afrin canton 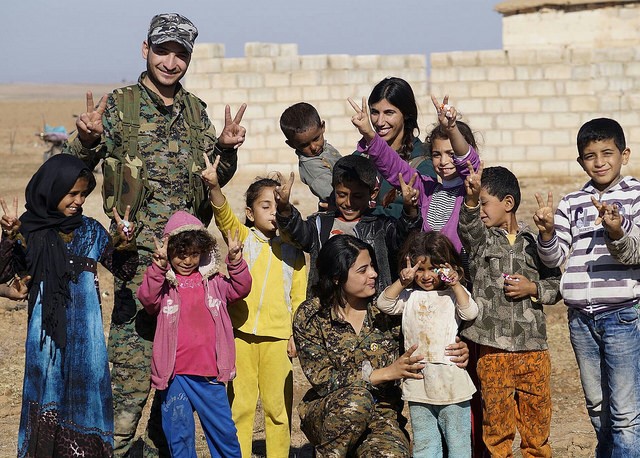 “We will pulverize anyone standing in front of us…” Recep Tayyip Erdoğan, Turkish President and Chairman of the ruling Justice and Development Party

Just over a week into the Turkish military – (with the participation of the Islamic factions of the Free Syrian Army) – assault on Rojava, conflicting reports give varying updates on the situation in the Afrin canton, in particular the progress of the Turkish war machine with its sophisticated technology focused on the Kurdish and Syrian Democratic Forces (SDF) guerillas, but more importantly, on the casualty figures for these initial days of the ‘operation’.

One thing for sure: innocent civilians are dying…

Despite Turkish sources (and most international media) echoing Recep Tayyip Erdoğan’s chant of a short sharp (“justified”) shock against the PKK/PYD/Kurdish “terrorists” (depressingly last week, Al Jazeera actually travelled with the Turkish Military the enormous distance from the border to Azaz, a Syrian town just across the Turkish border – already controlled by the Turkish-backed Free Syrian Army militias – to demonstrate the “success” of the Turkish war machine)…so it might not be incorrect to say that this ‘machine’, despite being one of the best equipped armies in the North Atlantic Treaty Alliance is, despite President Erdoğan’s wishes, bogged down in the difficult terrain of the Afrin countryside…

But still, one thing is certain: innocent civilians are dying…

Likewise, in this first week of war, despite early reports of numerous villages being taken by Turkish assaults, it would appear instead that a grim struggle is being waged in this beautiful countryside at the behest of cynical politicians terrified of losing their grip on power (both at home and within this tormented region) …as well as their authoritarian grip on the people from who it comes…

And, in the meantime, innocent civilians are dying…

The Syrian Observatory for Human Rights

SOHR produced a summary of actions and casualty figures from their sources in the area at the end of the first week of the assault:

“The Syrian Observatory for Human Rights also monitored the continuation of artillery and missile shelling operations by the Turkish Forces, on places in Afrin area, which caused more material damage in the citizens’ property, while the Syrian Observatory for Human Rights had documented the death of 33 at least, the number of citizens who have been killed since the “Olive Branch” Operation was launched on the 20th of January 2018… the number of citizens who were killed by the Turkish aerial, artillery and rocket shelling on several areas of Afrin located in the north-western countryside of Aleppo, and the number of casualties may increase because of the presence of a large number of injuries, some of them have seriously wounded.”

ANF released a press statement from the Syrian Democratic Forces/YPD who said that “despite having technological advantages, NATO weapons and German tanks, Turkish army couldn’t make any advances against SDF fighters and suffered heavy losses.”

“… 308 Turkish soldiers and gang members, including four officers and one gang leader, were killed in the last seven days.

59 civilians were killed and 134 were wounded by the Turkish army and 43 SDF fighters lost their lives during the clashes.

The balance sheet of the Turkish attack against Afrin, Manbij, and Kobane as released by the SDF is as follows:

Three civilians were killed as a result of Turkish army’s artillery and mortar attacks.”

Additional figures (from The Independent) for SDF/PYD dead from Afrin hospital: “…according to Dr Polat, he had received only four YPG fighters dead and two wounded on the first day of the Turkish assaults, another seven fighters and nine wounded later in the week.” (Robert Fisk)

Robert Fisk, the Middle East correspondent for The Independent and the author of “the first Western media report from Afrin since the start of the Turkish offensive” visited the Afrin area, interviewing survivors of the so-called “surgical strikes” by the Turkish Air Force as well as visiting Afrin Hospital and speaking with Dr Jawan Palot, its director.

“Ironically, since the Turks are supposedly aiming at Kurdish YPG fighters, the very name of their military assault on Kurdish Syria, Operation Olive Branch, makes one’s gorge rise in the stone village of Mabeta, surrounded as it is by olive orchards…”

Mabata is where Turkish warplanes struck at 04:00 Friday morning, 26th January and where an estimated seven people from the same family lost their life in the bombardment.

The Dead Have Names, President Erdogan

“The list of the dead – 10 children, seven women, 17 men – is bleaker, for the hospital had not bothered to catalogue their wounds. They include infants.”

One-year old Wael al-Hussein, a refugee from the village of Jebbarah, killed on 21 January,

Six-year old Moussab al-Hussein from Idlib (clearly from another refugee family) on the same day,

60-year-old Fatima Mohamed from the village of Arabo was killed in Jendeeres on 23 January, and

Abdulkader Menam Hamo from Jamo was killed on 24 January.

Four members of the al-Khater family died when a Turkish shell hit their home in Maabatli: “Taha was 40 years old, his wife Amina the same age, Zakia was 17 and her bother Suliemann just 14.” (Safa, who is 19, survived…” but of course she is now an orphan.”…)

Mohamed Hussein, a 58-year-old Kurdish farmer, from Jendeeres, wounded in the head and eye after his home was bombed by a Turkish aircraft on the second night of the attack…

15-year old Dananda Sido, “terribly wounded in the legs and chest running in the street from a Turkish air attack in the Kurdish village of Adamo”…

Ahmad Kindy…who took his family out of the village when Turkey’s Olive Branch first cast its shadow over the land early on 21 January, but who unwisely returned and was hit in the back by shrapnel…

20-year old Kifah Moussa, “who was working in her family’s chicken farm at Maryameen when Turkish planes dropped a bomb on the building at midday, killing an entire family of eight people beside her? She was hit in the chest”…

Seven-year old Aya Nabo, with severe chest wounds…hit in the street on 22 January…

Three-year-old Hamida Brahim al-Hussein, from Maryameen, who was wounded in the head in the chicken farm attack in which Kifah Moussa was injured…

Sudqi Abdul Rahman, who is 47, was wounded in the leg by shrapnel at Ruzio-Jendeeres on 25 January…

75-year-old, Shamsa Moussa, is listed as receiving “multiple broken bones” in the village of Rajow on 23 January…

“We all know who did this…” says Robert Fisk. “The Turkish news agency Anadolu stated blandly that Turkish aircraft bombed more than 100 “targets” – including an “airfield” (mysteriously unnamed) – on the first day of the attacks. The operations supposedly targeted YPG “barracks, shelters, positions, weapons, vehicles and equipment”.

…And long after the politicians have stopped talking, the troops returned to their barracks, tanks and armoured vehicles parked, guns unloaded, there will still be families grieving their losses, whole families whose names will never be remembered, homes and villages and towns with only ghosts left…to rebuild them.