Ehmedê Huseyin: ”Artists can create life from death. The role of the intellectuals during the war times is very important. Neim Square was a place of fear and death but today it has become the square of colour, happiness and beauty” 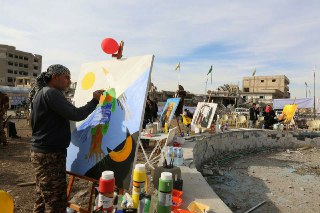 This article was written by Azad Evdike, a film director from Serekaniye (Cizire Canton) and promoter of the project Banoș Film.

Translated from Kurdish by Suna Alan

Raqqa was occupied by Daesh some four years ago. Here the Caliphate tried its rule, by imposing a strict code of conduct to citizens who could not escape. Thousands had managed to flee, but for many those four years under Daesh would prove to be a nightmare.

The men of the Caliph didn’t have any problem in stealing, destroying, killing civilians when they disobeyed the rules, of simply for being “infidels”. Raqqa was declared the capital of the Caliphate and literally fell into darkness.

The few testimonies and images to come out of the city spoke of death, executions, beheading, rapes of women, men and women reduced to slaves…

These scenes will not be forgotten by the people of Raqqa as the city’s central square, Neim Square was transformed into a river of blood.

On 15 October 2017 Raqqa city was liberated by the Syria Democratic Forces (SDF), conformed mainly by Kurdish militias of the YPG and YPJ (People’s and Women’s Protection Units) and by Arabs, Syriacs, Yezidis, Caucasians, Armenians militias.

Supported by People’s Protection Units (YPG), The Western Kurdistan Intellectuals Association (HRRK) at the end of December, organised a symposium and exhibition called ”Art against War”. Nine artists including three women participated in the cultural initiative, the first of this type in Raqqa after its liberation.

Representatives of the People’s Defense Unit (YPG), the Women’s Defense Unit (YPJ), The Syria Democratic Forces (SDF) and the people of Raqqa, Ên Îsa, Tepqa and Kobanê, spoke at the event and then went to what was left of Mary Church where a meal was organised.

The chair of the West Kurdistan Intellectuals Association, well-known poet Ehmedê Huseyin, celebrated the organisation of this event and said: ”Artists can create life from death. The role of the intellectuals during the war times is very important. Neim Square was a place of fear and death but today it has become the square of colour, happiness and beauty. We want to organise more events like this”.

Painter and the promoter of this project, Ferhad Khalil said: ”Since the time I came from South Kurdistan, after five years away from the West, I observed a huge and remarkable change of the society here. I realised that my duty is to help and serve this community. We, as artists – he added – can fight against war, occupation and destruction. Our colours are making this life beautiful and become a bridge for the establishment of civilization and democracy”.

Khalil added that “The Democratic Syria Forces liberated both the land and humanity because of this reason I suggested this project to some painters. Then we proposed it to the West Kurdistan Intellectuals Association (HRRK) and they accepted the project. We were very happy with the start of this work and the greatest happiness was that the YPG’s Defense Units were part of this project”. The most interesting thing, said Khalil, “is that people in the exhibition are mostly from Raqqa. This Square was a place of darkness, beheadings. Here women were sold to be slaves but today it has become a place of joy, happiness and colour”.

Wearing her military uniform Women’s Protection Unit (YPJ) member and a painter Sema Kobanê spoke at the symposium and said: ”I promised myself that I will not leave my weapon nor my paintbrush. It is true that we are in a time of war but terror should end. That’s why it is still the time of the rifle. But life becomes beautiful with art and this is why colour and my paintbrush represent the future. I am here today in this Square so that I can remove the darkness and paint my color.”

One of the citizens of Raqqa said: “It has been a few years now that I wasn’t able to walk through this Square due to the fear of Daesh as it was a place of death and beheading. But today with a joy in my eyes I see beautiful colours of this Square”.

I also got involved in the project with my camera.

I was taking photos of the scenes in this place; and one of my painter friends was painting them beautifully; and people here were singing folk songs in this Square and dancing.

I was very happy that my camera was recording all these happy scenes. I can’t forget the little girl who was dancing in this Square; I saw the freedom in her smile, on her face and her eyes. Every time we heard the sound of explosion from the battlefield, sometimes weaker and sometimes louder, I saw happiness and the the beauty of the people surrounding me.

We were only focusing on the happiness and, at that point, the explosion became yet another noise and we could actually ignored it.

I am so proud to have been able to give my contribution to such an important project. 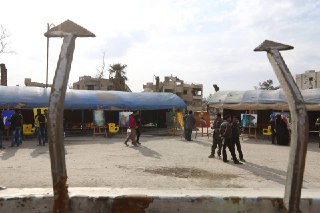 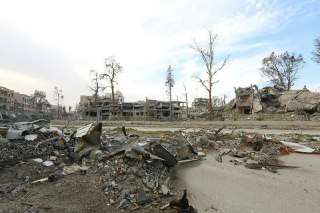 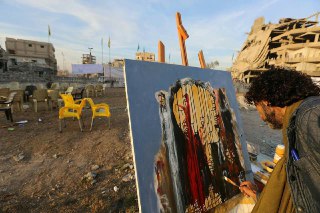 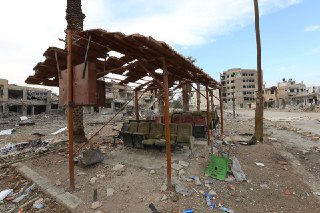 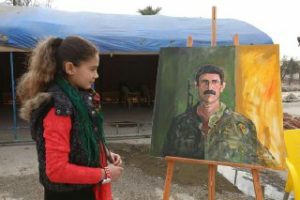