DUBLIN – DAY OF PROTEST FOR AFRIN

Following the many worldwide protests against the Turkish invasion of the independent Kurdish region of Afrin in northern Syria, Ireland’s Kurdish community staged their protest in the heart of Dublin’s centre, O’Connell Street (Sráid Uí Chonaill), on Wednesday 28th March 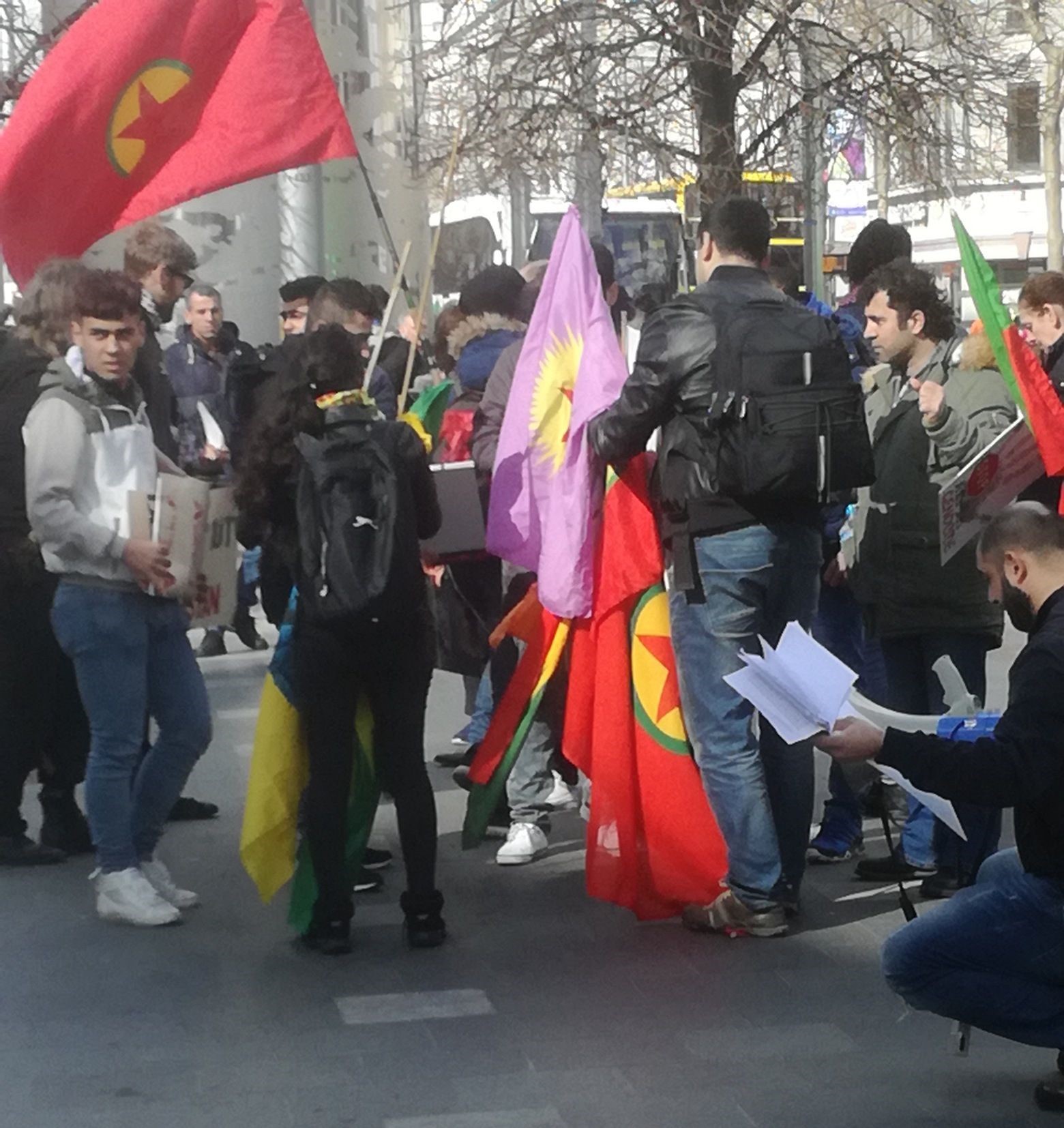 Following the many worldwide protests against the Turkish invasion of the independent Kurdish region of Afrin in northern Syria, Ireland’s Kurdish community staged their protest in the heart of Dublin’s centre, O’Connell Street (Sráid Uí Chonaill), on Wednesday 28th March.

A small but committed group of protestors denounced the unprovoked Turkish assault on an innocent community with the tacit acceptance of its NATO allies, as well as the other major ‘players’ in the Syrian civil war: Russia and the United States.

Along with the Palestinians and other ‘minority’ groups facing repression, the Kurds have to be the most oppressed of peoples, with an estimated 35 million Kurdish people forced to live – either in one of four regimes where their very presence, and not only their culture and wellbeing, is only recognised as something to fear and  suppress – or in exile.

Turkey, with 14 million Kurds (almost a fifth of Turkey’s population) living mostly in its south-east (in, of course, Northern Kurdistan) has proven to be the implacable enemy of the Kurdish people with its current cynical and nationalistic right wing AKP regime willing to use any methods to stay in power, as seen in its recent bloody adventure into the Democratic Federation of Northern Syria-Rojava, becoming just the latest chapter in what is becoming a litany of war crimes and human rights abuses against the Kurdish people along with a dictatorial intolerance for democratic opposition at home.

These abuses, along with the hundreds of civilian deaths in the recent assault on Rojava, were strongly voiced to a Dublin population, many of which know little of the long war of oppression against the Kurds, but who are encouraged to take their holidays in Turkey, ignorant that whilst the current AKP regime of President (and Chairman of the ruling Justice and Development Party) Recep Tayyip Erdoğan rules, Turkey would be a better place for human rights monitors to visit its extensive and overcrowded prison system and not its bars or its beaches; as a new campaign to boycott Turkey, both goods and holidays, has been started to point out.

“Turkish troops Out Of Afrin!” “Terrorist Erdoğan!” “Erdoğan is ISIS!” alerted the ‘average’ Dubliner going about their business to the fact that a few hundred metres from the famous statue of James Larkin, the Irish revolutionary trade unionist who said: “The great only appear great because we are on our knees. Let us rise!” – what now has to be the conscience of our very corrupt and powerfully controlled world (how else would the likes of NATO, the US, Russia and the EU allow a flagrant violation of international law to continue by one of its allies, with no more than a few pathetic squeals of protest) – these Kurdish people in their diaspora – have now arrived in one of the many countries that freed itself from foreign domination in the 20th century.

Watching these courageous and welcoming people in their struggle against some of the most oppressive and powerfully armed regimes on the world, we can only be sure that their will to be free will see a liberated Kurdistan in this century, maybe and hopefully so, a federation of free and equal peoples, like the experiment currently being laboured at, struggled for and under vicious attack, in Rojava, western Kurdistan-northern Syria.

In the meantime it is the responsibility of the international community, that is, starting with ourselves, to listen to our own conscience and to emerge from this temporary if comfortable sleep the West has bequeathed us and to take a stand for a world of freedoms and economic rights for all, a world of human rights and a respect for all life and an end to the tolerance we show for these bullies and dictators that would have us all eternally grateful for the slavery they offer.

Especially and urgently now, as the arrogant Turkish war machine prepares to move against the rest of free Rojava…

“The great are great…” because the rest of us are too long on our knees, or asleep…

Time for the world to recognise Kurdistan’s and its people’s right to exist.

On the same statue on O’Connell street, near where the protesters named the real terrorists in northern Syria, there is a quote from the Irish poet Patrick Kavanagh’s poem ‘On the Death of Jim Larkin’:

‘And Tyranny trampled them in

Until Jim Larkin came along and cried

The call of Freedom and the call of

And slavery crept to its hands and

And Nineteen Thirteen cheered from

Degradation of their miseries.’

What more can be said, other than:

Time for people to raise their voice in support of a free Kurdistan.

Protest organised by: the Kurdish Irish Community in Ireland