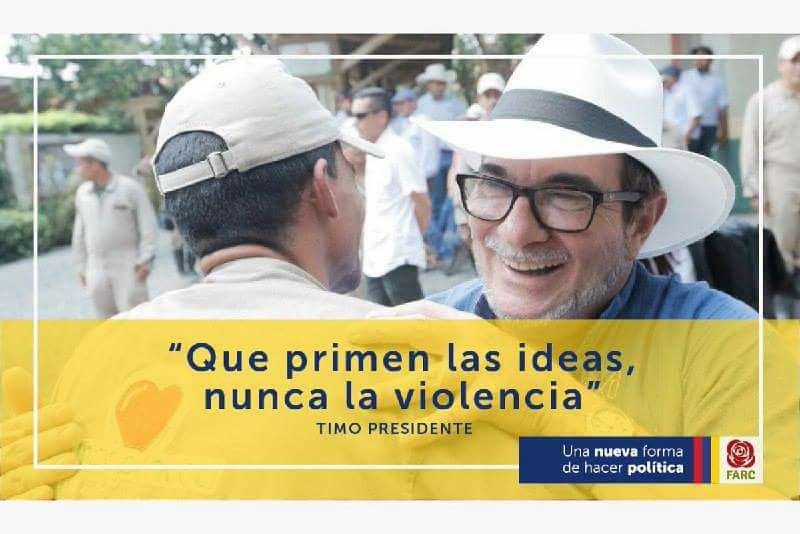 One sunny morning in October 1992, in a van that I boarded in the San Jorge neighborhood, south of Bogotá, I was driven by a peasant from the area to San Juan del Sumapaz.

From there I started the trek for several days to a place called La Guitarra, located in the middle of the moor, guided by other travelers I encountered on the way.

Our destination was the same, the camp of Timoleón Jiménez, the youngest member of the National Secretariat of the FARC, a command line trained by Manuel Marulanda and Jacobo Arenas, whom I only knew from photographs. Still remains in my memories the succession of fantastic landscapes that appeared before our eyes.

During the two weeks I spent in that camp surrounded by fog, and located under a huge rock that protected us from the permanent rain, I was called by Timo twice to his improvised office. He wanted to have as much information as possible about the activity of the Front from which I came, the 19th, and based on that, to make decisions that involved my future.

In the second interview he suddenly told me that he had agreed to send me to Magdalena Medio. Surprised, I replied that surely they would kill me there very quickly. I knew of many Front transferees who were dying soon in the new destination, and the Magdalena Medio seemed to me at that time a territory similar to the Vietnam War.

His reaction was calm. He explained that it was not like that, despite what the news said. The people in the guerrilla were dying, in the great majority of cases, for doing things they did not have to do. Each mission had a staff to fulfill it, the fatal error of many was to assume tasks they were not supposed to take on.

Henceforth I never forgot such advice, and I believe that thanks to him I can write this today. In 2010, during the harsh days of constant harassment in the area where El Mono Jojoy was moving, I was teaching a course in philosophy and political economy, in a unit that was suddenly bombed and machine-gunned by hunting jets and harpy helicopters.

When we tried to reach the top of a hill heavily hit by fire, came the order that two squads were left in the skirt, facing with their rifles the machines that attacked us. The shower of lead and bombs was real. I prepared to accompany the boys, when the memory of Timo’s words flashed in my memory.

I had been sent there to teach a course, the veteran fighters were them. I should not confuse my role. I continued with the rest of the squad to the edge where we entrench ourselves to resist, protecting ourselves with the thick roots and trunks of the trees. In the end we left that place, with the balance of several dead and injured. There were broken helicopters and even a dead pilot.

The important thing was that it was possible to abort the enemy landing, which only took place at night in other surrounding hills. The guerrilla, as surely as any human work, is the product of a collective effort, of a cooperation of talents, which often does not seem so obvious, which is why one or the other take the merit.

I think that the great ability of Timo, is to recognize who is who, and to whom each task corresponds at a given time. From then on, he knows how to combine the skills of one and the other very well, in a team effort that ends up producing the expected results.

He never attributes anything to himself, his clarity and modesty prevent him from doing so. He has no personal ambitions.

He just had a heart operation at the Shaio clinic in Bogotá. I have been very close to him in each of the incidents of his health in recent years.

Three years ago, when he suffered a coronary heart attack in Havana, in the middle of an important meeting of the Central Staff of the FARC.

And about eight months ago, when it was affected by transient cerebral ischemia in Villavicencio.

I have seen him emerge from each of them with renewed strength and surprising serenity. This time will be no exception.

In addition, the surgery they performed was not due to an immediate crisis, but to a medical recommendation that aimed to prevent this from happening. His health and optimism were intact when he entered the operating room and when he got out of it.

He invited all his supporters and friends to vote for the Party of the Rose on March 11.

He thanked the medical and assistance staff for everything they did for him.

That is Timo, always clear of what corresponds to do in each moment.

The correctness of his wise guidelines shines even more with time.

We are waiting for him to be back soon.