IRELAND: Why is Theresa May protecting the DUP’s dirty little (Brexit) secret?

Theresa May’s Northern Ireland Secretary James Brokenshire is going to try to sneak a big favour to the DUP, the small party now propping up May’s government in parliament 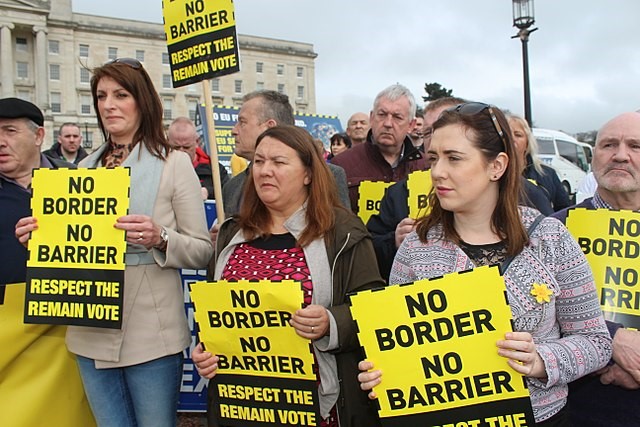 This will go to a full vote of the House of Commons, 7 March 2018. A Labour source tells us the government tried “all kinds of tricks” in the Commons last night to hurry it through and stop it coming to such a show-down. In the Lords last week, the minister said the government was open to considering honouring the original commitment to transparency from 2014 onwards. But an official in the department undermined him and said we shouldn’t read too much into his statement.

Today, Theresa May’s Northern Ireland Secretary James Brokenshire is going to try to sneak a big favour to the DUP, the small party now propping up May’s government in parliament – and in effect holding the future of Britain, Ireland and Europe hostage.

Hoping that journalists and MPs will be too hung-over after yet another Christmas party to pay much attention to a new legislative detail, Brokenshire has chosen the quiet moment before the break to smuggle through a measure which will deny British citizens the right to know who funds their politics. And in particular, it will block all of us from knowing who gave the DUP a highly controversial £435,000 donation to campaign for Brexit last year.

Of course, that’s not what Brokenshire says he’s doing. Listen to his speeches, and you’d believe that his parliamentary order – which comes before a specially convened committee of 17 MPs today – is designed to deliver long-awaited transparency on political donations to the people of Northern Ireland.

In a sense, it will. Unlike in the rest of the UK, donors can give any amount of money to political parties in Northern Ireland and still keep their names secret. Brokenshire’s move will change this.

But here’s the catch. The Northern Ireland Secretary wants to make the new transparency rules effective 1st July 2017 – when in fact, a law was passed three years ago which would have allowed donors to be publicly named from 1st January 2014.

This timing is crucial. If Brokenshire was granting transparency from 2014, it would mean revealing who gave the DUP the mystery £435,000 – the largest donation ever received by a Northern Irish party, which was spent on lavish pro-Brexit campaigning in the weeks before the tightly-fought EU referendum vote.

This matters to citizens across the UK because almost none of this secret donation was spent in Northern Ireland. In fact, much of the cash was used to fund expensive wrap around adverts in the Metro freesheet in major cities on the mainland.

In effect, the DUP laundered a huge sum of cash for someone who wanted to bankroll the Leave campaign across the UK, and abused an out of date Northern Irish loophole to keep their identity a secret. And now Theresa May’s government is cleaning up after them.

Everyone will deny, of course, that this has anything to do with the squalid £1bn deal the Conservatives made with the DUP in May this year (2017), in order to keep May’s government in power.

Asked in July why there weren’t granting transparency from 2014, the Northern Ireland office said to Channel 4  that James Brokenshire “does not believe that it is right or fair to impose retrospective regulations on people who donated in accordance with the rules set out in law at the time”.

But the reality is that the 2014 Act made clear that all donations from then on would one day be public. Talk to people in Northern Ireland, and they are clear: the assumption was always that one day, all details held by the Electoral Commission about donations from 2014 onward would one day be published. This is what the donors expected, it’s what the parties expected, and it’s what the public had demanded.

Brokenshire’s move also has involved ignoring all the people the government would normally consult on such an important decision.

There is one thing that the 2014 Act specifies. It says that the Secretary of State must “consult the Electoral Commission” before making donors details public.

The head of the Northern Irish Electoral Commission, Ann Watt, has made it unequivocally clear that she thinks information about donors from 2014 onwards should be published, saying: “While all reportable donations and loans received from 1 July 2017 will now be published by the commission, we would also like to see the necessary legislation put in place, as soon as possible, to allow us to publish details of donations and loans received since January 2014.”

Her predecessor Séamus Magee retired in 2014, and so is freer to say what he really thinks. At the time, he Tweeted : “The deal on party donations and loans must be part of the DUP/Conservative deal. No other explanation.”

“Every party in Northern Ireland understood that the publication of political donations over £7,500 was to be retrospective to Jan 2014.”

Similarly, the UK government claims it properly consulted all of Northern Ireland’s political parties on transparency, and that only the Alliance party specified that all information from 2014 onwards should be released.

This is a patently dishonest claim. For a start, the consultation took place in a context in which the parties all thought that the 2014 date was a given. You can read the Alliance Party response to the ‘consultation’ from the Northern Ireland office here.  It comes from their party leader, Naomi Long, who happens to have been the MP who successfully passed the piece of legislation allowing transparency from 2014. As she said: “the successful amendment ensured that all donations dating back to the commencement date of the legislation (January 2014) can be published once the exemption is lifted.” She doesn’t argue for transparency from 2014. She points out that it’s what the legislation she wrote already provides for.

Second, Brokenshire’s so-called ‘consultation’ with Northern Irish parties happened in January 2017, before the DUP’s controversial £435,000 donation was public, and before £1bn Tory-DUP deal to keep Theresa May in power. And in any case, all Northern Irish parties (apart from the DUP) have now clarified that they are happy with the 2014 date.

As our colleague James Cusick wrote in October:

“openDemocracy has learned that Sinn Fein, the SDLP, the Alliance Party, and the Greens have all told Brokenshire in writing or during talks that they want transparency on political donations backdated to 2014, thereby revealing the source of the DUP’s Brexit funding.”

“The Ulster Unionists have also told Brokenshire in private talks that they too do not oppose retrospective legislation and backed a consensus for the 2014 date.”

Finally, Northern Irish civil society has long been demanding transparency. After a string  of political  drenched in allegations of corruption, charities, NGOs, journalists and local campaign groups are desperate to know who’s been paying for their politicians’ campaigns. And yet there was no consultation with any of them before Brokenshire made his announcement.

As Niall Bakewell at Friends of the Earth Northern Ireland, who have long demanded donor transparency, said to openDemocracy: “James Brokenshire’s failure to consult anyone from civil society reveals a contempt for democracy. As a strident voice in favour of donor transparency for half a decade, Friends of the Earth had a right to be heard on this important issue, and yet we were completely ignored. The Secretary of State has distinguished himself as aloof and timid. It seems to us that he was either entirely ignorant of the history of the issue, or deliberately excluded voices that would challenge him to make a courageous and just decision on this issue.

“That his decision comes so soon after the confidence and supply deal was announced raises fair suspicion that it is impossible to maintain a Chinese wall protecting the Northern Ireland office from having to give consideration to awkward parliamentary arithmetic when delivering peace and normalisation for our society”.

There is a final, crushing irony in all of this – even beyond the fact that Theresa May’s government is being propped up, as it negotiates Brexit, by a party funded by secret Brexit donors.

It is this. Just last week, the DUP’s leadership made headlines across for Europe for blocking the Brexit negotiations from progressing. Why? Because they did not want Northern Ireland to be treated any differently from the rest of the UK.

In the same breath, they want to keep abusing a uniquely Northern Irish legal loophole to ensure the secrecy of the biggest donation they have ever received – cash which sought to influence the biggest democratic decision the British people have made for a generation.

In a bid to prevent our elected representatives from stopping this stitch up, the government has proposed this change to the rules in a way which means MPs can’t simply make an amendment, as they can with most other laws. But the special committee of 17 MPs looking at this proposal, which meets tomorrow, can kick up a fuss and attempt to force the government to reconsider. If Brexit was ever about Taking Back Control, they must.

(…is the Co-Editor of openDemocracyUK and also works with Bright Green. Before, he was a full time campaigner with People & Planet. You can follow him at @adamramsay.)

(…Mary Fitzgerald is Editor-in-Chief of openDemocracy. Before joining oD she worked for Avaaz, the global campaigning organisation, and is a former Senior Editor of Prospect Magazine. She has written for the Guardian, Observer, New Statesman and others. Follow her on Twitter: @maryftz.)

This article was published under a Creative Commons Attribution-NonCommercial 4.0 International licence.