This year we have seen sweeping, rolling statewide strikes by teachers that began in West Virginia and spread to Oklahoma, Kentucky, Tennessee, and Arizona, with stirrings in other states 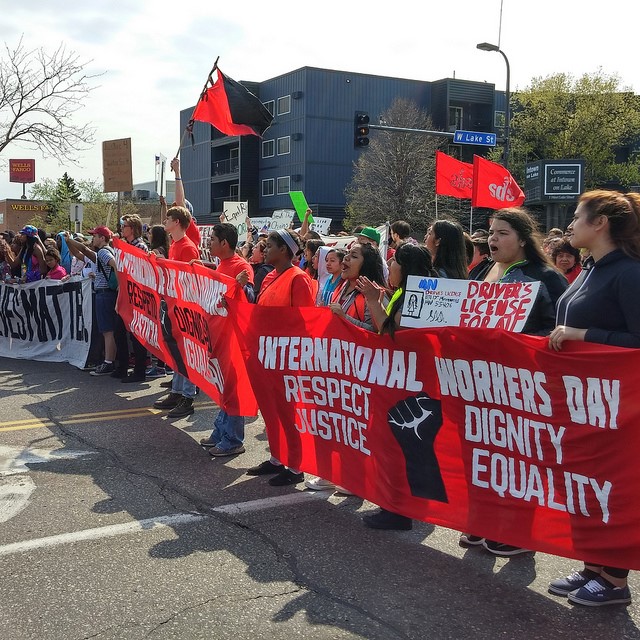 “The one consistent factor is the role of corporations in the financial, social and political insecurity that our people face. There is a plan to control and continue to redistribute more wealth to a shrinking corporate class by any means necessary, and to Hell with the consequences for families and communities.” People’s Tribune

A striking Oklahoma teacher called the mushrooming struggle around public education “a turning point.” She is right.

This year we have seen sweeping, rolling statewide strikes by teachers that began in West Virginia and spread to Oklahoma, Kentucky, Tennessee, and Arizona, with stirrings in other states (as we go to press a strike has begun by teachers in Colorado). At its simplest level, the strikes are about teacher salaries and benefits. However, as many pundits and experts are forced to acknowledge, it is about education and a system of funding which has brought everyone to examine the entire system and how it is connected to capitalism.

The entire concept of public education has been redesigned and corporatized through privatization, introducing voucher systems, charter schools and defunding at the local and state levels. These constant cuts affect not just salaries of teachers, but the conditions of classrooms and availability of materials, especially books.

The unity expressed in this fight is not just by teachers, but students, parents and the community over the demand for quality education

Since the strike by the Chicago teachers in 2012, and their plan to strike again in 2016, the fight over public education has been elevated to a new level.

Today that fight is surging at a time when people all over the country are struggling over issues ranging from pipelines that destroy the environment and communities, to immigration reform, to healthcare, to water, to police violence, to gun violence, and more. There have also been women’s marches, student marches, and thousands of local fights in every small town and city breaking out.

The one consistent factor is the role of corporations in the financial, social and political insecurity that our people face. There is a plan to control and continue to redistribute more wealth to a shrinking corporate class by any means necessary, and to Hell with the consequences for families and communities. The political spokespersons and representatives of the corporations at the local, county, state and federal level steer the economy and legislation to protect their interests and implement their plan. Since the corporations need less and less labor in an increasingly automated economy, they will not provide services like public education to workers they no longer need.

There is a growing resistance. This upsurge and tendency toward unity by various forces against the design of these corporations is an essential stage of the struggle toward building a movement with a plan of controlling the economy in the interests of the people. A step in the direction of a planned economy that serves the people is nationalization. In the case of education, properly funding education starts with nationalizing that funding—making it the federal government’s responsibility to properly fund a public education for every child. There is no shortage of anything. The illusion that we cannot “afford” to do what is right is a blatant distortion of the reality of the abundance of wealth and resources that exists today.

Indeed, it is a “turning point” that began some time ago. Education, like Medicare, Social Security, healthcare and the salaries of public employees with a pension system etc., are all increasingly on the table. This stage of the turning point requires a vision that recognizes it is possible to have a new world based on the needs of the people, not corporations.

May Day is when we celebrate the historical struggles of the working class and demonstrate our solidarity. This May Day it is urgent to recognize the contribution the teachers are making to the political education of our class—the working class—and our communities and to the struggle for a new world that is already playing out across the country and the world.

May Day rally for immigrant and workers’ rights