Backlash against Irish abortion rights enlists some of the same technologies, companies, and individuals involved in controversial Trump and Brexit campaigns 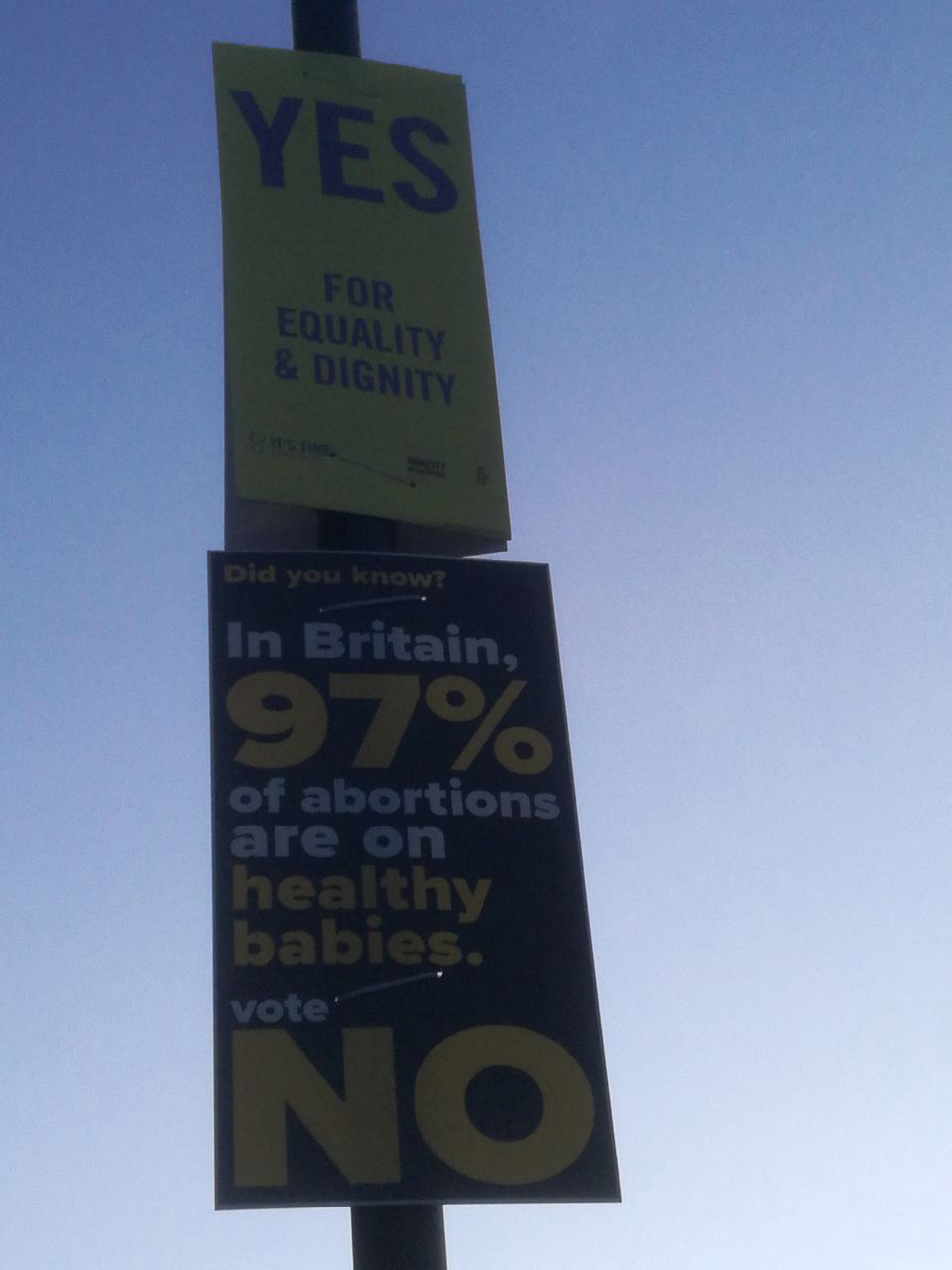 In 2012, billboards appeared around the Republic of Ireland depicting the image of a despairing woman, or a ruptured foetus, and the tagline: “Abortion tears her life apart.” Organisers from Dublin-based groups Youth Defence and the Life Institute claimed that the billboards were seen by more than 2.1 million people – almost half of Ireland’s population.

The Chicago-based director of the Pro-Life Action League stoked speculation as to who paid for the adverts when he told an Irish newspaper that US donors had given “hundreds of thousands of dollars” to Irish anti-abortion groups, including Youth Defence. “They need the money for publicity,” he said. “Abortion is about conversion.”

On May 25, Ireland will hold an historic referendum on abortion. The country’s laws are currently among the world’s most restrictive, denying women and girls access to terminations even in cases of rape or incest. The upcoming vote is attracting worldwide attention.

Transatlantic links between anti-choice groups remain strong and US activists are framing Ireland’s referendum as a major symbolic fight. Social media is emerging as a key battleground, with foreign and Irish anti-abortion and ‘alt-right’ activists targeting voters with Facebook ads.

Irish anti-choice groups have also enlisted some of the same American and British companies and individuals that used controversial data-mining and targeting techniques to campaign for Donald Trump and Brexit – including senior Vote Leave figures and a company that built Trump’s America First app and previously worked for the US National Rifle Association.

Data analytics tools used by such firms amount to “manipulation rather than persuasion,” global data protection expert Paul-Olivier Dehaye told openDemocracy 50.50. “Voters have no idea of the precision of the targeting that goes into this. The tools themselves are opaque.”

Dehaye added that there are “many reasons” to suspect that the groups deploying such tools are breaking both data protection and campaigning financing laws.

Irish senator Alice Mary Higgins called for an immediate freeze on unregulated online political ads ahead of the referendum. “Facebook continue to accept new payments for new unregulated political ads targeted at the people of Ireland. Such sales should be immediately stopped,” she said in a statement citing transparency and accountability concerns.

Save the 8th is one of the most prominent anti-abortion campaigns in Ireland’s referendum debate. Its name refers to an Irish constitutional amendment that enshrines the right to life of “the unborn.” This amendment must be repealed before Ireland can legislate for abortion.

The campaign is an officially-registered third party in the referendum. Records show that its online domain name is owned by the Life Institute, which (along with Youth Defence) was behind the grisly 2012 ad campaign. Youth Defence also has links to Ireland’s far-right National Party.

Save the 8th has also enlisted Kanto, a London-based political consultancy company, to canvass supporters, build an online presence, and use data analytics tools in a digital campaign to keep abortion illegal in Ireland.

It’s unclear what Save the 8th is paying Kanto for its services, or what specifically the company is doing for it. According to director Thomas Borwick’s Twitter bio, Kanto runs campaigns that “out-organise, out-plan, out-leaflet, out-twitter, out-work and out-vote all of its opponents.”

Son of a former Conservative MP for Kensington, 30-year old Borwick was also centrally involved in data analytics and social media campaigning for Brexit – including as Chief Technology Officer for the Vote Leave campaign.

Borwick is also connected to the founder of Vote Leave, former Conservative and UK Independence Party (UKIP) MP Douglas Carswell, through the company Disruptive Analytica of which both men are directors.

Disruptive Analytica uses “data to micro-target those that clients need to reach”. Borwick, his online bio boasts, “really understands data,” and is an “an expert in giving online communication campaigns the empirical approach they need to succeed.”

Borwick is also a former consultant at Cambridge Analytica – the company financed by Trump-supporting billionaire Robert Mercer, and “put together” by Trump’s former chief strategist Steve Bannon, who once served as Cambridge Analytica’s vice president.

Cambridge Analytica has made international headlines amid allegations from whistleblower and former contractor Christopher Wylie that the company illicitly harvested 50 million Facebook profiles used to target voters in the 2016 US elections.

In an interview with the Observer newspaper, Vote Leave volunteer Shahmir Sanni claimed that the Brexit campaign also manipulated electoral spending rules in its use of data analytics. He claimed that evidence of this was destroyed.

Borwick is also director of a company called Voter Consultancy: one of more than 30 organisations that the UK Information Commissioner’s Office is currently investigating as part of a probe into the use of data analytics during Brexit campaigns. The company hit headlines last year when it emerged that the firm was behind Facebook ads targeting anti-Brexit Tory MPs.

There are currently no restrictions under Irish law to prevent foreign or undeclared interests from injecting themselves into the referendum debate on social media. Transparency campaigners have called for urgent reform to “outdated” rules.

According to a database published by the Transparent Referendum Initiative (TRI), Irish and international groups have taken out hundreds of Facebook ads targeting voters ahead of the referendum. Twelve of these were placed by the Save the 8th campaign.

Others were placed by American and Canadian groups, including the US Radiance Foundation; it previously appropriated Black Lives Matter language to shame African-American women.

Another advertiser is Rachel’s Vineyard, a Christian ‘abortion aftercare’ charity set to headline London’s ‘March for Life’ on 5 May.

“There is nothing to stop foreign actors spending any amount of money on social media to influence how Irish people vote in the upcoming referendum,” warned Craig Dwyer at TRI.

There is some evidence of similar online activism on other social media platforms – though the scale of this activity is unclear. “We’ve been sent screenshots of ads that people are also being targeted with on Instagram and YouTube,” Dwyer told openDemocracy 50.50.

Ireland’s Pro Life Campaign also hired a digital company, uCampaign, which previously worked with the Trump and Vote Leave campaigns. Past clients include an Australian anti-marriage equality organisation and the US National Rifle Association (NRA).

Dehaye, the data protection specialist, explained that the work of different data analytics companies can be used in tandem to target people with online political advertising.

“uCampaign provides the technical tool that helps collect more data about the electorate. This data is then aligned with voter lists and existing modelling, by outfits such as Kanto. This is then used to target online ads,” he told openDemocracy 50.50.

As part of its work for Vote Leave, uCampaign built an app which encouraged users to “Go all in for Vote Leave” and send a blanket message to their entire contacts books explaining why they planned to vote for Brexit.

In a 2016 post on Medium, Peters explained how the company created “a self-contained network for activists… to connect, mingle and take action.” He added: “Brexit gave us a taste of victory. Little did we know it was only the appetizer for what was to come later.”

At the time, some tech bloggers were underwhelmed by the America First app’s interface. But aesthetic pleasure wasn’t the purpose. It was, in Peters’ words, “pinpointed targeted matching” – harnessing users’ contact lists and cross-referencing them with other data.

uCampaign have now created a similar app for the Pro Life Campaign called the LoveBoth Project. It awards users points for taking different actions. Checking your voter registration through a link on the app unlocks 55 points; adding a LoveBoth twibbon to social media profiles is worth 125; signing up to go canvassing gets you 300 points.

TRI’s dataset shows that the LoveBoth Project has also bought at least 22 Facebook ads targeting Irish users ahead of the referendum.

The possibility of Twitter bots being deployed in the Irish referendum debate has also been raised, including by Irish journalist Philip Boucher Hayes. In October 2017, he said that his new followers on the social media platform had grown rapidly from roughly 100 to 1,500 per week.

Like “pro-Brexit fake Russian sponsored accounts,” most had not tweeted before and had 8 digits following their names. Hayes asked: “Why is someone creating fake Irish accounts on an industrial scale? Why is Twitter unable or unwilling to deal with it?”

Irish transparency campaigner Gavin Sheridan told openDemocracy 50.50 that despite recent policy changes at Twitter, which limit the ability of users to perform coordinated actions across multiple accounts, the role of bots in the referendum campaign is still a concern.

“These changes are welcome and make it more difficult for groups of people [on Twitter] acting in concert,” Sheridan said. He sees more activity, especially from the anti-abortion side on Facebook. “I expect to see more in the coming weeks,” he added.

But, he said: “Twitter bots are still a concern, given the number of new accounts found to be following prominent Irish Yes campaigners in recent months. We don’t yet know just how effective Twitter’s policy changes will be, or if users have found new workarounds to the changes.”

The business of political campaigning is changing internationally as voters are increasingly identifiable online and targeted with new digital tools.

Unfurling stories about online micro-targeting and data-mining are reverberating across Ireland amid the referendum campaigns. It’s clear that much of this debate will be fought online, with growing concern over the ability of powerful groups to influence public opinion, and votes, through unregulated digital campaigns and social media advertising.

Irish electoral law needs to “reflect modern campaigning,” and financial spending, as well as donations, must be better regulated, said Dwyer at TRI. Current legislation, “is outdated, fails to address modern society and advances in technology,” he warned. “We need reform.”

Isobel Thompson is the Digital Editor in Vanity Fair’s London office, and also a writer for VF.com’s vertical, The Hive.

This article was originally published in openDemocracy’s 50.50 Gender and social justice

Published under a Creative Commons Attribution-NonCommercial 4.0 International licence. If you have any queries about republishing, please contact info@opendemocracy.net