Turkey and its jihadist allies entered the Kurdish city on March 18, 2018, after 58 days bombing the region’s civilian population with the latest in NATO technology 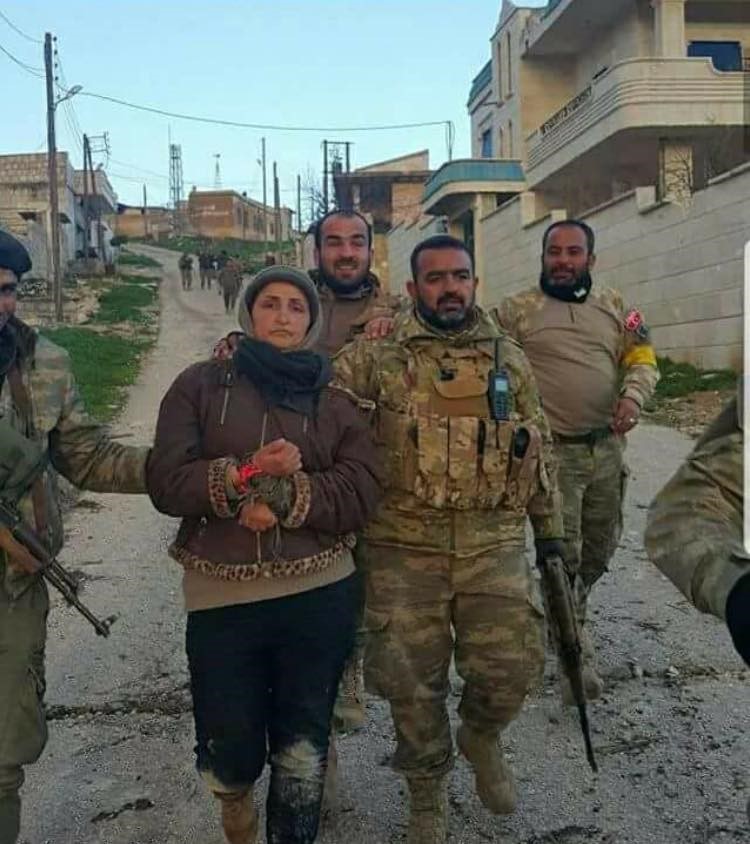 “Afrin was one of the earliest settlements in civilization, and also the centre of the agricultural revolution in the Fertile Crescent. Women played a leading role in this  historical process, which has been described as the first women’s revolution.” (Kongreya Star Committee for External Relations)

Little or no good news from Afrin (“Turkish forces to stay in Afrin”, says Turkish President, Recep Tayyip Erdoğan) now that the Turkish Occupation Forces have consolidated their hold over the Kurdish region… other than the usual propaganda (“terrorists neutralized – humanitarian aid delivered”) from the usual suspects…

Turkey and its jihadist allies entered the Kurdish city on March 18, 2018, after 58 days bombing the region’s civilian population with the latest in NATO technology: “The military attacks are enabled by western military technologies and equipment, especially German, British, and Italian weapons, which are being used against civilians. This makes western governments responsible and complicit in war crimes.” Kongra Star.

At that time we had reports of the so-called (Turkish) Free Syrian Army (TFSA) beginning to loot (“…the town itself, which was predominantly Kurdish, was looted after Turkish Forces moved in.”) as well as stories beginning to emerge of the abduction and rape of local women –  despite promises from NATO’s major ally that once the Turkish flag flew over the city any issues such as looting would be addressed.

Instead of concerns such as looting, ethnic cleansing, abduction, rape and torture being addressed, we have press reports from Andalou (the Turkish “state-run news agency”,) of aid convoys arriving, residents speaking out to celebrate their liberation from Kurdish (PKK/PYD) “terrorists”, videos of soldiers handing out chocolate bars (where have we seen that before?), etc., etc….

…if only… knowing well as Samuel Johnson said in 1758: “Among the calamities of war may be justly numbered the diminution of the love of truth, by the falsehoods which interest dictates and credulity encourages.” (The Idler)

Now, almost 2 months later, reports of the ongoing campaign of terror by Turkey’s Islamist allies (supported, apparently by the regular Turkish military) – both in Afrin city and its villages, once again accompanied with dismay at the total silence from the international community – struggle to make their way out of the besieged region with the hope that international governments and agencies will offer some support.

In recent days both Firat News (ANF) and the Hawar News Agency (ANHA) have voiced outrage at the ongoing attacks on women (including girls as young as 15) by Turkish soldiers as well as the mercenaries of the occupying Free Syrian Army that should be a grave cause for concern to Turkey’s NATO allies (“…is this your way of conducting war, #NATO #WeAreNATO”?) and other international human rights bodies concerned with war crimes (a prime example of a war crime, of course, is rape) and other human rights violations.

“The Turkish state and their gangs have raped, abducted or murdered at least 28 women from Afrin in the last month. Despite these practices, the invaders are attempting to use the name of Islam in the city. They aim to implement ISIS ideology, and the Turkish soldiers are now forcing the women in Afrin to cover up and wear long dresses.” (ANF News)

The Kurdish News Agencies continue to collect details from residents in the occupied areas of a number of outrages committed against local women:

A source from the Selûrê village in Jindirese stated that a village woman who refused to comply with the orders of the Turkish soldiers and the FSA mercenaries was raped and tortured.

Turkish soldiers and the militias also abducted a 21-year-old woman named Xedîce Riyad from the Shiye district. Xedîce was pregnant, and lost her baby due to the torture she was subjected to.

“Xedîce is still held prisoner by the gangs.”

In the Korka village of Mabata, the unidentified and tortured body of a 30 year old woman was also discovered.

In Mabatas’ Şîtka village, Turkish soldiers and the FSA raped two women and abducted 13 others.

There are reports of another 3 girls being abducted by the FSA from a another village of Mabata.

“The fate of the abducted women and girls is unknown as of now.”

In the Tel-Sallor village in Janders district sources told the Kurdish journalists that a woman was raped in the village by the Turkish occupation army and its mercenaries who had used “various methods of violence” because she refused to cooperate with them. “In addition, the Turkish occupation and its mercenaries told the villagers that they would take the woman to prostitute her all over Janders area.”

Zouzan Bashir Suleiman was abducted at the Trenada checkpoint leading to Afrin on Friday, 20 April, while returning with her family to Afrin. “According to the girl’s family, there were two mercenaries and two Turkish soldiers at the checkpoint…the two Turkish soldiers shouted at the members of the checkpoint and demanded that Zouzan be arrested as “terrorist” and forcibly taken to an unknown destination.”

Amina Ali was kidnapped from Medina district in the Rajo area…

“Women’s rights are often violated in most wars and battles, where they are used as a tool to implement the targets. This is happening now in Afrin, where the Turkish occupation army violates the rights of women in the Afrin canton… The Turkish occupation army and its mercenaries practice various forms and methods that are immoral and violate the rights of women in Afrin, where they are abducted, assaulted, killed and raped.

The Turkish occupation army and its mercenaries also require women to wear veils and black robes, as did the Islamic State’s gangs (IS) in territories it occupied in Syria and Iraq.” (ANHA News)

Even before the capture of Afrin the Kurdish Women’s Federation Kongreya Star had issued a statement (through its Committee for External Relations):

“The international public has not taken any adequate action, and every day we face new war crimes and civilian casualties. Women have become the targets of rape, cruel sexual assault, and mutilation of their bodies by Turkish army and affiliated gangs.”

Other sources since the occupation of Afrin on March 18, corroborate a lot of these statements:

“Civilians from Afrin who mostly inhabited the Şehba region now give information that shows the dimensions of this cruelty. The information we took from Kongreya Star representatives, which is the organizational structure of women in Rojava, is terrifying. According to Kongreya Star, hundreds of women are missing. As a matter of fact, they specify that 150 women were taken from Afrin and brought to the occupied territory of Azaz.” Information Center of Afrin Resistance

An End to the Silence?

A number of Kurdish groups are now attempting to prepare statistics documenting the crimes perpetrated against women as well as the other human rights abuses ongoing in the region by Turkey and its occupation allies.

Fatima Lkto, the coordinator of Kongra Star, the confederation of women’s movements throughout the region of Rojava, told the  Hawar News Agency (ANHA):

“Women went through a bad psychological state during the aerial and heavy artillery bombardments and even now after the occupation forces have entered Afrin, these wretched women are without any global action from the humanitarian and women’s organizations who have done nothing. ”

She also confirmed that they are compiling records of the crimes committed against women and children in Afrin by the Turkish occupation army and its mercenaries, and that the work is ongoing to develop cooperation with the different women’s organizations to stop what is happening against the women of Afrin.

In its  briefing document released in February [THE ATTACKS ON AFRIN TARGET WOMEN’S LIBERATION AND DEMOCRATIC ALTERNATIVES] the women’s organisation put the attacks on Kurdish and other minority women by the Turkish occupation forces into perspective:

“The Erdoğan regime has openly announced that the aim of its military aggression against Afrin is the annihilation of the democratic autonomous self-administration of Rojava and the occupation of the territory of Northern Syria. Along with racist, religious-fundamentalist, and sexist oppression, Turkey strives to wipe out all traces of women’s history and the female-centred and egalitarian culture in our region.

Afrin was one of the earliest settlements in civilization, and also the centre of the agricultural revolution in the Fertile Crescent. Women played a leading role in this  historical process, which has been described as the first women’s revolution. Symbols of mother-goddesses like Ishtar or Astarte are a common piece of cultural heritage among the local peoples and can be found in many sites of Afrin. For example, the huge footprints in the flagstones of the 3 thousand-year-old temple of Ain Dara, situated close to Afrin city, symbolise the presence and the spirit of the goddess Ishtar.

By bombing and destroying this ancient temple site, the Turkish state strives to enforce its patriarchal and fascist order.”

Is there no end to the silence?

Along with reports of other groups – such as the Yezidis, facing the might of what is now, apparently, a newly resurgent neo-Ottoman Islamist Turkey (the Yezidis are commonly denounced as infidels by Islamic fundamentalists who, having suffered under ISIS/Daesh, are now facing forced conversion to Islam and persecution in Afrin) – as well as the deterioration of the overall situation in Syria following Israel’s recent bombing campaign – to say nothing of  Turkey’s threats to move farther into the Democratic Federation of Northern Syria (Rojava)…

– there is little hope for the people in this once relatively trouble-free region (who for years offered a place of refuge to many internally displaced people from the Syrian civil war)… to find peace and safety.

Which its why it behoves the international community, as well as Turkey’s NATO allies, to actively engage with the situation in Rojava and hold Turkey and its ISIS-like allies to account.

“We have one sentence to address to the international agencies: feminicide is the deeper reality, or foundation for this genocide, even the heart of it. When this is the reality, it should be to your shame that the rape of women is not recognized as feminicide by either the EU or UN…” Information Centre of Afrin Resistance

In April the Kongra Star organisation of Rojava called for positive measures to address the plight of the Kurdish people and the other minorities facing the Turkish military machine:

– The UN, international institutions and Human Rights organisations have to fulfil their responsibility to ensure the security and human needs of the people of Afrin!

– All those responsible and the perpetrators of crimes against humanity against the people of Afrin such as occupation, rape, murder, looting, and feminicide have to be convicted for their crimes by an international court!

Is it any wonder that the Kurdish people, despite the sacrifices they made in the bitter  and bloody war against ISIS/Daesh, continue to express amazement and protest at the silence of the international community with all their talk of democracy and human rights while both exporting weapons as well as holding hands with those with an obvious contempt for the right of people to live in  peace and safety?

“Activists in Afrin confirmed the authenticity of published photos showing an armed group of Turkey-affiliated factions taking a cuffed civilian woman in the area of ‘Mubatli’ on charges of being a fighter of the women’s protection units (YPJ) and filming her later with a military jacket, they clearly forced her to wear over her civilian clothes to look like a fighter. ”

“After the Turkish invasion, this is the new law in #Afrin Sharia law implemented by jihadi gangs. #SiAmoAfrin… ”