‘The Death of Stalin’ Film Review 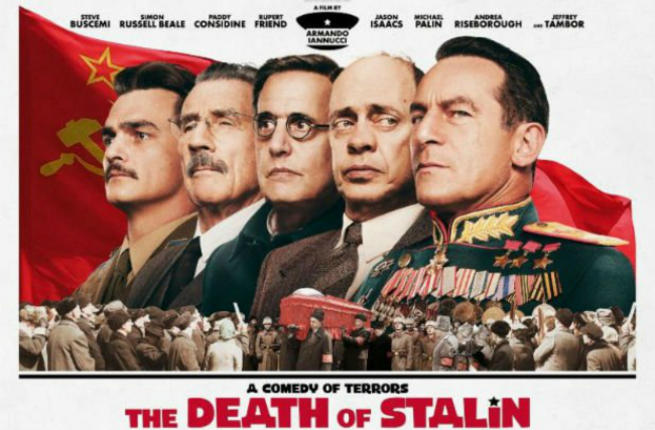 Rotten Tomatoes gives director Armando Iannucci’s recently released comedy The Death of Stalin a 96 percent viewer rating. An informal poll of friends and colleagues who saw the film had them laughing their heads off. I suppose if you have to lose your head, this is about the best of all possible ways to do so.

I was curious and couldn’t restrain myself. I plunked down my amerikanski rubles and went along for the ride.

Historians speak of “The Great Terror” under Soviet dictator Joseph Stalin, an era that began in the late 1920s when he consolidated his power after the death of Lenin and started accusing his enemies of being either Trotskyites, parasites, foreign agents, or “enemies of the people,” and lasted all the way to the end, when on March 5, 1953, he suffered a brain hemorrhage and died in his dacha outside Moscow.

In his last year or so, the paranoia grew especially acute: On August 12, 1952, he had murdered a dozen or so loyal, harmless Soviet Yiddish poets and former members of the Jewish Anti-Fascist Committee. And just before he died, he had been convinced that Jewish doctors were plotting to kill him. If he had not succumbed so suddenly, they would surely have lost their lives very soon. (The film posits that so many doctors were already killed or dispatched to gulags that it was hard to find any competent ones left who could treat the great leader.)

Accounts differ as to just how many—millions?—of his political enemies Stalin ordered killed. More than that if you include miscalculations in planning which led to widespread famine. Even more if you count the controversial Soviet responses to growing fascism in Western Europe which allowed German might to gather sufficient force for a Blitzkrieg into an unprepared USSR in June 1941.

“The death of one man is a tragedy,” Stalin is often (mis-)quoted as saying; “The death of millions is a statistic.” In this filmic treatment, one man’s death has become broad, almost slapstick, Three Stooges-like horseplay as the crude, potty-mouthed bumbling members of the Presidium, Stalin’s inner circle, scramble for position and power. Perhaps Marx was right when he wrote that history repeats itself, the first time as tragedy and the second time as farce.

This is an old esthetic debate, of course. Are there subjects so dire, so serious, so sacrosanct, that humor is verboten? And who decides that? After all, quoting Comrade Stalin again, “Gaiety is the most outstanding feature of the Soviet Union.” Hundreds of innocent people taken to Lubyanka prison to be tortured and shot by orders of his secret police chief Lavrenti Beria? Sure, a regular laugh riot! Let’s have a drink!

It somehow came as no shock to see in the final credits that the source for The Death of Stalin was the eponymous comic book by Thierry Robin and Fabien Nury, the latter of whom is credited with the screenplay.

Iannucci has assembled a crack ensemble for his story. There are a fair number of incidental characters, notably Olga Kurylenko as the beautiful, accomplished classical pianist and Stalin’s favorite Maria Veniaminova Yudina (1899-1970), Andrea Riseborough as Stalin’s daughter Svetlana, and Rupert Friend as his son Vasily.

In the wake of Stalin’s death, the whiff of reform and change is in the air, but no one knows quite how to proceed without subjecting himself to being placed on the death list in case of a false move. Certain leaders wish to proceed with the executions so as to fulfill the late leader’s wishes, while others are ready to begin drawing the “comedy of terrors” to a close.

In the habit of anti-factional “democratic centralism,” which in practice meant following Stalin’s orders now and without question, the leadership is not used to open discussion free of fear of losing one’s life. There is genuine humor—because we have all seen this in real life—as proposals are voted on favorably, then voted down because someone with more authority challenges it. The new Soviet man (and the leadership are all men) has become a timid, tentative, shaking coward.

All of this is handled as material for joking. But in one aspect of the film Iannucci holds back his judgment and scorn, and that is when he portrays the masses of Soviet citizens pouring into Moscow in deep sorrow over the death of the 74-year-old leader—for many the only helmsman of state they have ever known. Earlier in the film, Khrushchev in particular is made to look ridiculous as, like any fatuous old warrior, he amusingly recounts his experiences at Stalingrad during World War II, the over five-months-long battle that forced the Nazis into retreat in 1943, exactly one decade before.

These masses, however, remember the war as no laughing matter at all: For them, suffering losses estimated at 25 million or more, Stalin was the man of the hour who preserved the nation and defeated fascism. And Khrushchev was a part of that victory. More than that, Stalin and his Presidium oversaw the rebuilding after the war and re-established the decimated land as a great power on the world stage.

But Iannucci despoils this moment by having the army fire on the unruly crowds and killing 1,500. By now no viewer will be thinking of the film as a documentary, but this confirms that the director is making instead a “mock-umentary”—not just a faux documentary but truly a gratuitously mocking anti-documentary. There were indeed some deaths as the crowds gathered to view Stalin’s body, but not from bullets, rather from pushing, crushing multitudes of bodies. The poet Yevgeni Yevtushenko recalls that terrible time, as Soviet people trembled with fear about what a future without Stalin might bring.

Some thinkers on the left believe the Soviets won the war because of Stalin, while others, recognizing his many flaws, would say the Soviets won despite Stalin. Either way, it was not Stalin alone, of course, but the collective leadership and the masses of Soviet citizens. In the post-war period, too, Iannucci can poke all the fun he wants at Malenkov, Khrushchev, et al, no doubt a good deal of it well deserved; yet it was again that leadership that commandeered the rebuilding. By 1953, the farms were producing again, the factories churning out industrial and consumer goods, the schools, universities, and cultural life functioning anew. Plus, they were helping the other socialist countries get back on their feet.

The Death of Stalin was filmed in London, Kiev, and Moscow, and is basically a British production. Maybe the Brits are not so conscious of this, but what was happening in the U.S. at the same time? The Rosenbergs were executed on trumped-up testimony in 1953, a few months after Stalin’s death, and the McCarthyites were running amok through not only Hollywood but labor, education, faith communities, and everywhere. Lives were ruined. Our foreign policy was “containment” of Communism, which translated on the ground to overthrowing democratic governments in places such as Iran and Guatemala, not to mention our enduring race problem, inhuman treatment of Native American citizens, and cranking up the arms race at every turn. From a stateside point of view, we had our own version of Cold War terror here at home, with little justification for gloating.

Now about the rebuilding—after the initial Revolution in 1917 and the end of World War I and again after World War II. Critics speak derisively about “Stalin-era architecture” and I want to speak up for it—not esthetically necessarily, although I would only point out that such big clunky buildings were not so atypical in a lot of Western countries as well; and as for housing projects, well, the needs were vast and rapidly expanding as the Soviet Union urbanized and industrialized to an ever greater degree. The luxury did not exist for much other than the impersonal and yes, often shoddy construction that sprang up around city cores and did house millions of people. Click here for a series of links about Soviet and socialist architecture. By no means was it all bad.

Just about an hour before Stalin died on the night of March 5, 1953, in one of those communal apartment buildings, another prominent Soviet citizen died of a stroke at the age of 61, the world-famous composer Sergei Prokofiev. His symphonies, concertos, chamber works, cantatas, ballets, and operas continue to be admired and performed both in his home country and in concert halls all over the world. In the words of Norman Lebrecht,

“At Prokofiev’s funeral there were no flowers: Stalin’s men had rounded up all winter blooms. There were few mourners, barely 40, because all attention was directed to the national loss.

“Three days passed before news of Prokofiev’s death leaked to the West, three days more before it appeared in Pravda; still, some got wind of it. The string quartet who played beside Stalin’s open coffin wept openly—for Prokofiev.”

It would have been an ironic touch for the filmmakers to use some of his music in the soundtrack, but I did not see any composers named other than Mozart, Tchaikovsky, and Chopin. Prokofiev had his own nasty brushes with Stalin’s rule, so for his memory’s sake perhaps it was just as well not to bring him into this film in any way.

Viewers will have to decide for themselves if domestic political terror is suitable material to be treated as a laughing matter. Some will appreciate the sacrilegious disrespect for all government and authority as a valid comedic theme. Others will find the dismissal of any possible good coming out of this group of compromised men itself flagrantly disrespectful to history and a ham-fisted, nihilistic swat in the nose toward the prospects for any socialist project. The Trotskyists among us called the USSR a “deformed workers’ state,” meaning that though it needed a revolution within the revolution, nevertheless it had to be defended against the much worse capitalist nations.

If you do see The Death of Stalin, remember: Mock-umentary.

The trailer can be viewed here.

The Death of Stalin

Eric A. Gordon is the author of a biography of radical American composer Marc Blitzstein, co-author of composer Earl Robinson’s autobiography, and the translator (from Portuguese) of a memoir by Brazilian author Hadasa Cytrynowicz. He holds a doctorate in history from Tulane University.