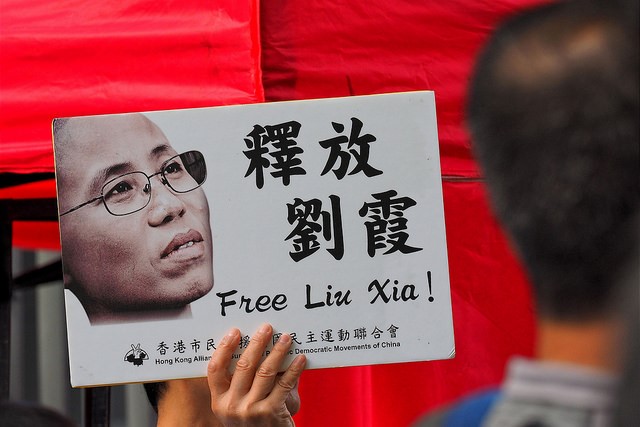 Concern has been expressed in recent weeks at the health and well being of Chinese poet Liu Xia who has been held under house arrest by the Chinese authorities since her human rights activist husband Liu Xiaobo won the Nobel Peace prize in October 2010 “for his long and non-violent struggle for fundamental human rights in China”.

While trying to walk the thin line between not annoying the Chinese authorities in their enormous task of ruling the almost 1.5 billion mass of Chinese workers while at the same time supporting her husband’s calls for democracy on the Chinese mainland, Liu Xia has unfortunately not experienced much democracy nor freedom from the regime.

Recent promises after her husband’s death in July 2017 to allow her to travel following intervention by a variety of international sources, including the German foreign minister, appear now to have been reneged on and the few reports that are sourced from Liu Xia’s isolated residence in Beijing speak of a serious deterioration in her mental health. Calls on President Xi Jinping to release the poet from house arrest are ongoing.

“Liu Xia had a seven-minute telephone call on 8 April 2018 with Liao Yiwu, an exiled Chinese writer based in Germany, during which she stated that she was prepared to die if the Chinese government did not allow her to leave China. Crying throughout the conversation, Liu Xia said: “Now, I have nothing to be afraid of. If I can’t leave, I’ll die in my home. Xiaobo is gone, and there’s nothing for me now. It’s easier to die than live. Using death to defy could not be any simpler for me.” Amnesty writes

These have been hard years for her. A heart attack, the death of her husband (following many years spent occupying a prison cell) just last year, the death of her parents and the many years violently isolated from outside contact with either visitors, a telephone or the internet.

Hopes that following Liu Xiaobo’s death on the 13 July 2017 the Chinese Party would relent and allow her to practice her craft as writer and artist freely appear now to be fading: “Chinese authorities have repeatedly promised Liu Xia that she would be able to leave China and seek treatment for her clinical depression. State security officers apparently first told Liu Xia to wait for the conclusion of the Communist Party’s 19th Party Congress in October 2017. Then, once that had passed, the officers told her to wait until after the annual sessions of the National People’s Congress (NPC) and Chinese People’s Political Consultative Conference (CPPCC), which concluded in March 2018.”  Amnesty interview

What purpose can it serve for this revolutionary monolith from the last century, the Chinese Communist Party, to hound and harass an individual citizen who courageously stood by her outspoken husband – irrespective of her allegiances or views or those of her dead husbands?

“Only heroes can quell tigers and leopards

Punishing the families of ‘dissidents’ is not the policy of the heroes of old nor of the brave, I would suggest? “Small wonder flies freeze and perish.”

So, to all the Comrades of this enormous Party, in this wonderful and ancient country now striding heroically into the 21st century, humbly and most respectfully, give us a break:  Please Release Poet Liu Xia.

…and while we are waiting here is one of Liu Xia’s poems posted by PEN International:

The death from twenty years ago has come back again

Come and gone as the time

There is no response and none

The wound from twenty years ago has been bleeding

Fresh and red as the life

You are fond of many things but more passionate accompanying

the souls of the dead

You have made a promise to seek the truth with them

On the way there is no light and none

The gunfire of twenty years ago has decided your life

with her you spent

poems after her death

In the verses there is no sound and none

Bodies currently campaigning for compassion to be shown to Liu Xia are below.

You can take action.

Write to the Chinese officials…

Write to or visit your local Embassy and request that Liu Xia be allowed the (limited yet important) freedoms that hundreds of years of struggle here in the West achieved on behalf of workers and the other dispossessed in our societies.

“We are calling on the Chinese authorities to lift all remaining restrictions placed upon Liu Xia immediately and unconditionally, and to allow her to leave the country, should she so wish.”   English PEN

“We also appeal to your conscience and your sense of compassion. Liu Xia has undergone great suffering for many years, simply for being the wife of a man that China has deemed to be a dissident. She has committed no crime, and she has not been charged with any crime. She is in poor health, she is isolated from those who care for her, and she is grieving deeply for the loss of her husband. She should be free to meet freely with family, friends, and members of the international community, free to travel where she wishes, and free to be reunited with the outside world.” PEN America

On the 1st day of the New Year 2018, ten thousand Hongkongers held a rally against political suppression and China’s joint rail checkpoint plan.

By, Etan Liam via https://www.flickr.com/photos/etanliam/

Liu Xia Reads Her Own Poetry Under House Arrest (December 2013)

“NO ENEMIES, an animation based on an extract from the statement, “I Have No Enemies” was written by Liu Xiaobo and intended to be read at his trial on 23 December 2009. On 25 December 2009 Liu Xiaobo was sentenced to 11 years in prison for “inciting subversion of state power,” and in October 2010, at the announcement that Liu Xiaobo was that year’s Nobel Peace Prize laureate, his wife Liu Xia was placed under house arrest. The words in the video and below are an extract from this essay.”

Liu Xiaobo – Nobel Lecture: “I Have No Enemies: My Final Statement”

“If I may be permitted to say so, the most fortunate experience of these past twenty years has been the selfless love I have received from my wife, Liu Xia. She could not be present as an observer in court today, but I still want to say to you, my dear, that I firmly believe your love for me will remain the same as it has always been. Throughout all these years that I have lived without freedom, our love was full of bitterness imposed by outside circumstances, but as I savor its aftertaste, it remains boundless. I am serving my sentence in a tangible prison, while you wait in the intangible prison of the heart. Your love is the sunlight that leaps over high walls and penetrates the iron bars of my prison window, stroking every inch of my skin, warming every cell of my body, allowing me to always keep peace, openness, and brightness in my heart, and filling every minute of my time in prison with meaning. My love for you, on the other hand, is so full of remorse and regret that it at times makes me stagger under its weight. I am an insensate stone in the wilderness, whipped by fierce wind and torrential rain, so cold that no one dares touch me. But my love is solid and sharp, capable of piercing through any obstacle. Even if I were crushed into powder, I would still use my ashes to embrace you.