Prison officials summoned Ramin Hossein Panahi on 19 May informing him that his execution will be carried out after 15 June, when the Muslim month of Ramadan ends 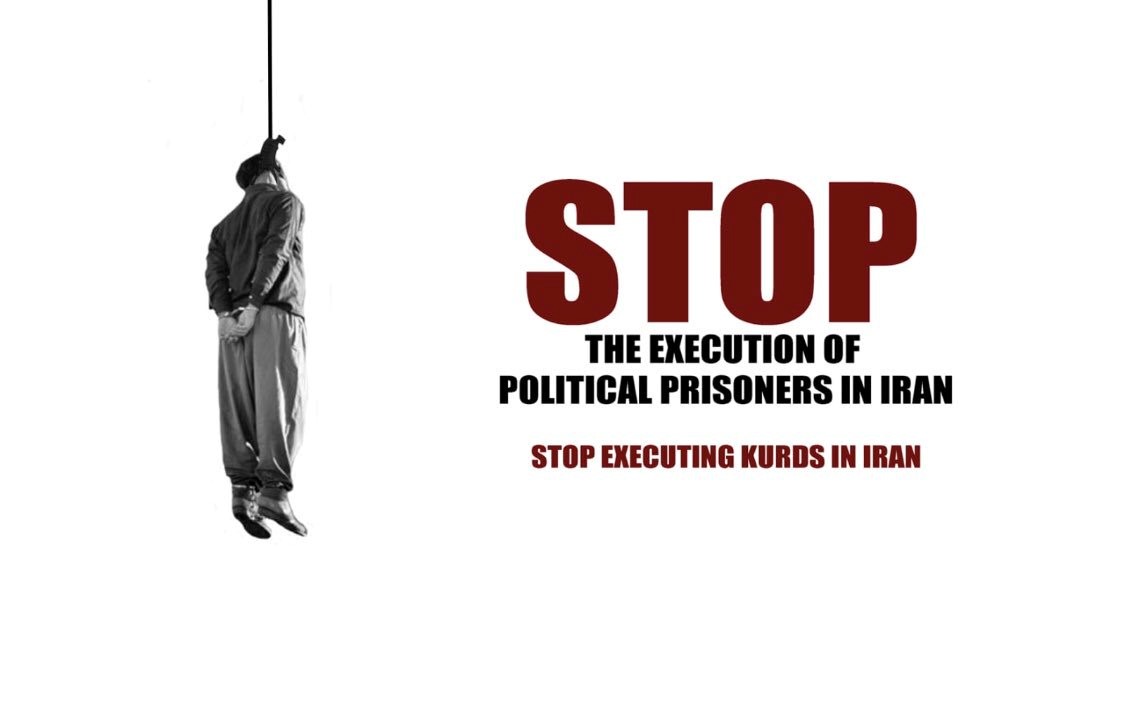 With the ending of Ramadan, the ninth month in the Muslim Calendar, expected Friday 15th June, the family of Ramin Hossein Panahi, a Kurdish activist, waits… following the earlier stay in his execution until the ending of the fast.

“Prison officials summoned Ramin Hossein Panahi on 19 May informing him that his execution will be carried out after 15 June, when the Muslim month of Ramadan ends.” (Iran Human Rights Monitor)

Recent days have seen an upsurge in the campaign by Panahi’s family and international human rights organizations (as well as social media users) to stop the execution…while the world continues waits.

Ramin Hossein Panahi, now 23 years old, was arrested on June 2017 in Sanandaj, the capital of Kurdistan Province in Iran and charged with being a member of the Kurdish opposition party Komala. Panahi was allegedly carrying a gun and a hand grenade at the time of his arrest. This was bluntly rejected by Panahi’s lawyer, Hossein Ahmadi Niaz:

“My client was never armed. When he and his companions entered into the country, they were being watched by the IRGC forces who later shot and arrested them. According to the statement by the Kurdistan Judiciary, Ramin’s relatives immediately lost their life and Ramin, seated in the back of the vehicle (Pride), was immediately wounded and became unconscious. Nobody can engage in an armed conflict while unconscious! Per the official statement of the IRGC and its news, none of the IRGC officials were injured in this incident, which shows that the IRGC agents had been prepared for an armed conflict. Secondly, Ramin neither held a gun nor shot anybody. He was not involved in the armed dispute.”

The Kurdistan Human Rights Network released these and other details of his arrest and torture (here).

“Ramin Hossein Panahi, a 22-year-old man from Iran’s Kurdish minority, was convicted and sentenced to death after a grossly unfair trial on 16 January that lasted less than an hour. His family told Amnesty International that he appeared before the Revolutionary Court in Sanandaj with torture marks on his body, but that the court failed to order an investigation into his claims that he had been forced to “confess” to the crime. According to his lawyer, the court convicted and sentenced him to death for “taking up arms against the state” (baqi) merely based on his membership of the banned Kurdish opposition group Komala. No specific evidence was provided linking him to activities involving intentional killing, which is the required threshold defining the “most serious crimes” to which the use of the death penalty must be restricted under international law. Between his arrest and trial, he was allowed one brief meeting with his lawyer, which took place with intelligence officials present. The Supreme Court upheld the conviction and death sentence in March 2018.”

The Islamic Republic does not tolerate opposition (nor “plotting to overthrow the Islamic regime; political dissidence; sabotage; arson; rebellion; apostasy” etc. etc.) and Ramin received the death penalty in January 2018. Since then, he has been imprisoned in the northwestern Iranian city of Sanandaj awaiting execution.

Concern at both the torture and trial of Panahi was expressed by the  U.N. Special Rapporteur on extrajudicial, summary or arbitrary executions, who said her office was concerned about allegations that Panahi had not received a fair trial and was mistreated and tortured in detention. “The Iranian authorities must immediately halt the execution of Mr. Panahi and annul the death sentence against him… I have been in dialogue with the Iranian authorities regarding Mr. Panahi’s situation.” said Agnes Callamard.

The Kurdistan Human Rights Network (KHRN) says that Panahi was held in solidarity confinement for several months. His health has deteriorated in prison and he is suffering from kidney failure and amnesia. He has also been denied medical treatment since being arrested and tortured.

Times are bad in Iranian Kurdistan.

And all the worse if you happen to be an Iranian Kurd with a passion for your own identity.

The Association for Human Rights in Kurdistan is quoted as saying (in 2017):

“…since January 2017, more than 269 Kurdish citizens have been detained and in the last seventeen months, two hundred and twelve (212) Kurdish civilians became victims of extra-judicial shootings by the Iranian security forces.”

Since the death sentence was passed an ongoing campaign to save the life of Ramin Hossein Panahi has been ongoing. Most recently in May, following the temporary stay of execution, lawyer Hossein Ahmadiniaz said Iran’s Supreme Court has rejected an appeal to spare the life of his client.

“’His case received a lot of media attention,’ the brother explained, saying that campaigns in Iran, Kurdistan, and Europe possibly contributed to the temporary stay of execution.”

Now with the ending of Ramadan here and as the hours pass…forty lawyers and activists have written an open letter to Ayatollah Ali Khamenei, Iran’s supreme leader, asking him to stop the execution of the Kurdish prisoner.

‘”According to Article 278 of the Islamic penal code, the supreme leader has the right to act with forgiveness in such cases … so the citizens of Kurdistan will ask you to deal with the case of Ramin Hossein Panahi with mercy,” these lawyers and activists requested.”’

His family have also suffered since his arrest. Following the suicide of Panahi’s niece following harassment by Iran’s Intelligence service and the Iranian Revolutionary Guards, Amjad Hossein Panahi, Ramin’s brother, told the Centre for Human Rights in Iran:

“Our whole family is on the verge of suicide…We don’t dare leave our mother alone. One of our sisters is always with her to make sure she doesn’t hurt herself…

Right now, my brother Ramin is in prison on death row, my other brother Afshin has been sentenced to eight years in prison and is sitting in jail and our son-in-law Ahmad Aminpanah is in prison serving a five-year term.

On top of these terrible circumstances, the security agencies are continuing to harass us and making things worse…”

“I urge you who are busy negotiating with Iranian officials these days, to add one demand to your other demands and that is revocation of the death penalty for Ramin Hossein Panahi and examination of his case in a qualified European Court.

By this letter, I want to connect you even if for a moment to the life and spirit of a mother who is no longer able to tolerate this catastrophe. These days, my heart is connected to the heart of my beloved son. I know how difficult these moments are for my youngest child, Ramin, as he is having the nightmare of being executed.

I want you to get close to my feelings even if only for a moment, put yourself in my place and do something to stop this catastrophe. You are able to do this, and I sincerely urge you to do this. I want you to officially and seriously ask them to stop Ramin’s execution.”

We also, with a commitment to fundamental human rights:

…before it is too late.

The hours are passing.

ERBIL, Kurdistan Region – Kurdish prisoner Ramin Hossein Panahi was injured in a fight in the Sanandaj jail where he is being held, awaiting execution.

The brawl broke out when a group of prisoners tried to prevent guards from taking Panahi out of the prison. His execution was scheduled to take place after Ramadan, which ended Friday.

About 20 prisoners were injured, the Ramin Hossein Panahi Campaign announced on Telegram on Saturday.

Panahi’s brother, Amjad, confirmed to Rudaw that the fight had occurred and his brother was injured. He asked civil activists to continue their efforts to save his brother’s life.

Panahi, 22, was arrested in June 2017 in Sanandaj and charged with being a member of the Kurdish opposition party Komala. Prosecutors said Panahi had received military training and was carrying a gun and a grenade at the time of his arrest.

His lawyer denied that Panahi had been armed and said his client was simply visiting family at the time of his arrest.

Membership in an opposition party is not an offence that warrants the death penalty, his lawyer has said.

The case has attracted international attention with UN human rights officialsand Amnesty International both advocating for the Kurdish man.

ERBIL (Kurdistan 24) – Protesters from Iranian Kurdistan (Rojhilat) and the Kurdistan Region gathered on Tuesday in front of the United Nations (UN) office in Erbil, asking the international community to use its influence to stop the execution of a condemned Kurdish prisoner in Iran.

Some held up photographs of Ramin Hossein Panahi, the Kurdish prisoner who has been jailed in Iran for months and has been reported to have spent a large percentage of his detention in solitary confinement.

Panahi was sentenced to death in January by an Iranian court in Sanandaj (Sina) for “taking up arms against the state.” His conviction was based on claims that he is a member of the armed Kurdish opposition group Komala, but no evidence was presented that would link him to crimes he was charged with, which included murder.

“We demand the cancellation of the death sentence for Ramin Hossein Panahi who, unfortunately, has been sentenced unjustly by a so-called court in Iran,” a demonstrator said, reading a prepared statement to reporters in front of the UN compound.

The protestors urged the international organization to increase efforts to pressure Tehran into overturning the verdict, warning that the sentence could be implemented at any time and on any date and claiming that all necessary preparations had been made to carry out the execution.

In late April, a UN statement read, “Executing Mr. Panahi, following his torture, and unfair trial and on the basis of charges that do not meet international standards for the use of death penalty, would be unconscionable. We urge the Government of Iran to annul the death sentence.”

The sentence came after ‘a grossly unfair trial and amid serious torture allegations,’ said Philip Luther, Amnesty International’s Research and Advocacy Director for the Middle East and North Africa.

“Ramin Hossein Panahi’s case has been a breathtaking miscarriage of justice from start to finish. After appearing at his trial reportedly bearing torture marks on his body he was convicted in less than an hour,” Luther added.

He continued, “During the investigation period, he was denied access to both his lawyer and his family, as well as to any details of the evidence against him. In a complete mockery of the judicial process, intelligence officials also repeatedly pressured him to make a televised ‘confession’ in exchange for the quashing of his death sentence.”

“His refusal to submit to this pressure has seen him languishing in solitary confinement.”

In recent years, Iran has proven to be one of the leading nations in carrying out the death penalty against its citizens. Of the 993 people executed globally in 2017, 507 of them were in Iran, according to Amnesty.

“We urge the Iranian authorities not to compound this shocking catalogue of human rights violations by proceeding with what is the ultimate and irreversible denial of human rights,” Luther previously stated.

“Ramin Hossein Panahi’s death sentence must be quashed now before it’s too late.”