«We invite the voters of Turkey to choose HDP’s pro-labor, environmentalist, anti-crisis, fruitful and fair program instead of the AKP’s pro-crisis, unfair, anti-labor and anti-environmentalist politics” 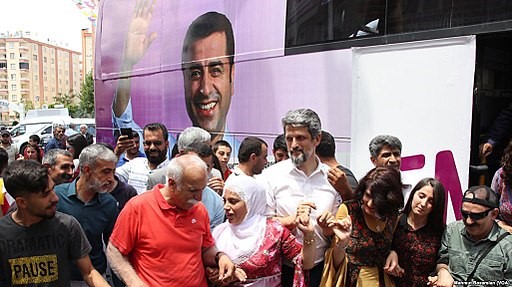 “Politics means making choices. We the HDP, have made our choices in favor of the poor, labor, peace, women and nature. We invite the voters of Turkey to choose HDP’s pro-labor, environmentalist, anti-crisis, fruitful and fair program instead of the AKP’s pro-crisis, unfair, anti-labor and anti-environmentalist politics.”

This article is by the current Peoples’ Democratic Party (HDP) co-chairs Pervin Buldan and Sezai Temelli.

Pervin Buldan, Co-Chair of the Peoples’ Democratic Party (HDP), was elected as an independent candidate to the Parliament as Iğdır’s first female MP in 2007, and in 2011 she was elected an HDP MP for Istanbul in the general elections of June 7, 2015, and in November 2015. Until becoming Co-Chair in February 2018, Buldan served as HDP’s first Parliament Deputy Chair. She moved to Istanbul from Hakkari shortly after marrying Savaş Buldan. Her spouse was kidnapped by unknown persons on June 2, 1994 and was murdered on June 4, 1994.

Sezai Temelli is Co-Chair of the Peoples’ Democratic Party (HDP). One of the founders of the HDP, Temelli was elected as an Istanbul MP in the June 7 elections. Until his election as HDP Co-Chair in February, 2018, he served as Vice President for Economic and Social Policies.

Turkey is preparing for an election of historic importance to be held on June 24, 2018. The AKP during 16 years in power have created a rent-seeking economy through the exploitation of labor and nature only to benefit its own supporters. It was the shopping malls, chain markets and contractors supporting the government that benefited and thrived, not the workers, civil servants, retirees, farmers, tradespersons. As the foreign debt continued to grow, the AKP government continuously wasted economic resources in luxury, in more construction, in arms and war.

The AKP that came to power following the economic crisis of 2002 was forced to call the elections in a panic after dragging the country into a severe economic crisis in the last days of its 16 years in power. Different social strata in society have begun to feel the economic consequences of the government’s security policies and growing oppression, and ambitions for regime change in favor of one-man rule, especially after 2014. As the HDP, we see the deepening of the crisis of democracy in recent years as the principle cause of the current economic crisis.

The AKP-MHP coalition aims to rule the country under the law of a state of emergency and a regime under one-man rule. In recent years the AKP has shattered the social peace. The Parliament has been turned into an endorser/notary of the Palace. The judiciary has been turned into an instrument of the Palace. The media have become a propaganda outlet for the regime and academic freedoms were curtailed under the threat of state issued decrees. AKP policies have put on hold the country’s claim to be a democratic society and the deepening of the crisis of democracy has triggered a deep economic crisis. The economic indicators during the state of emergency sufficiently reveal the scale of the economic crisis. Turkey is confronted by high currency rates, high interest rates, high inflation, high unemployment and growing debt.

*Highest rates as of June

A turn for the better with the economic policies of HDP

An environment of reliability and trust is the foundation-stone for overcoming the economic crisis. The HDP will end the state of emergency and remove the policies that curtail rights and freedoms. We will facilitate the institutions and practices of democracy. We will restore democratic institutions and encourage the practice of democratic principles. We will ensure the independence of the judiciary. We will overcome the crisis in democracy which is the precondition for overcoming the economic crisis.

The aim of our reliable, peaceful and participatory economic program is to ensure that people can participate in the decision-making processes and to strengthen the influence of the workers over relations of production that are compatible with and responsive to our social needs and the ecology. We will increase the income of most vulnerable groups in society by bringing a halt to a corruption economy that has been only benefiting the supporters of the AKP government. We will fund our economic policy by equitable tax policies and avoiding waste and corruption in public expenditures. In this way, we will ensure fair distribution by increasing the income of 60 million citizens.

We will provide jobs and employment guaranteeing human dignity under the Labour Rights Program. We will support the investment and employment by the KOBI (Small and Medium Sized Enterprises) Supporting Program instead of rent-seeking capital. We will reduce the cost of the productive farmers and raise the value of their production through the Farmer and Agriculture Support Program. We will protect small business owners through the Craftsman Support Program against unfair competition.

We will implement the Social Rights Program for 10 million households which are below the poverty line, that is under 6.000 TL annual income. We will provide sufficient and free public service for all citizens. Retirees currently have to work due to insufficient income. The number of working retirees will reduce thanks to raising the retirement pension. Young people will take their place in schools and in general employment. We will open kindergartens in all quarters allowing women to participate in social life and employment.

5 million citizens’ consumer credit and credit card debts have been rising day by day. 5 million citizens cannot cover their debt installments. The bank debts interest, up to 50.000 TL will be deleted for workers, small business owners, civil servants, retirees, the unemployed and the people who live under the poverty line. Principal repayment will be re-constructed as long-term and zero-interest. Enforcements for debt will be frozen. The debts of citizens will be ended by the Free Distribution Program that will ensure citizens a rising income and a debtless life.

Fair taxation will be the focal point for the HDP’s Economic Program instead of borrowing. We will create sufficient financial resources for the Fair Distribution Program through fair taxation, implementing democracy in budgeting and preventing the waste of the public budget. We will effect reform for the institutions and income tax system. We will develop a taxation system that is sensitive to where wealth resides and focused on reducing urban profiteering. Budget rights will be democratically implemented. We will end the AKP’s waste economy. We will create new financial sources for investment, employment and public services in this manner.

Politics means making choices. We the HDP, have made our choices in favor of the poor, labor, peace, women and nature. We invite the voters of Turkey to choose HDP’s pro-labor, environmentalist, anti-crisis, fruitful and fair program instead of the AKP’s pro-crisis, unfair, anti-labor and anti-environmentalist politics.

This media is in the public domain.