Turkish Presidential Candidate Demirtaş “We will continue to fight”

Selahattin Demirtaş, the party’s unsuccessful presidential candidate, released the following statement through his lawyers from his prison cell 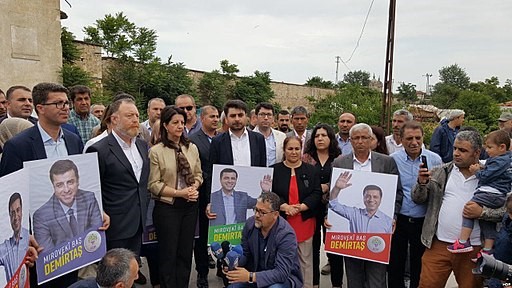 “While other candidates were able to hold 100 rallies, I was able to send 100 tweets.” Selahattin Demirtaş

Following the count of Sunday’s Turkish elections alongside substantial allegations of voter fraud carried out by the ruling AK Party and where the Peoples’ Democratic Party (HDP), took an estimated 11.67% of the vote, (passing the 10% threshold to enter parliament for its second consecutive term), Selahattin Demirtaş, the party’s unsuccessful presidential candidate, released the following statement through his lawyers from his prison cell in Edirne.

“First, I would like to say I hope the outcome of the elections will be for the good. I congratulate all my fellow citizens who went to the ballots to vote. I offer my gratitude to all friends who put forth an immense sacrifice in the election race without justice or equality.

I also would like to congratulate my party, the HDP, for overcoming the threshold despite the State of Emergency conditions, the oppression and the lack of balance in opportunity. I salute the will of the people who came together around the HDP. The HDP being in the Parliament under such conditions is a great success.

We will continue to fight the most resolute fight for the interests of the people, within and outside the Parliament, in all civilian areas. I congratulate all my candidate friends who were or were not elected for their labor, and wish them all great success.

I would like to thank the youth and the women in particular for the leading role they took in this campaign. We will continue our fight without a single step backwards, focused around our principles.

Me being forced to campaign under conditions of arrest was the greatest injustice in the elections. In this sense, in any case, the legitimacy of the outcome will rightfully be debated.

While other candidates were able to hold 100 rallies, I was able to send 100 tweets.

Despite this fact, I tried to do whatever I could for my people. I strived to fulfill the necessities of my role and my mission. I believe I was partly successful with the HDP entering the Parliament.

But I did have shortcomings too. For them, I submit myself to the forgiveness of my people. Whatever my position may be, I want everybody to know that I will never give up and always continue to fight.

We will all analyze the outcome the best we can, and take the necessary lessons. We will continue to do all we can to transform politics into an area for solutions under current circumstances.

I salute you all once again, send you my respects, and wish you success..”

Selahattin Demirtaş’s 2018 presidential campaign being launched outside Edirne Prison, where he is incarcerated