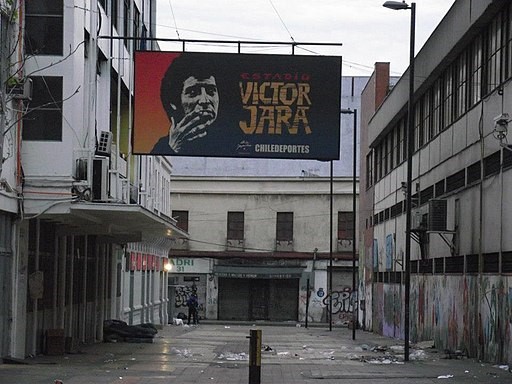 “In the afternoon the phone rang. Heart jumping, I ran to answer it. An unknown voice, very nervous, asked for Compañera Joan … ‘Yes, yes,’ then there was a message for me: ‘Compañera, you don’t know me, but I have a message for you from your husband. I’ve just been released from the Estadio Chile … Victor is there … he asked me to tell you that you should be calm and stay in the house with the children … that he left the car outside the Technical University in the car park, if maybe, someone can fetch it for you … he doesn’t think that he will be released from the stadium.’” Joan Jara, Victor: An Unfinished Song

After years of campaigning for justice for her husband (since the morning of 11 September 1973, when they parted), as well as for the many people tortured and murdered alongside him, 45 years ago, on the 16 September 1973 and in the following days, in Chile Stadium (Estadio Chile, renamed in 2004 as Estadio Víctor Jara )…

…and despite the main perpetrator of the brutal killing of the much loved singer, ex-Lt. Pedro Barrientos, still ‘miraculously’ avoiding extradition from Florida, USA to Chile to face trial for both torture and murder – (in June 2016, a US federal judge found the former Chilean soldier Pedro Pablo Barrientos Nunez, now a US citizen, liable for Jara’s murder, the singer’s widow and two children were awarded $28 million)….

…Joan Turner Jara must be pleased to know, finally, that another nine ex military officers of the Chilean Junta that overthrew the popular front government of President Salvador Allende have finally been sentenced for the crimes they committed almost 45 years ago.

Alongside the attempts to extradite the Russian-Roulette playing Lieutenant Barrientos for trial, this verdict comes after the conviction of retired colonel Mario Manriquez Bravo in 2009, chief of security at Chile Stadium during the coup. At that time Victor Jara’s family vigorously contested the closing of the case with this ruling by Judge Juan Eduardo Fuentes:

«This is incredible, I was not expecting this,» Joan Jara, Victor Jara’s widow, told local radio. «I am very concerned that a case so emblematic should be closed like this. What happens to the other cases from the Chile Stadium?»

Víctor Jara was arrested as part of Pinochet’s purge of government supporters in the United States/CIA backed coup against the Popular Unity Government of Salvador Allende; Jara – who was also a folk singer, teacher, poet, theatre director and communist party member – was taken prisoner in the early days of the coup in September 1973.  Having been long associated with the social justice movement and the left he was a  prime target for the right-wing military junta who would eventually be responsible for thousands of deaths as well the imprisonment of an estimated 130,000 more.

Victor Jara’s hands, they say, including his wrists and fingers, were first crushed and broken by the military torturers in Santiago’s Estadio Chile, during 3 days of brutality and torture while his torturers were taunting him to play his guitar…

Jara wrote his last poem, «Estadio Chile» in the few days left to him in the notorious Stadium and had it smuggled out:

There are five thousand of us here

in this small part of the city.

We are five thousand.

I wonder how many we are in all

in the cities and in the whole country?

and make the factories run.

Six of us were lost

as if into starry space.

One dead, another beaten as I could never have believed

a human being could be beaten.

The other four wanted to end their terror

one jumping into nothingness,

another beating his head against a wall,

but all with the fixed stare of death.

What horror the face of fascism creates!

They carry out their plans with knife-like precision.

Nothing matters to them.

To them, blood equals medals,

slaughter is an act of heroism.

Oh God, is this the world that you created,

for this your seven days of wonder and work?

Within these four walls only a number exists

which does not progress,

which slowly will wish more and more for death.

But suddenly my conscience awakes

and I see that this tide has no heartbeat,

only the pulse of machines

and the military showing their midwives’ faces

Let Mexico, Cuba and the world

cry out against this atrocity!

We are ten thousand hands

which can produce nothing.

How many of us in the whole country?

The blood of our President, our compañero,

will strike with more strength than bombs and machine guns!

So will our fist strike again!

How hard it is to sing

when I must sing of horror.

Horror which I am living,

horror which I am dying.

To see myself among so much

and so many moments of infinity

in which silence and screams

are the end of my song.

What I see, I have never seen

What I have felt and what I feel

Will give birth to the moment

Following these deaths in the Stadium it is estimated that anywhere between 3,000 and 10,000 victims were tortured, killed, or forcibly disappeared under Pinochet’s witch-hunt against opponents as part of the US-backed Operation Condor aimed at wiping out so-called “insurgents” and stabilising dictatorships in South America.

Democracy began to be restored in Chile in 1990 when Augusto Pinochet stepped down. He never stood trial. He died in 2006 and was never convicted for the crimes committed under his regime.

In August 1999, Victor Jara’s British-born widow Joan Turner Jara filed a lawsuit against her husband’s killers, who, after 26 years at that time, had still not been identified.

Victor Jara’s body was exhumed for an autopsy in 2009. Following the autopsy his body was finally laid to rest in Santiago 36 years after his torture and murder by the military government.

In 2013, the Chilean Supreme Court formally requested the extradition of the former Lieutenant Pedro Barrientos from the United States to Chile to stand trial for the 1973 torture and murder of Jara.

The US government has yet to respond to this extradition request.

On the 23 July 2015: the Guardian reported Chile’s arrest and charging – forty two years after the murder of the poet and musician – of ten of the alleged perpetrators.  Barrientos was not included, being in Florida and prosecutors not wishing the process to be delayed.

The fact that the U.S. Justice Department did not respond to a request by the Chilean government and pressure from the Jara family for his extradition is an outstanding issue reminding the world of the involvement of the Nixon-Kissinger administration in these crimes against humanity and their simultaneous involvement in Operation Condor (Operación Cóndor) responsible for an estimated 60,000 deaths of left wing activists and opponents of the right wing regimes in the region.

“It has been a long journey seeking justice for Victor’s death. His songs continue to be sung today, and inspire both artists and those who seek social justice… For Victor, art and social justice were one and the same. Today, there is some justice for Victor’s death, and for the thousands of families in Chile who have sought truth. I hope that the verdict today continues the healing.”

The last song that Victor Jara wrote before he was murdered was called Manifesto.

“He was quiet as he worked on it, introverted and withdrawn. I could hear him singing gently in the workshop as I worked in the house. Then he came to call me to ask me to listen to it. Although it was a very beautiful song, my heart contracted as he sang it to me. I knew that Victor was writing his testament.” Joan Jara

It’s words are worth remembering:

I don’t sing for love of singing

or to show off my voice

but for the statements

made by my honest guitar

for its heart is of the earth

blessing the brave and the dying

so my song has found a purpose

as Violeta Parra would say.

Yes, my guitar is a worker

shining and smelling of spring

my guitar is not for killers

greedy for money and power

but for the people who labour

so that the future may flower.

For a song takes on a meaning

when its own heart beat is strong

sung by a man who will die singing

I don’t care for adulation

or so that strangers may weep.

I sing for a far strip of country