Return to Kobane – Part One

Patrizia Fiocchetti has been in Kobane to open the Women’s Academy. Here is the first part of her feature about the journey 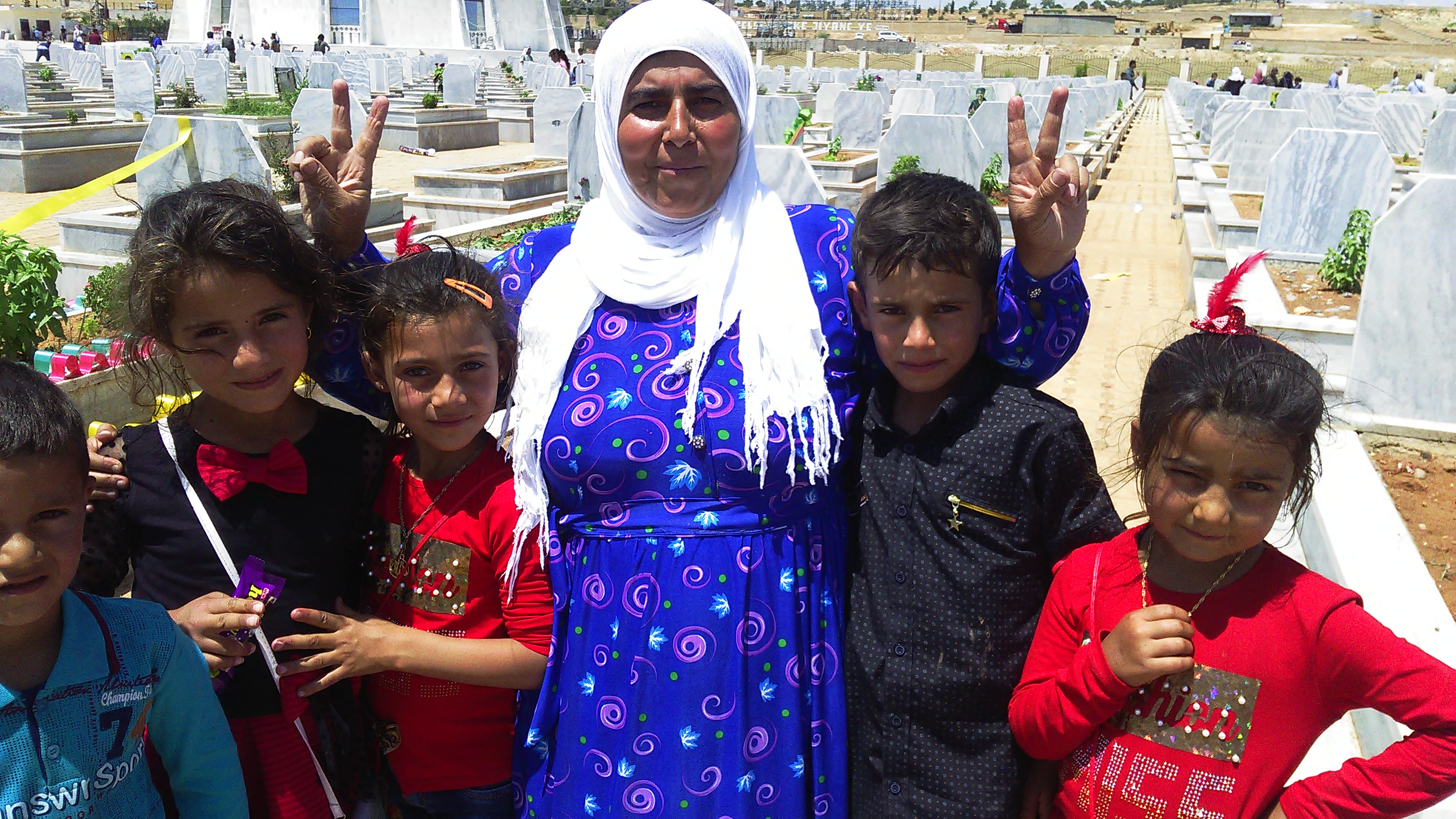 We have already abandoned the grey and anonymous slabs that mark the border between Turkey and Rojava.

The vehicle on which we travel has driven through provincial roads that wind through towns full of life.

It is the sunset that dampens the heavy impact of the mid-June heat. We are tired, hours of travel behind us and Kobane is still not in sight. We desire it, it appears to us like the phoenix that we chase but we cannot reach.

The eyes lost out of the window, bewildered, we watch life moving on the eve of Eid al Fitr, the second most important feast of Islam marking the end of the holy month of Ramadan, while the bus stops at yet another checkpoint of the People’s Protection Units (YPG).

«Here is Kobane”. The hoped-for announcement arrives unexpectedly. But what astonish us is the city itself. Reconstructed, illuminated, full of people.

No more rubble. No more silence. No more the absence. On the way to the guest house, we see the shutters of the shops raised with the owners sitting outside to catch the cool of the evening.

An old man is stretched out on a mattress lying on the sidewalk and the children around run after each other.

Inside the barber shops, an orderly row of men waiting to cut their beard and hair to prepare for the celebration.

Just over three years have passed since I visited Kobane, a month after being liberated from DAESH.

What I see now shatters the memories of that time: Kobane has risen in spite of the Turkish embargo, the indifference of the powerful, the subtle enmity of the Iraqi Kurds.

Eid al Fitr. The day of celebration can only start with paying homage to the fallen in the many battles that have occurred since the liberation of Kobane to today.

On the graves perfectly aligned of the military cemetery, a three-spiers monument watch over, the highest spier in the centre, majestic in its essential linearity.

“It represents the mountains» – explains Emin Sales co-president of the Foreign Commission accompanying our delegation in that visit. «For us Kurds, the mountains have a profound meaning».

We move, a part from each other, between the tombs, walking on the marble ground and reading the names, places of birth and death of the fallen. But above all the dates: most of them are very young, born in the mid-90s.

Fighters in uniform, families, especially women and many children, are wandering among the gravestones. Someone sits down on the ground: a mother surrounded by all female kinship except for a boy of five-six years, recites a prayer and wipes a few tears.

But the pain does not haunt like a shroud in that place that should actually collect it up and celebrate it, traditional and non traditional clothes, are brightly coloured under the reflection of the sun.

Little girls and children offer us trays full of sweets and chocolates: it’s the offer for the celebration. They smile and let themselves to be photographed.

Then a lady followed by a young woman approaches us, hands the phone to a friend and here go the photos. “My husband lies here, and also my son, her husband» and she points to the girl.

«These are all my nephews. It’s sad, but we live because they died to set us free.»

The martyrs’ cemetery is the place where the living collect the witness of rebirth.

And this rebirth is concrete, tangible. The palaces tower built with elegance and taste. Few floors, without weighing down the city skyline. Many construction sites are open to build schools not just homes.

«The reconstruction has been going on very quickly» says Roshan Abdi the co-mayor of Kobane in the meeting we have with her, co-mayor Fares Atti and some notables from the Euphrates region (composed of the canton of Kobane and Gire Spi).

«We could not stop or slow it down: the displaced people in Turkey quickly returned to the city and to nearby villages. Unfortunately, some problems remain and for those we receive the biggest complaints from citizens: the lack of the sewage system and the discharge of rainwater is the most urgent».

She looks at us, a sweet face and a sharp look. «When it rains, for example, water enters the homes on the ground floor causing damage».

The co-mayor adds: «The Assad regime has never invested in infrastructure in Rojava, including the sewage system. We were forced to rebuild it quickly carrying with us the heavy inheritance of 40 years of absence of the state. We have a project. However, we need the means to achieve it».

«The other issue concerns waste disposal. It is the resolution of these two issues that we have on the agenda. On this we ask for help and collaboration».

They look at us. They do not ask for false promises.

They came to meet us even in a period of closure of all activities (until Sunday 17 June) because it is urgent to give a concrete answer to the citizens who have put in their hands a mandate of strong responsibility where electoral chatter has never found space.

«Although there is no war in Kobane, we are still engaged in the ongoing conflict in Syria”, Roshan says.

«In addition to a city we are building a mentality and we need a specific training model for those working in the municipalities. We have to give solutions and if we do not succeed because we will not get support for projects with important budgets, we will take the matter before the People’s Assembly that is inside the General Assembly». Confederalism, that is, building from below.

While we take leave with the commitment to bring their requests back to Italy, I cannot help but note how the main role in the issues of the city and the Canton have passed into the hands of civilians.

Active citizenship, which makes the action objective and which make the meaning of its political work real.

Despite the long shadow of Turkey, impossible to ignore as we see weaving its red flag on a control tower visible beyond the wall along the border which ends with heavy and stubbornly closed door at Peace Square stops, life flows in the enthusiasm of a continually evolving and perfecting normality.

The remains of the war are visible in that portion of Kobane that the reconstruction committee decided to leave unaltered in memory of an epic resistance against a dark enemy.

We dive in what was the reality of Kobane in 2015 almost with a sense of deja vu, between the gutted buildings and the revolved cars.

The guide, a young corpulent fan of Francesco Totti who speaks a fast and very often difficult to understand English, accompanies us through the streets, clear of debris and by devices and corpses.

He tells us the epic of Kobane, shows us the signs along the defense positions carrying the names of YPG (People’s Defense Units) and YPJ (Women’s Defence Units) fighters who right there lost their lives.

The Open Air Museum was a project of the first hour, because memory has a political as well as historical value. YPG fighters wounded in the resistance are members of the responsible committee. We meet them in their headquarters in Azadi Square, Freedom Square where objects found in the rubble that belonged to civilians and fighters who lost their life are collected. Objects that one day will be relocated in the Open Air Museum.

«We are working» says one of the managers lying on a brown sofa. «We are still securing some buildings and we have to establish the visit route. Then there are the families that still live there. Some we transferred to newly built apartments. Others say they have all the memories there and do not want to leave.»

A dialogue carried out by the municipality is under way with these families. Without pressure and, above all without resorting to evictions.

Talks to understand the reasons of these families and, on the other hand, of the powerful sense of this initiative.

The tranquility in the negotiation is grasped while we are visiting the Open Air Museum. We meet a father with two little children, a girl and a boy. The guide greets him warmly, and tells us that he too took part in the defense of Kobane.

Handshakes and ritual photos. We go to the exit, a swarm of kids chase each other, laugh as we speak in Italian and English. They have plastic weapons and they play war.

Behind us we leave the profile of silos in Turkish territory. From there, on 25 June 2015 DAESH mercenaries disguised in YPG uniforms launched an attack which resulted in the massacre of many citizens, including many teachers.

look at the photo gallery