“#IRAN ARE YOU LISTENING?” Ongoing fears for life of Ramin Hossein Panahi

Arrested in June 2017, Ramin has been on death row since January of this year 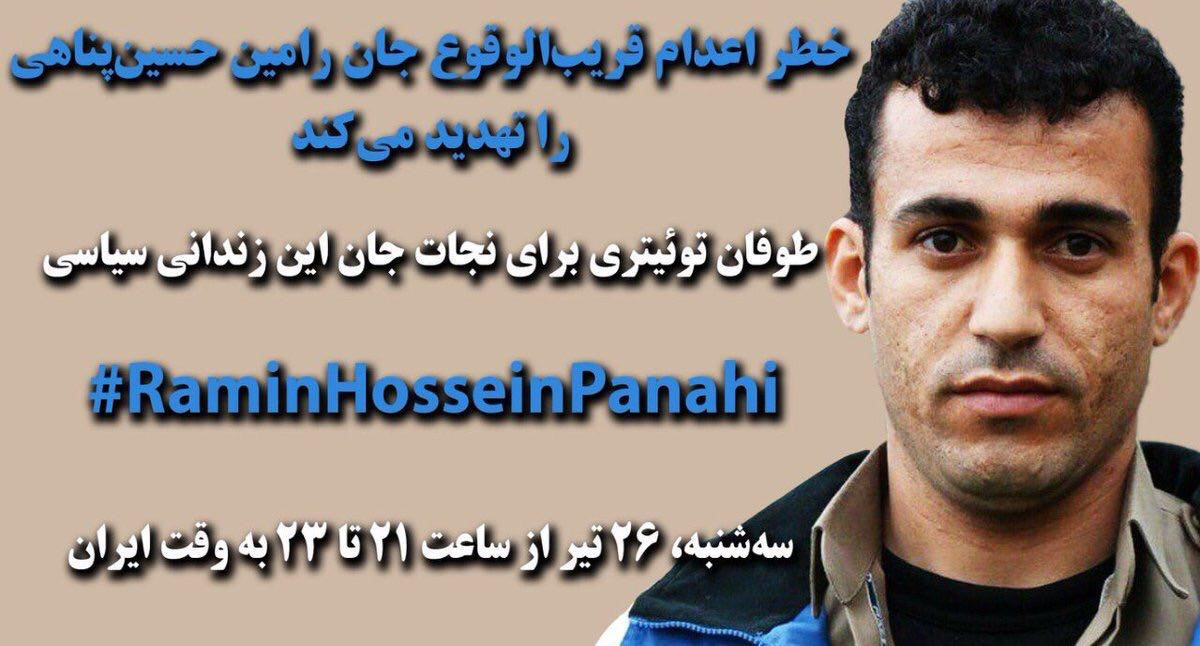 “In the dark times

Will there also be singing?

Yes, there will also be singing.

About the dark times.”

Serious concern has been expressed in recent days by the Center for Human Rights in Iran (CHRI) following reports in the Iranian media calling for the execution of Kurdish activist Ramin Hossein Panahi, sentenced to death in January 2018 for “taking up arms against the state”.

“It seems they are trying to prepare public opinion for his execution.” CHRI stated.

Arrested in June 2017, Ramin has been on death row since January of this year, with the uncertainty, arguably, a daily “inhuman or degrading treatment or punishment” (European Convention on Human Rights, Article 3) in itself, for both the Kurdish activist and his family, including his elderly parents.

Concern now is based on media leaks understood to be a response to militant activity in July by PJAK (Partiya Jiyana Azad a Kurdistanê‎ – Kurdish) recognised as having strong links to the Kurdistan Workers’ Party (PKK).

“At least 10 Iranian Revolutionary Guards were killed in early morning clashes in Mariwan, Kurdistan province on Saturday in an attack claimed by the Kurdistan Free Life Party (PJAK)…

‘Later we will release more details about this clash. The Iranian Revolutionary Guards suffered more casualties than Iranian officials announced. We suffered no casualties,’ Shaho added. ‘We will not launch more attacks if the IRGC do not attack our forces and members’ a PJAK spokesman, told Rudaw. ”

The Center for Human Rights in Iran (CHRI):

“The Islamic Republic usually tries to impose calm by carrying out executions, and for the past few weeks, some sites run by the IRGC and the Intelligence Ministry have been publishing articles every day in order to justify Ramin’s death sentence,” an anonymous source told CHRI.

The fate of Komala member Ramin Hossein Panahi has been hanging in the balance since the ending of Ramadan and while Iran has resumed its busy schedule of often public executions the Kurdish activist has so far survived.

He has also “…since his death sentence was upheld in April 2018… been moved back and forth between solitary confinement and the public ward of the Central Prison in Sanandaj, creating the impression that his execution was imminent.” ( Kurdistan 24)

How long this can be expected to continue is anyone’s guess. Relatives of Ramin are now concerned at this media response to PJAK’s attacks in Iran.

Meanwhile the international campaign involving the UN Human Rights office (OHCHR) and numerous other organisations continues to call for the annulment of Panahi’s death sentence and a reexamination of the, by now, blatantly unjust trial he was given in Iran’s revolutionary courts.

Back in May, Philip Luther, Amnesty International’s Research and Advocacy Director for the Middle East and North Africa, said:

“Ramin Hossein Panahi’s case has been a breathtaking miscarriage of justice from start to finish. After appearing at his trial reportedly bearing torture marks on his body he was convicted in less than an hour.

“During the investigation period he was denied access to both his lawyer and his family, as well as to any details of the evidence against him. In a complete mockery of the judicial process, intelligence officials also repeatedly pressured him to make a televised ‘confession’ in exchange for the quashing of his death sentence. His refusal to submit to this pressure has seen him languishing in solitary confinement.

“We urge the Iranian authorities not to compound this shocking catalogue of human rights violations by proceeding with what is the ultimate and irreversible denial of human rights. Ramin Hossein Panahi’s death sentence must be quashed now before it’s too late.”

That said, at the end of July just passed, Shima Silavi, Executive Director of the Ahwaz Human Rights Organisation, criticised the European Union for its failure to speak out against Iran’s flagrant abuse of Human Rights in her response to the EU’s recently published draft of the Annual Report on Human Rights and Democracy in the World and the European Union’s Policy on the Matter for 2017.

“Reading through the report, it becomes evident that EU has become less and less committed to its founding principles…

Being an Iranian human rights activist myself, I was quite surprised to learn that the name of the Islamic Republic of Iran was absent in the report and that not a single individual case was raised by the European Parliament. This negligence is particularly worrying in light of the fact that, during the reported period, a long list of cases was submitted to EU, raising awareness of cases such as that of Ramin Hossein Panahi and VUB (Free University of Brussels) university professor Dr. Ahmad Reza Djalali, both in danger of imminent execution, as well as the case of Mr Yousef Silavi, victim of enforced disappearance since 2009.

In the cases of Ramin Hossein Panahi and Mohammad Salas – the Gonabadi Darwish who was executed months ago – MEPs even wrote an official letter to the Iranian Embassy in Brussels condemning and calling for the release of these individuals, while their names were mentioned during European Parliament’s “exchange of views” committee meetings on human rights (DROI) and foreign affairs (AFET).”

Shima Silavi does not mince her words whether in relation to the cowardice of the increasingly top heavy and bureaucratic European Union ‘executive councils’ nor to the Iranian regime, like too many others now in this period of back sliding (if not naked contempt) for human rights and standards if not actual common decency:

“The EU claims to be united and firmly committed on the principles of human rights, democracy and the rule of law. However, it has repeatedly disregarded Iran’s terrifying number of executions, torture, public lashing, stoning, women’s rights violations, persecution of ethnic and religious minorities, etc. Is a country with this record a suitable partner for the EU? Is it possible to have growth and development plans in a country that undermines social justice and individual and collective rights in all its shapes and form?”

Are you listening, Iran?

And while all this may be of little relevance to a Kurdish activist like Ramin Hossein Panahi, it sheds a little light on the many dark spaces those of us across Europe struggle with (or are enmeshed within) in our work to translate the rhetoric and aspirations of human rights into an active, engaged and participatory activity that reaches across divides to unite people in our common humanity.

…and likewise the current increasingly flagrant abuse of citizens in so many places in our world – by dictators and authoritarian regimes that appear to be confident that no action will be taken against them.

As to Iran, Komala spokesperson and a senior member of the organisation, Kako Alyar, spoke against Iranian repression against the Kurds carried out by the regime on the basis that:

“Kurdish political parties are the most organized among the Iranian opposition.

“These along with many other facts scare the regime in Iran and make them threaten more, kill more, imprison more, and execute more, but clearly Kurds do not get scared… On the contrary; [they are] motivated to fight even more to achieve their legitimate rights.»

…and as part of our  ongoing CALL

for JUSTICE! FOR IRANIAN KURD

As in so many other hard times, a poem…

– Berthold Brecht «To Posterity» (‘To Those Born Later’) – with also the original German ‘An die Nachgeborenen’, (also listen to  Bertolt Brecht reading – Audio)…

Indeed I live in the dark ages!

A guileless word is an absurdity. A smooth forehead betokens

A hard heart. He who laughs

Has not yet heard

Ah, what an age it is

When to speak of trees is almost a crime

For it is a kind of silence about injustice!

And he who walks calmly across the street,

Is he not out of reach of his friends

It is true: I earn my living

But, believe me, it is only an accident.

Nothing that I do entitles me to eat my fill.

By chance I was spared. (If my luck leaves me

They tell me: eat and drink. Be glad you have it!

But how can I eat and drink

When my food is snatched from the hungry

And my glass of water belongs to the thirsty?

And yet I eat and drink.

I would gladly be wise.

The old books tell us what wisdom is:

Avoid the strife of the world

Live out your little time

Not fulfillment of desire but forgetfulness

I can do none of this:

Indeed I live in the dark ages!

I came to the cities in a time of disorder

I came among men in a time of uprising

And I revolted with them.

I ate my food between massacres.

The shadow of murder lay upon my sleep.

And when I loved, I loved with indifference.

I looked upon nature with impatience.

In my time streets led to the quicksand.

Speech betrayed me to the slaughterer.

There was little I could do. But without me

The rulers would have been more secure. This was my hope.

You, who shall emerge from the flood

In which we are sinking,

When you speak of our weaknesses,

Also of the dark time

That brought them forth.

For we went, changing our country more often than our shoes.

In the class war, despairing

When there was only injustice and no resistance.

For we knew only too well:

Even the hatred of squalor

Even anger against injustice

Who wished to lay the foundations of kindness

Could not ourselves be kind.

But you, when at last it comes to pass

That man can help his fellow man,

Do no judge us

Was sind das für Zeiten, wo

Die in Not sind?

A time for poetry? When… “there was little I could do. But without me / The rulers would have been more secure. This was my hope.”

“The music is turned off. And, as always happens, the tyrants draw more strength from the silence to stifle their victims in blood…

… even in these terrible and desperate moments, it is still possible to fight and resist, with the most powerful weapons of all: the word, literature, poetry.

…Poetry has always lived on the barricades and accompanies revolutions. When they are then betrayed, it fades and goes out, but it never dies. Reborn forever as a phoenix.

Surprised, in another prison cell, in every other space where humanity is oppressed and tortured, in every place and time in which men and women claim life and dignity.”

Time now for Iran to hear these calls and do the right thing!

Are you listening, Iran?

And reexamine the evidence used against him in relation to his alleged crimes.

The world is waiting…

From: (“fair use”) Iran Human Rights