Home > Magazine > Cultures > ON A DAY THIS WEEK > [35]…Years Later: Memory and Violence in Literary Sabras and Shatilas

[35]…Years Later: Memory and Violence in Literary Sabras and Shatilas

For the last 2 years each September, ArabLit editor, Marcia Lynx Qualey has published a list of literary references, to inform on, as well as remember, the Sabra and Shatila massacres in Lebanon’s Palestinian refugee camps 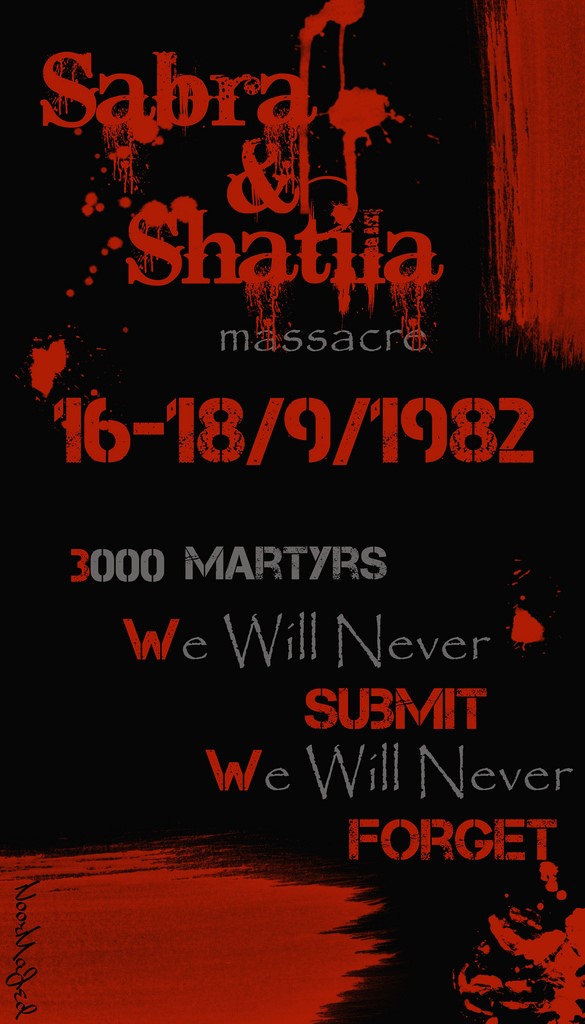 For the last 2 years each September, ArabLit editor, Marcia Lynx Qualey has published a list of literary references, to inform on, as well as remember, the Sabra and Shatila massacres in Lebanon’s Palestinian refugee camps: “They continue to show up in novels, poems, and memoirs, seen from different vantages” – “It is a site to which literature returns and returns; still attempting, if not to make sense, to make connections, to reformulate the questions...”  Copy below, lest we forget: “It happened once and it can happen again. This is the heart of what we have to say…” (Primo Levi)

But artistic representations are not aiming to hold a mirror to the moment, but to place it into a context of other moments, to interrogate how we understand it, how it was exploited, how it changed in our memories; how it changed our understandings of self.

Jean Genet’s “Quatre heures à Chatila” (“Four Hours in Shatila”). Genet was among the first outsiders to witness the immediate aftermath of the massacres, and he wrote about this experience. “Sometimes a dead child blocked the streets: they were so small, so narrow, and the dead so numerous. The smell is probably familiar to old people; it didn’t bother me. But there were so many flies. If I lifted the handkerchief or the Arab newspaper placed over a head, I disturbed them. Infuriated by my action, they swarmed onto the back of my hand and tried to feed there.” Translated by Daniel R. Dupecher and Martha Perrigaud. 1983.

Jean Said Makdisi’s Beirut Fragments: A War Memoir. The events of Sabra and Shatila are refracted through Makdisi’s personal memories; the events will continue to reappear in memoirs, seen through different experiences and imaginations. 1991.

Bahaa Taher’s Love in Exile. A novel about living in exile, including how one processes news while in exile. 1995.

I ran to turn on the television. The soap opera Dallas was on. I left the television on and turned on the radio. I turned the dial to the different stations, but there were no newscasts. There were music and songs everywhere. But while I was turning the dial quickly and incessantly, the soap opera on television was interrupted. A female announcer with an expressionless face came on: “We’ve just received a special report from Beirut. We advise sensitive and seriously ill people not to watch this report.” (Translated by Farouk Abdel Wahab.)

Elias Khoury’s Gate of the Sun. Khoury, here as elsewhere, is obsessed with the intersection of memory and violence, and how they change one another. Dunya, a mutilated girl who survived the Sabra and Shatila quicklime pits, recites her memory of the events to “serve” the Palestinian cause as a “fund-raising tool.” Her memory is stripped of any real meaning, either for her or for others, as she moves from meetings to TV shows to repeat what she saw — or now remembers that she saw — during those two days.

There is also a group of French artists who come to Shatila because they want to stage Quatre heures à Chatila. Translated by Humphrey Davies. 1998.

Radwa Ashour’s Spectres. This is also a memory of the memory — as now the memories are not reflected directly onto the page, but appear through other memories. Ashour’s co-protagonist, Radwa Ashour, remembers how she was not following the news about Sabra and Shatila as events unfolded, because she was in transit between Budapest and Cairo. In one of the narrative’s more emotional moments, she tells of her frustration at not having been attentive to the news, despite her acknowledgement that this attention would not have changed the outcome.

Yet attention means that you are involved in the event, that the person who has been killed is yours and that you belong to him. Then again, no—not altogether. … Perhaps it is similar to what my mother-in-law felt every time she thought of her son Mounif… She tries to remember what it was she was doing at 11 o’clock on Monday night. Was she asleep? How could she have been asleep? The idea nearly drives her mad, sleep becomes a guilty act, and the fact that she doesn’t know doesn’t mitigate, but rather intensifies the guilt. (Translated by Barbara Romaine.) 1998.

Mai Masri’s Children of Shatila. Masri gives a camera to two children in Shatila to ask questions and explore lives. As noted below, the film is available on YouTube. 1998.

Adania Shibli’s Touch. In this disorienting novella, told through the lens of an eight-year-old girl, the narrator must come to grips with these strange words: “Sabra” and “Shatila.” Shibli herself was eight when the massacres happened.

The girl tried to understand the meaning of the words Sabra and Shatila. Maybe they were one word. The word Palestine was unclear, expect that it was forbidden. The color of the green board resembled that color of cactus.(Translated by Paula Haydar) 2003.

Mahmoud Darwish’s In the Presence of Absence. The massacres still haunted Darwish’s writing, as he remembered them through the lens of Genet’s writing.

You will know from radio stations that the night of Sabra and Shatila was all lit up so that the killers could peer into the eyes of their victims and not miss a moment of ecstasy on the slaughtering table. You will read what Jean Genet wrote:

What partying, what feasting went on there as death seemed to take part in the pranks of soldiers drunk on wine, on hatred, and probably drunk on the joy of entertaining the Israeli army, which was listening, looking, giving encouragement, egging them on. I did not see the Israeli army listening and watching. I saw what it did. Killers had carried out the operation, but numerous torture squads were probably the ones who split skulls, slashed thighs, cut off arms, hands and fingers, and dragged the dying and disabled by ropes, men and women who were still alive. A barbaric party had taken place there: rage, drunkenness, dancing, singing, curses, laments, moans, in honor of the voyeurs who were laughing as they sat on the top floor of the Akka hospital.

You cannot cross the threshold of pain nor reach the source of the nightmare to bear witness to your body being chopped up nor peer into the eyes of your killer, whom you know very well. You cannot speak to anyone, because the world is empty of the living and filled with the dead who bid farewell yesterday to their brothers and protectors who sailed on Greek-built ships of Trojan symbolism. The victims did not finish any of their tasks: they did not finish their dinner, prayers, or nightmares. (Trans. Sinan Antoon) 2006.

Ari Folman’s Waltz with Bashir. A Hebrew-language engagement with Sabra and Shatila that Palestinian-British author Mischa Hiller, who wrote a novel about the massacre, says “left too much unsaid.” 2008.

Mischa Hiller’s Sabra Zoo (read an extract). Palestinian-British novelist Mischa Hiller told an interviewer that he was living in Beirut when the massacre happened and he carried it with him until he wrote the book. 2010.

Radwa Ashour’s Tantoureya. This is Ashour’s big Palestinian epic. In it, Ruqayya narrates her personal history and a history of Palestinians and Palestinian refugees. But she cannot write about this. In a cry not to exploit the moment any further: “Stretch out a sheet as you saw them doing, to cover what you saw throughout the years, and the day of the smell and the flies. / Leave the page blank, Ruqayya.”  2010.

Najwan Darwish’s “The Nightmares Bus to Sabra and Shatila.” From a version translated by Marilyn Hacker and Antoine Jockey:

I slept in my parents’ house and I was dreaming about her house. When I awoke
I saw my brothers
Hung
From the roof of the Church of the Resurrection
Out of compassion, the Lord said: this is my own suffering.
I mustered up the hanged men’s pride and said: in my opinion, it’s ours.

Pain illuminates everything and I love it more than my nightmares.

Jana Elhassan’s Floor 99. The novel sits between the 1982 massacre and New York in 2000. Majd, one of the central characters, bears a scar from the massacre. In New York, he falls in love with a woman whose family are right-wingers who were involved in the massacre. In Floor 99, the massacre continues to feel its way into the present day. 2014.