Pepper spray, dogs and batons were deployed, there were 5 or 6 arrests and four housing campaigners required hosptial visits from injuries received in the course of the eviction of the Frederick St occupation 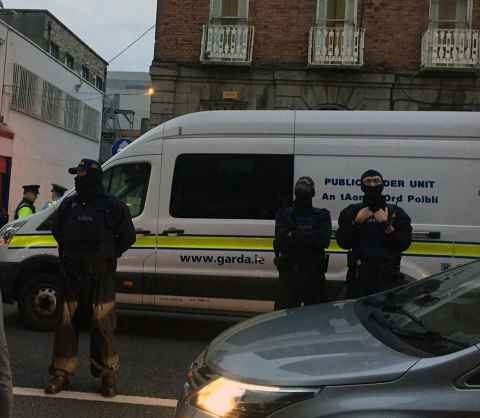 Masked Garda threatening people with batons in the aftermath of the violent eviction carried out by thugs in Dublin last night [September 11]. Pepper spray, dogs and batons were deployed, there were 5 or 6 arrests and four housing campaigners required hospital visits from injuries received in the course of the eviction of the Frederick St occupation. [Video]

The occupation was suddenly attacked by a gang of masked men who arrived in a van with no front registration plates, insurance or any other identifying details apart from a back plate which showed a UK registration plate. They smashed their way into the house using sledgehammers and industrial cutters. One housing activist who was outside and attempted to question them was thrown down the stairs and then arrested by the Garda.

Take Back The City – Dublin say “Gardai subsequently used force and pepper spray against peaceful protesters across the road” – our footage from about 20 minutes after the eviction shows masked Garda threatening people protesting the eviction.

The house that was occupied has been left empty for between 3 and 5 years and often had homeless people sleeping on the doorstep. Despite this, an injunction was rapidly granted against the occupation and when the occupiers resolved to stay in place we saw the violence of last night’s eviction.

Tens of thousands of buildings are left empty around Dublin, many of which could quickly be turned into accommodation for people. In other cities in Europe buildings being left abandoned was countered by the introduction of protection for squatters, allowing tens of thousands to house themselves. In Ireland they violently evict people who occupy buildings that have been left vacant for years, sometimes for decades.
—
The footage (above) is from the livestream we broadcast during the eviction to this page, check the page for the full footage.

Read this local residents account of the way she was treated by the Garda “When I asked him why he was wearing a balaclava he told me I had no right to ask that and to, I quote “fuck off ye stupid bitch”. He then grabbed my phone and put his hands on me. After I said he had absolutely no right to do so and he said he did. He then said “Ok, you are going to get arrested.” To be clear, this is on my lane way, where I live and I was asking a question.”

I just nearly had my phone taken out of my hand by a man in a balaclava, who then forcibly held me under the arm and pushed me away, simply for asking why people we’re being removed from the peaceful occupation of North Frederick Street house, the street I live off.

This man was a GUARD.

When I asked him why he was wearing a balaclava he told me I had no right to ask that and to, I quote “fuck off ye stupid bitch”. He then grabbed my phone and put his hands on me. After I said he had absolutely no right to do so and he said he did. He then said “Ok, you are going to get arrested.”

To be clear, this is on my lane way, where I live and I was asking a question.

He then had a female colleague (sans balaclava) but with a huge German Shepard come over and she said “I suggest you move away”. I said “I will not, I was just assaulted by a member of the police force with a balaclava on, can you explain that?” And she said he was entitled to as I was recording him.

She asked me what was my business on this lane and I said I live here. She again said “go home then”. I said “I will not, I want an answer as to why you are all wearing balaclavas. I am Irish and I have never ever seen this in my life”. To which she said “Then you are lucky”. To which I answered “surely not, this is not normal practice! That’s not an appropriate response!!” During all this time her German Shepard was beside her growling at me and barking at what was going on with the arrests behind him/her on Frederick Street. At this point she said “Ok I’m going to arrest you if you don’t move” and I said I’m not moving. She said “Ok, wait here”

I already said I was, but at this moment I was getting scared as two apparent GUARDS had said I was going to be arrested.

Next she went to her boss who was dressed in a high viz Garda uniform, he came and said “You need to move or you will be arrested”. I repeated the above, stating I was physically assaulted by a male Guard in uniform with a balaclava on, next intimidated by a female Guard with a German Shepard and he said “Why are you on this lane? You shouldn’t be here” I said “Because I live here”. He said “I suggest you go home”.

I said “No, not until I get an answer as to why a man in a Garda uniform assaulted me, a woman in same intimidated and threatened arrest me while holding a growling German Shepherd, and why you are suggesting I shouldn’t be standing here!”

**** At this stage protesters on Frederick street are chanting about the injustice that is happening, people who are homeless are being arrested for peaceful occupation ****

He then said “Ok, do you want to make a formal complaint?”

He had his notebook out at this stage. I said “Well I can’t, I can’t identify the first male Guard who assaulted me, he has a balaclava on”. He said, “I know him, so go ahead” I said “You didn’t even see it, so how could you?”

To which he replied “You can either complain or walk away” I said “That sounds like another threat, and given that 2 of your colleagues have threatened to arrest me, I’d rather not give you my details”.

At this point, I’m 6 minutes in and I’m getting scared due to intimidation, and I knew I wasn’t going to get anywhere.

He replied “Fine, so you better go home NOW” and I said “Better is a threat, I either should or will go home. And I’m going now because I have to, I will to.”

Everything above is not ok, or acceptable, and wreaks of unfair treatment of me (I can live with that) but more importantly those being taken out of a peaceful occupation due to homelessness. I am absolutely horrified. I am legitimately scared. Also, this happened at 7.10, and I was waiting to speak to a local police station until 7.50 to lodge a formal complaint. When got through they said, quote, “take it to the ombudsman”

We are fucked. Time to protest.

“This article is licensed free for non-commercial reuse, reprint, and rebroadcast, on the internet and elsewhere…via Copyleft, Open Content & Creative Commons…”

One of our members took this shot of the thuggish masked up cops at the eviction in Frederick street this evening. The cops used dogs, pepper spray and batons to allow a crew of thugs who arrived in a van with no plates and no tax to batter down the door with sledgehammers. They then arrested five housing activists who resisted the eviction and hospitalised at least one. The building had been allowed to lie empty for at least three years while people slept on the steps outside. We’ve seen this sort of Landlordism in the past and through uniting we beat it, but they used to wear red coats then.

By, Workers Solidarity Movement via Indymedia

Dublin, Frederick St occupation, ireland, Top
You may also like