Everything is set for the International Women’s Conference to be held in Frankfurt on Saturday and Sunday. 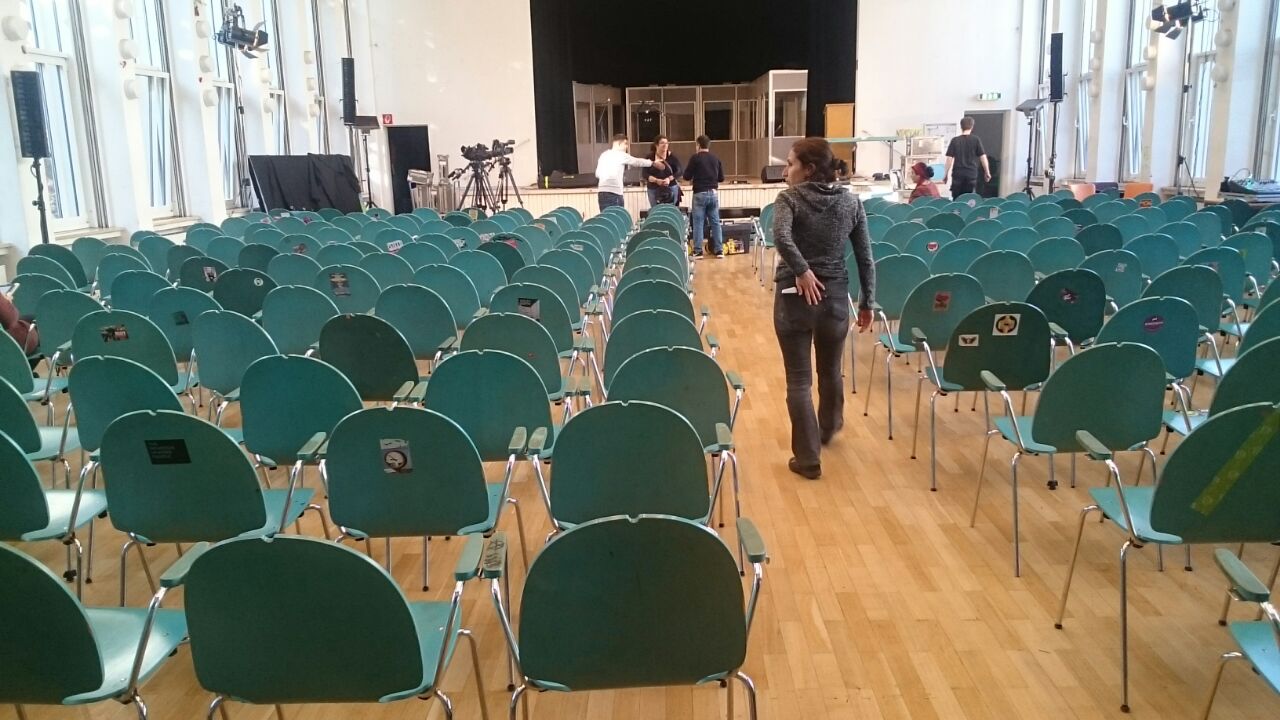 Over 500 women from around the world have already registered to the International Women Conference in Frankfurt that will open on Saturday.

Dozens of women have been preparing the hall and seminar rooms since early Friday morning to make sure nothing is left short.

The Rojava revolution no doubt carries the character of a women’s revolution. To talk about the achievements and challenges ahead, women from different parts of the world, who have been gathering and organizing around this new communitarian paradigm, will meet in the German city.

In the call to women and friends, the conference organisers write: “We want to bring together and combine our knowledge, power to change and our experiences in the conference “Revolution in the Making”. We think that as much as an in-depth analysis of state-class civilizations’ ways and methods used in the colonization of women there is a need for the revival of the resistance memory of women”.

Organisers added: “We find it extremely important that we share experiences; so that we can be prepared for patriarchal system’s new attacks. We will thus be able to create paths, methods and perspectives that can match the conditions, qualities and needs of our age. So that we can organize ourselves and create our alliances from the local to the universal. Against the constant attacks of the patriarchal system we will be able to weave a durable network of resistance. Thus, we will have the opportunity to become an active subject of the most gripping struggle of our age.

Now is women’s time, now is the time to weave this future together and is time to make the 21st century the century of women’s and people’s freedom!”

Here the program of the conference:

Never before in history women have been exposed to such a deep and stratified exploitation as in capitalism. Together with the nation-state capitalism constitutes the most institutionalized expression of patriarchy. Moreover when becoming a system capitalism started by destroying societies based on mother-women culture, which can be seen as its antipode. If so, how shall we define the connection between the patriarchal system and capitalism? Why and how has the male dominant system reached its highest level in capitalist age? And can a women’s liberation struggle that has no anticapitalist character succeed?

The capitalist world system has entered the 21st century with a structural crisis. According to its character it is trying to emerge from its systemic crisis by concentrating the attacks on its contraries. In particular we need to talk about a systematical war against women. But crises always also contain the opportunities for strong risings. Which risks and opportunities does the patriarchal systemic crisis imply for women’s liberation? How can we estimate the current crisis from female perspective?

In capitalist modernity power is reproducing itself based on ideological pillars: Sexism, nationalism, religionism and scientism. While these pillars can’t be separated sexism is the basis of all forms of power. What is the relationship between sexism and the other three main ideological pillars of capitalist modernity? And how to handle nationalism, religionism and scientism in the struggle against sexism?

Session III Women’s Struggle for Freedom: From Fis to Kobane and from Manbij to Raqqa

The road taken from Fis to Raqqa – how have we come to conclude that women’s liberation is more precious than the liberation of a country. How fundamental is the liberation of women and killing the dominant male to the foundations of the patriarchal system? How does Democratic Nation and sociology of freedom with its original content enable us to weave our own future? What role does Jineology play?

Turning our gains into a continuous and sustainable system is crucial. But for that we need to replace the most important pillars of the patriarchal order. The importance of organizing, networking, education, communal ecological economy, the non-state structures (including the system of co-chairs) and how to keep them that way.

Both the monopoly over the use of violence by the nation-states and other state forms of the past and the excessive and unrestricted use of violence by the revolutionary movements of the past and their inadequate analysis have formed our understanding of self-defense. Did we never defend ourselves or should we protected by others and if so by who? And in that case who using violence against us? How should we define and articulate our own understanding of self-defense? What are the precautions to be taken so that it does not evolve into the unwanted – patriarchal form of violence?

India is one of the countries where the clash between mother-women culture and sexism can be most intensively seen. On the one hand mother goddess culture, on the other hand widow burning, killing of female fetus, gang rape. How is it possible that in a country where women have been sanctified only a short time ago misogyny could reach such a high level? What role did colonialism play? And how do women in India resist in theory and praxis against different forms of sexism and exploitation?

The extrajudicial executions, police violence, systematical inequality and discrimination in the USA against black people are the local expression of a much more universal reality: Those whose lives are devalued by the bio-political order of hegemony, whose lives are ungrievable, who become open targets to killings. They are those who would shake the system at its roots if they would be free. In this sense, could it be a coincidence that parallel to the growth of the BlackLivesMatter movement under the leadership of women a person that stands for sexism and white supremacy became president of the USA?

Atargatis in Northern Syria, Ishtar in Mesopotamia, Anahita in Iran, Star in Kurdistan: In the Middle East, which has been a place of deeply rooted mother goddess culture, women are weaving a second women’s revolution. But the Middle East is also the place where patriarchy got institutionalized and today a vehement battle between male domination and women’s liberation is waged there. Could the women’s liberation struggle in the Middle East carry a universal quality because of the historicalness of the space? What a meaning does revolution within a revolution have here?

A efficient women’s liberation struggle against the patriarchal system needs acting in unison and networking. But how can we unite despite our differences? Which principles and understanding are needed for a common struggle? What are the difficulties and achievements of alliances? How to develop a common organizing model while protecting autonomy in practice?

In Latin America the killings of women have already reached the extend of a feminicide. Women have been fighting for years to make the killings visible at state level and to ensure that those responsible are held accountable. Recognising the complicity of the state they concluded that feminicide can only be stopped with a strong organisation. Movements such as, for example, Ni Una Menos started in Argentina and spread across Latin America. How can feminicide be stopped? What kind of organisation do we need?

Afghanistan, Iran, Turkey – the late 70s and early 80s were years in which the great revolutionary potential of the Middle Eastern societies, and especially of women, became visible. The hegemonic powers responded by promoting military coups, Islamist groups and political killings. Under the mask of democratization or as of 2001 the “fight against terror” they were actively involved in the promotion of bloody “civil wars”. They were thus particularly pursuing a special war against the revolutionary potential of women. The enslavement of women is the destruction of revolutionary culture. But Afghan women are fighting under difficult conditions against their enslavement by reviving their revolutionary culture.

Session V: Revolution in the Making: Weaving our future together

The upheavals of our times not only result in much pain, violence and the removal of millions of people from their land but also give us a chance to weave our own way of live. What are the parameters of what we are proposing? We know so much more than we ever did of our past, present and future. How possible is it to network within each of these parameters? The understanding of solidarity must change but how can we achieve the unity of efforts, of struggles, of doings, of creating, and of weaving them together.

Radha D‘Souza, Reader in Law at the University of Westminster, UK