Kobane. On the pistachio’s trail

In Kobane pistachios are once again being harvested. The Autonomous Administration is promoting new cooperatives to produce the precious and ancient nut. 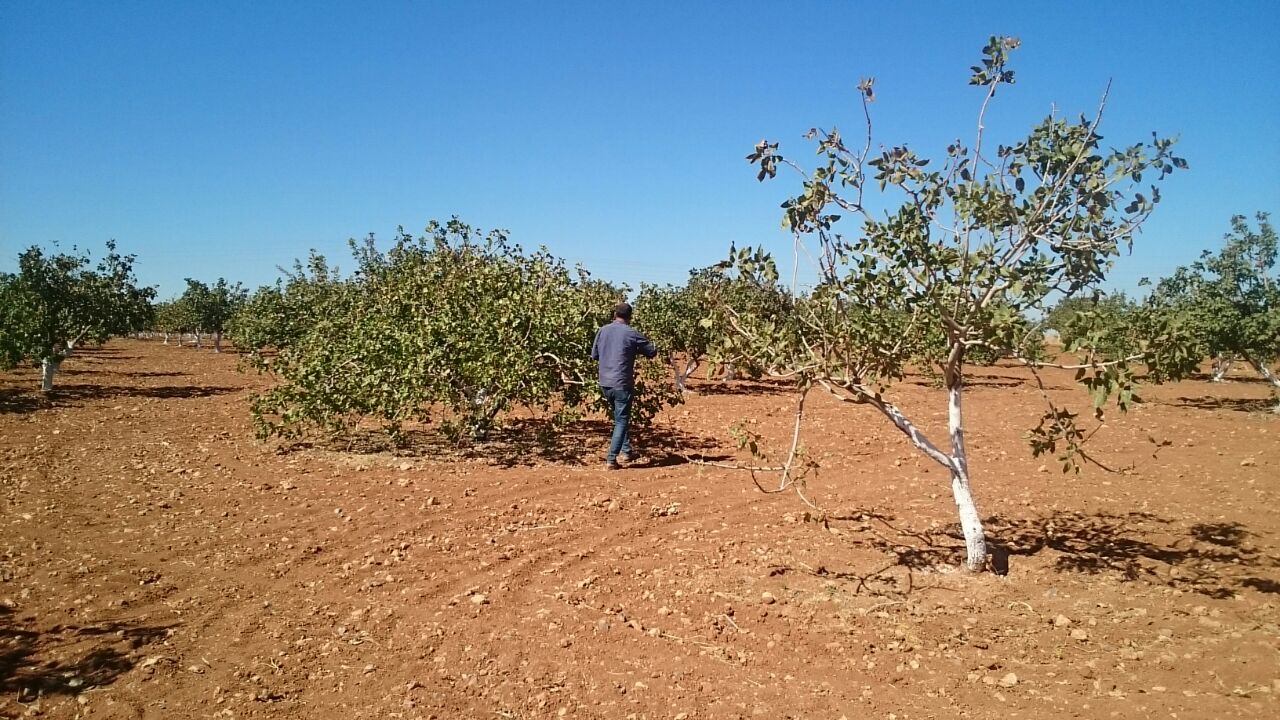 The pistachio has a long and interesting history. Native to the Middle East, pistachios are one of the oldest flowering nut trees. Recent archaeological evidence suggests that humans were enjoying them as early as 7,000 B.C.

Flourishing in hot climates, pistachios spread from the Middle East to the Mediterranean.

Legend has it that the Queen of Sheba decreed pistachios an exclusively royal food, going so far as to forbid commoners from growing the nut for personal use.

Nebuchadnezzar, the ancient king of Babylon, had pistachio trees planted in his fabled hanging gardens.

And in the first century A.D., the Emperor Vitellius debuted this prized nut in his capital city of Rome.

According to Moslem legend, the pistachio nut was one of the foods brought to Earth by Adam.

The name “pistachio” probably derives from the word pistak in the ancient Persian language, Avestan.

Pistachio nuts are mentioned in the Bible as precious gifts carried from Canaan to Egypt by the sons of Jacob.

Rojava and the region of Kobane in particular, has always been famous for its pistachios. The region of Manbij, in the North of Syria, also produced the precious seed.

The war which erupted in 2011 meant that the population had to flee their houses and the region of Kobane was not exempt from this mass exodus, when in 2014 DAESH besieged the city and surrounding villages. The people left their houses and the Kurdish People’s Defense and Women Units defended the city through a heroic resistance and finally defeated DAESH in January 2015.

People returned to the city in ruins and made huge efforts to rebuild it while at the same time trying to recover the agriculture production.

These regions, in fact, live mostly of agriculture and husbandry.

Pistachio trees have suffered a lot in Kobane as they were not looked after. But for the past year and a half production has been retaken.

ANF visited some of the newly harvested pistachio fields. Proudly one of the farmer looking after the fields tells of the quality and flavour of these ancient nuts. When it is completely ripe – he explains – the pistachios are at least 2 cm.

There are several pistachio gardens now in Kobane and surrounding villages. Use and distribution are determined by producers’ cooperatives.

Harvest can vary from 10 to 20 or even 50 kg per tree. As for the rotation, it is possible that some of the strong and old trees produce each year. But, explains the farmer, part of the 20,000 trees in these fields (around 8,000) will produce this year while the rest will give nuts next year.

Proudly the farmer explained that they only use organic fertilizer. And this despite the difficulties in finding good fertilizers, because of the war. Farmers collect the fruits by hand.

The Economic Commission of the Autonomous Administration has entrusted a quarter of the trees to the cooperatives of poor families in the villages. Currently there are about 60 workers. The number of producers per cooperative would be around 10.

The farmer explained that before the war, the pistachios were sold almost entirely to the regime and usually at a very low price. Now the Autonomous Administration is trying to impulse new projects and new cooperatives not just for production and consume inside the region and the Northern Syria Federation but possibly also abroad.

“Our pistachios – said the farmer – have a different, sweeter taste compared with those coming from Iran, for example”.