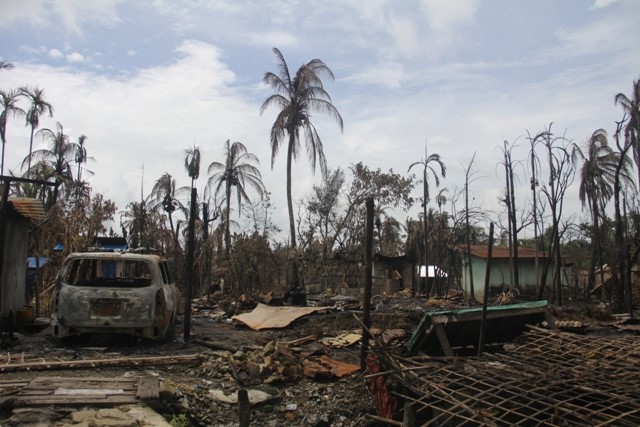 “During their operations the Tatmadaw has systematically targeted civilians, including women and children, committed sexual violence, voiced and promoted exclusionary and discriminatory rhetoric against minorities, and established a climate of impunity for its soldiers. The full findings we are releasing today show why, in our report to the Human Rights Council, we insist that the perpetrators of the gross human rights violations and international crimes, committed in Rakhine, Kachin and Shan States must not go unpunished. They also show why the top generals should be investigated and prosecuted for genocide in Rakhine State. I have never been confronted by crimes as horrendous and on such a scale as these.” (Marzuki Darusman, chairman of the UN investigative team)

Following the earlier release, on 27 August 2018, of the UN Human Rights Council’s 20-page Report where the Burmese military (the Tatmadaw)’s murder campaign against the Rohingya people in the western state of Rakhine, Myanmar was investigated and indicted…

…and following the later release, on September 18, of the full account of massive violations by this same military in Rakhine, Kachin and Shan States – the 444-page report by the UN fact-finding mission concluded “there was enough evidence to merit investigation and prosecution of Myanmar’s army chief and five other top military commanders for crimes against humanity and genocide against the Rohingya.”

“…it reiterates the Fact-Finding Mission’s call for the investigation and prosecution of Myanmar’s Commander-in-Chief, Senior General Min Aung Hlaing, and his top military leaders for genocide, crimes against humanity and war crimes.”

The Report also collects and details “credible evidence of mass killings, ethnic cleansing and genocide of the Rohingya people and called for Myanmar officials to face charges.”

As reported earlier, the findings against the Myamanar military for war crimes and crimes against humanity,  for “gross human rights violations and abuses” against the civilian population are extensive. They include:

The scorching of Rohingya settlements.

Large-scale gang rape and other sexual violence by Tatmadaw soldiers. (“The poignant testimony of one survivor laid bare the monstrous extent of sexual violence: “I was lucky, I was only raped by three men,” she said. Rapes were often in public spaces in front of families, including children.”)

Many children injured by being shot, stabbed or burned.

The burning of villages – “Rohingya populated-areas were burned down with nearby ethnic Rakhine settlements left unscathed”.

Amnesty International also documented  extensively the military’s atrocities,  including targeted burning of Rohingya villages,  the use of landmines and the commission of other crimes against humanity including murder, rape, torture, forced starvation and forced deportation as well as other serious human rights violations against the Rohingya. The organisation also documented war crimes against other ethnic minorities in Kachin and northern Shan States, where violations are ongoing.

Estimates of the total number of people killed to date remain uncertain. While Doctors Without Borders estimated 6,700 Rohingya deaths “in the first month of violence alone” recent figures estimate that figure could now increase to over 50,000 as 43,000 Rohingya parents have been reported lost, presumed dead in the six months to the end of 2017. Myanmar’s military official death toll still stands at 400. (Global Rights)

Add to this the estimated 750,00 people fleeing their home  in a mass exodus across the border into neighbouring Bangladesh…

Marzuki Darusman, chairman of the investigative team, was also quoted as saying Myanmar’s military commander Min Aung Hlaing should step down in the wake of the report.

“The only way forward is to call for his resignation and stepping down immediately,” he told a news conference in Geneva.

Gen. Min Aung Hlaing, who is the current commander-in-chief of the Myanmar Armed Forces, had earlier told the media that the apparently government-accepted military clearance operations in Rakhine State was “unfinished business” dating back to the Second World War:

“The security forces’ response to the ARSA attacks in August 2017 started within hours, “was immediate, brutal and grossly disproportionate”, suggesting “a level of preplanning and design” consistent with Commander-in-Chief Min Aung Hlaing’s stated vision to finish “the unfinished job” of solving “the long-standing Bengali problem”. (OHCHR)

The UN Office identified a list of alleged perpetrators “as priority subjects for investigation and prosecution”. These include:

“The investigators said the situation in Myanmar should be referred to the International Criminal Court, and if not, to a special tribunal. Myanmar is not a treaty member of the ICC – but it is one of the 47 member states of the Human Rights Council, meaning Monday’s report will carry greater weight than any that have come previously.

In naming six generals as prime candidates for prosecution at the ICC, the UN’s report admits that the civilian government in Myanmar has little power to control the country’s military.” (the Independent )

“Peace will not be achieved while the Tatmadaw remains above the law… The Tatmadaw is the greatest impediment to Myanmar’s development as a modern democratic nation. The Commander-in-Chief of the Tatmadaw, Min Aung Hlaing, and all the current leadership must be replaced, and a complete restructuring must be undertaken to place the Tatmadaw under full civilian control. Myanmar’s democratic transition depends on it.”

…Following this detailed investigation, criticism and now damning indictment of the Myanmar military…the UN Human Rights Council has finally taken steps to establish a body to:

“…collect, consolidate, preserve and analyze evidence of the most serious international crimes” in Myanmar since 2011 as well as to “…prepare files…to facilitate and expedite fair and independent criminal proceedings.” Importantly the resolution calls on the UN secretary-general to appoint staff and allocate the resources necessary to support the body’s work.

Also decides that the mechanism shall:

Be able to make use of the information collected by the fact-finding mission and continue to collect evidence;

Have the capacity to document and verify relevant information and evidence, including through field engagement and by cooperating with other entities, as appropriate;

This, as said, to follow the allocation of staff and resources to support the proposed work “including  the  logistical  and  technical  resources necessary to support the functioning of the mechanism”. (‘Situation of human rights of Rohingya Muslims and other minorities in Myanmar’)

“The Human Rights Council took an important step for justice by creating a body to pinpoint criminal responsibility for the countless atrocities in Myanmar,” said John Fisher, Geneva director at Human Rights Watch. “It deals a blow to Myanmar’s deep-seated culture of impunity and moves victims closer to seeing Myanmar’s generals held to account.”

The 47-member Human Rights Council voted 35-3 (China, the Philippines and Burundi — voted against; seven countries also abstained from the vote.) to create this «independent mechanism» with the purpose of taking action against the alleged rights violations (and violators) in Myanmar.

The primary purpose of this mechanism will be that of securing evidence that could be used in pursuing criminal indictments.

The resolution establishing the new body was presented by the European Union, led by Austria, and the Organization of Islamic Cooperation, led by Pakistan.

The decision to move ahead with action against those named as perpetrators “was immediately hailed by Amnesty, Human Rights Watch and other rights groups” and “will go to the UN General Assembly in New York for final approval.”

“Responding to the UN Human Rights Council’s adoption of a resolution on Myanmar in Geneva today, Tirana Hassan, Amnesty International’s Crisis Response Director, said:   ’Today’s resolution is an important step forward in the fight for accountability in Myanmar, making the prospect of justice possible for the Rohingya and other ethnic minorities who have suffered atrocities at the hands of the country’s security forces.

“While the UN Security Council remains bogged down by politics, the Human Rights Council has stepped up to the challenge with this serious and constructive approach to pave the way for justice. It sends a clear message of solidarity to the victims and survivors, as well as a stark warning to Myanmar’s military that their crimes will be punished.”

Faced with the appalling disregard, either for its ‘own’ people, external criticism or a respect for human rights, it is now ‘obviously’ a matter of extreme urgency that these international mechanisms, similar or parallel to the International Court – (“an «ad hoc» international court or a national court that could claim “universal jurisdiction” to prosecute international crimes”) – be established, resourced and supported in order to finally deliver justice to the “victims of murder, sexual violence, and mass arson.” To say nothing of attempting to prevent future atrocities…

“Raising the mechanism’s profile in the General Assembly would also make clear that all countries, including Security Council members, should make justice a priority as part of any proposed solution to Myanmar’s devastating rights crisis.”

Michael McGrath of Save the Children, (one of the charities working to support Rohingya refugees) said it was time “[for] the UN Security Council to refer Myanmar to the International Criminal Court without delay… The international community needs to send a firm signal to all perpetrators, including the Myanmar military, that crimes of this magnitude will not be allowed to pass unaccounted for.”

“The new mechanism mandated today will collect and preserve evidence and prepare case files for any future criminal prosecution of those responsible for some of the gravest crimes under international law.

“While the UN’s Human Rights Council has today taken meaningful action in the fight for justice in Myanmar, more work remains to be done. The UN Security Council has a clear responsibility to refer the situation to the International Criminal Court. Its ongoing failure to do so is a stain on its credibility as the global body tasked with maintaining international peace and security.”

Hopefully this process has begun.

At the same time, R. Iniyan Ilango, the United Nations advocacy program manager at Forum-Asia, “noted that the resolution called on the U.N. to look into its own involvement in Myanmar since 2011. The fact-finding mission reported last month that the U.N. had favored “quiet diplomacy” over human rights concerns.

Justice, once again, painfully slow, and certainly not sure, in our violent world, desperately searching for its future?

A burnt down house in a Rohingya village in northern Rakhine State, a result of sectarian violence in August 2017.

The Rohingya Crisis: Past, Present, and Future (APHR)

Same Impunity, Same Patterns – SEXUAL ABUSES BY THE BURMA ARMY WILL NOT STOP until there is a genuine civilian government (WOMEN’S LEAGUE OF BURMA – January 2014)