Troubles On the Way: Border Concerns Raised in Northern Ireland

With the deadline for negotiations on a british departure from the e.u. fast approaching, the reality of a “no deal” brexit is becoming increasingly likely 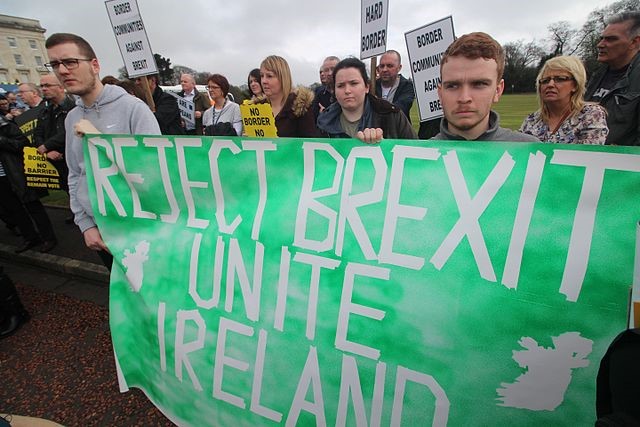 With the deadline for negotiations on a british departure from the e.u. fast approaching, the reality of a “no deal” brexit is becoming increasingly likely. This would have a number of serious consequences, not least of which is the future of the british colonial holding in Northern Ireland. At the moment the current open-border policy along the Ireland/Northern Ireland frontier is characterized by a lack of customs restrictions between the two territories, which is a result of the shared markets of the e.u. (of which Ireland is a part) and britain. If the british government cannot secure an exit deal that includes them in some kind of shared market or travel privileges, they could see a return of tariffs on european goods entering britain over their border with Ireland. Essentially, this would necessitate some kind of compromise on the open border, one that has terrible consequences for british imperialism either way.

On one hand, the british government could restore the hard border, which would violate one of the key points of the Good Friday Agreement that ended Irish territorial claims on the northern counties, and ensured a loosening of british colonial bureaucratism in the region. Both Brussels and Dublin have stated that a hard border is not an acceptable result, with many Irish citizens infinitely more concerned than the bureaucrats of the european union. For them, a hard border means a physical barrier between them and their family members, and an end to the free transit of goods to and from the region. Theresa May has stated she wants to avoid such a result, but despite her assurances, she cannot make any guarantees without a deal outlining it—a more and more distant hope.

There is another option if a deal cannot be reached, however. Britain could agree to move the customs checks across the Irish Sea to the british mainland, only taxing goods and checking passports once they’ve entered the island. To the conservatives and unionists, however, this is a non-option, with proto-fascist ulstermen threatening violence if such a move is made. They can rest easy, however, as the conservatives and even liberals in britain are not about to cede such an important element of british sovereignty for the sake of a few catholics. Northern Ireland is britain, at least in their minds, and to unify the economy of Ireland and its colony in the north, separate from the rest of britain, is out of the question.

Unfortunately for the Irish people, those same conservatives are the ones doing the negotiations in europe, humiliating themselves and pushing any notion of an open border further over the horizon. Either way, the british imperialists are backing themselves into a corner. If they lose the support of ulstermen, they won’t win the allegiance of those catholic youth more and more vigorously pushing for a united republican future. Moreover, the slow-motion trainwreck that is the current government in britain cannot afford any more weakness in the public sphere. They must cling desperately to what they have, and to cede sovereignty at this time would be crippling to their hegemony worldwide, at an important moment in inter-imperialist competition.

For the Irish masses, this is just one more stone atop the pile, currently crushing their autonomy. The neo-colonial state of affairs that resulted from the ultimately capitulationist Good Friday Agreement has done the youth of Ireland no favors. In the northern counties, the opposition is still met with silence and repression, not only from the british state but from the ulstermen and their gangs too. It is no mistake that, open borders or not, the Irish youth turn increasingly toward socialism and republicanism in the occupied regions. If the checkpoints return, it will only serve to vindicate an already existing rebellious trend.

It is unclear if the return of hard borders will result in a resumption of territorial claims by Ireland, or if the cozy monopolists that dominate the south will prefer stable business over national dignity. After all, for so long even the supposedly “nationalist” segments of the Irish bourgeoisie have been content to accept the state of affairs that keeps the northern counties under british rule. This is probably because of the great amount of wealth the stability of such an arrangement has brought them. Ireland, after all, sits among the rich countries now, a valued member of the european shared market—a full imperialist partner—privy to all its exclusive arrangements, all to the detriment of the global south.

In Northern Ireland as well, many do quite well for themselves for much the same reason, and the promise of good wages and low costs in the peacetime markets has been enough to keep ideas of republicanism off the table for many. But can the situation hold? The youth certainly hunger for something a bit more than stable employment, and dissident republicanism has been increasingly worrying the british authorities with a marked increase in general anti-british sentiment. Social peace depends on more than just a promise, and quickly the circumstances of that promise are quickly evaporating. The youth of Northern Ireland may not wait for the consent of the southern exploiters and monopolists to resume struggle, and some segments have already forgone it.

Genuine revolutionaries in Northern Ireland are no more bound to the will of monopoly capital than those in the south, and only obscurantist liberals would demand they be. The peculiarity of their position should not lead them to trade one ill-bought social peace for another. That is why it is key that communists take the lead on these initiatives, breaking from the reformist bourgeois democrats who would wait for the monopolists in Dublin to save them. Indeed, without a revolutionary unity between the northern counties and the Third World, an integration and unity of the north into the existing structure in the south would only serve to transform an oppressed nation more cleanly into an oppressor one.

We have no doubt that comrades, such as those in the Irish Republican Socialist Party, will continue to resist those liquidationist tendencies. Ultimately, the youth and progressive masses of Northern Ireland deserve more than the moribund neoliberalism of the southern republic. The separation and rivalry of forces in Northern Ireland is likely to intensify as the british state slowly unravels in a deepening crisis of imperialism. Our hopes are that genuine progressive and revolutionary forces win out in this engagement, and find unity with the only forces which matter: those of progressive humanity located primarily outside the imperialist countries, in the Third World. Unity with imperialism via the european union can only bring more misery to the world.

Whatever the outcome is, one thing is for sure: the crisis is unavoidable. The british imperialists are moving at a dizzying speed toward disaster, mixing incompetent leadership, militarism and a dismal economic future. While we cannot yet tell what shape the coming struggle will take, we know that it is coming. Whether the british imperialists back their ulstermen, or they sell them down the river, there are troubles on the way. The monopolists in london are being made to run the gauntlet, and the whole world will see how low a country can drop when it has fallen out of favor with the popular imperialist blocs. Let’s hope that history wins out, and the Irish people, guided by revolutionary leadership, can break the imperialist long peace and help conquer peace for humanity.