“Imperialism Has No Friends”

Two strategies, one goal: the United States and the Kurdish movement in Syria 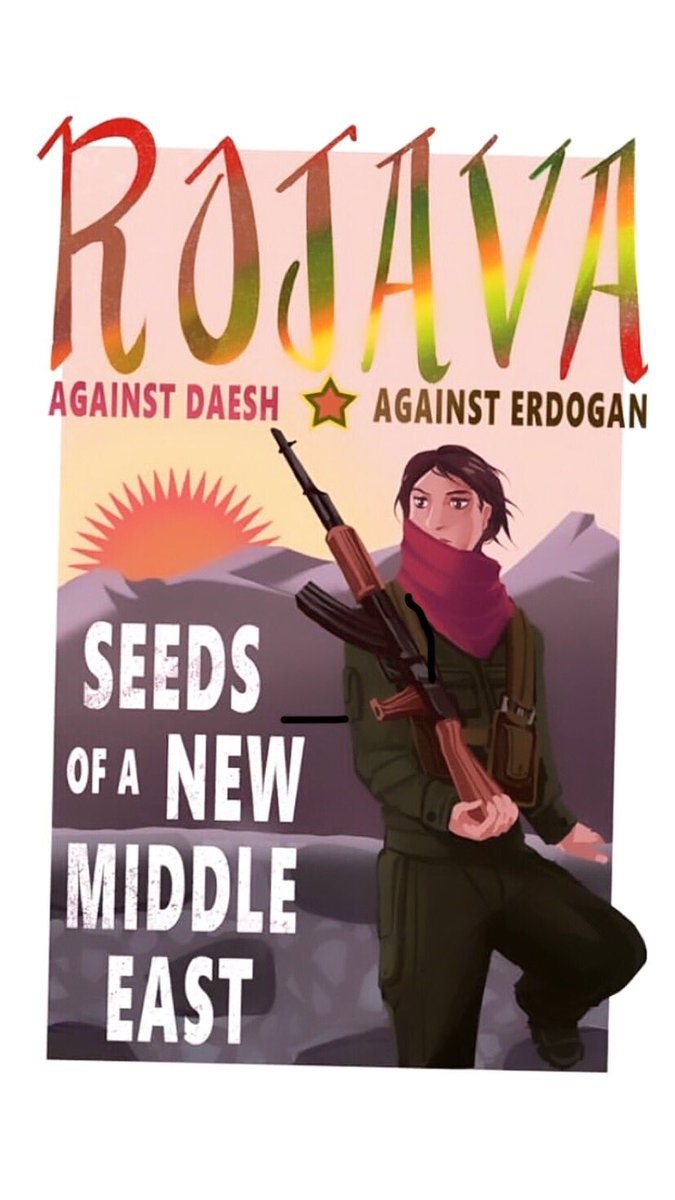 On Wednesday… President Donald Trump announced the withdrawal of US troops from Syria. The Islamic State had been defeated and the soldiers could now return home, he proclaimed, appearing as confused as ever. Trump took this step just as the Turkish autocrat Recep Tayyip Erdogan was intensifying his threats of annihilation against the Kurds in Rojava, announcing another invasion of Northern Syria. A few hours earlier we learned that Washington had agreed to sell Patriot missiles worth 3.5 billion Dollars to Ankara – a transaction that had been a topic of debate for a long time. Thus, it looked as if a comprehensive Syria deal had been forged between Trump’s and Erdogan’s governments.

So far, so straightforward. When it came to assessing the role of US imperialism in Syria, however, many commentators predictably dropped the ball. Some of them – the German Left Party parliamentarian Alexander S. Neu, for instance – thought of Trump’s withdrawal as some kind of welcome move towards a policy of peace. As if the US ever acted against its own interests without any discernible need to do so!

Self-proclaimed ‘anti-imperialists’, whose analysis has comprised glamorising the Syrian, Russian and Iranian governments as selfless and disinterested upholders of international law for years, went a step further; they were looking forward to an imminent Kurdish genocide. Had they not always warned the Kurds that it’s no good getting in bed with the United States? Serves the Kurds right! No blood sacrifice is too great for the keyboard warriors if it proves them right on the internet – provided it isn’t their own blood, of course.

Those who had never understood a thing about the region weren’t the only ones to screw up, though. The same was true for many supporters of the Rojava revolution hailing from the more liberal end of the spectrum. Surprised by the viciousness of our American ‘friends’, they got bogged down in moral appeals to the US – as if imperialist political decisions were a matter of conscience and integrity.

Let us take a look back. Having defended the Kurdish border town of Kobane against the Islamic State, the People’s and Women’s Protection Units (YPG/YPJ) embarked on an alliance with foreign countries that were also eager to push the IS back. IS was then militarily driven back little by little, which involved very serious losses, especially for the Kurdish forces. As the liberation of Syrian territories was still ongoing, the Syrian Democratic Forces (SDF) containing Arabic, Assyrian and Kurdish militias were set up. The SDF were referred to as ‘allies’ by the United States – and in diplomatic proclamations, the SDF described the US as valued “partners”. There was a significant degree of arms deliveries and air support.

At any rate, the more politically conscious parts of the Kurdish resistance – i.e. all those orientating towards the ideas of the Kurdistan Workers’ Party (PKK) – had no illusions in this alliance from the outset. It was a ‘tactical alliance’, they said, and they were well aware that the United States and the Kurdish movement were ultimately following opposing objectives. In January 2018, a leading PKK guerilla fighter, Riza Altun, stressed once more, “We are engaged in an anti-imperialist struggle. An anti-imperialist force cannot say that imperialists have betrayed it. Just as global imperialism and the regional hegemonic states represent their own strategic position, the paradigm created by the Kurds represents their own clear line and distinct stance. The strategic partners of our line are the global democratic forces, the social forces, and the anti-system forces”.

This declaration was never enough for the armchair anti-imperialists. Furiously, they went to fight in the only war they had ever known: the one on the internet. For them, the Kurds were traitors and footsoldiers of imperialism, and they let them know as much in Facebook and blog posts.

But in fact, the internet tough talkers didn’t even have to take it from the PKK, which incidentally had been fighting NATO in the Middle East for 40 years. It would have been sufficient to find out what US imperialism had to say about its interests with respect to the uneven alliance. Countless papers published by various think-tanks during Barack Obama’s and Donald Trump’s presidencies formulate a clear strategy: the US must commit to a double strategy. The Kurdish institutions in northern Syria must be co-opted through concessions and indirect coercion (i.e. through the necessities arising from Turkish threats). At the same time, Turkey must be supported in fighting the PKK.

The goal was to turn the Kurdish movement into an actual proxy of the US in the same way as Maoud Barzani’s right-wing Kurdish regional government in northern Iraq is one. But to achieve this, one would have to eliminate – or at least alienate from Rojava – the political and ideological backbone of the movement, namely the PKK guerillas in the mountains. Had this strategy succeeded, it would have destroyed the revolution of Rojava even without an invasion. The deadly embrace of US imperialism would have rendered it an entity completely estranged from its foundational ideas and no different to other such regional spheres of influence in the Middle East.

At the beginning of his presidency, Donald Trump too pursued this strategy. At least since the liberation of Raqqa, however, it transpired that Washington could opt for a different path to impose its interests. Returning to its trusty old ally, Turkey, played a major role in this – not least because Ankara happened to be in a good position. Erdogan skillfully exploited Russia’s need to protect its southern flank and bring parts of the armed jihadist opposition in Syria under control. For Moscow, it was fundamentally more important to estrange Turkey from NATO than it was to “protect the integrity of Syrian territory”, as the rhetoric recited by Russia and its leftist fans had it.

The antagonisms between Moscow and Washington that Erdogan so shrewdly exploited were the reason why the Turkish invasion of the northern Syrian province of Afrin was tolerated by both great powers in early 2018. By this point at the latest, the tactical alliance between the US and the Kurdish movement had essentially come to an end.

Naturally, the Kurdish side strove to maintain the alliance for as long as possible. Firstly, because it curbed Ankara’s desire to annihilate; secondly, because air protection allowed the Kurdish movement to go a bit easier on its own forces in the struggle against the Islamic State. At the same time, the US increasingly stopped making any bones about the fact that the times of supposed ‘partnership’ were over for good. A high-ranking functionary of the Kurdish movement, Zekî Şengalî, fell victim to a planned assassination by Turkey and the US in the Sindjar Mountains. The US put money on the heads of three leading PKK cadres. Turkey conducted air raids against the Makhmur Refugee Camp. These were all harbingers of the present handover of northern Syria to Turkey.

Trump’s announcement of military withdrawal, meanwhile, sends out a clear strategic signal: the US no longer intends to secure its spheres of influence by co-opting the Kurdish movement and its Arab allies, but instead through direct engagement with its NATO partner Turkey. This, in turn, can only work if the YPG and YPJ are militarily defeated. Ankara wants to make sure of this through genocide, or at least by ethnically cleansing the relevant geographic areas – that is, by displacing the Kurdish population. The plan is to reenact the Afrin blueprint in the other northern Syrian cantons, Jazira and Kobane. Thus, the regions would be conquered by a coalition of Turkish army forces and tens of thousands of jihadists, then put under the control of an administration answering to Ankara. Pillage, murder, and rape would accompany this process.

The fact that the US is now doing what the PKK has always predicted it would does not render the tactical alliance wrong in hindsight, nor does it mean that all is lost. For one, the US withdrawal means that the geopolitical conditions are changing anew. Damascus can have little interest in a Turkish protected zone for former IS fighters, al-Qaeda groups and assorted jihadists in northern Syria. Moreover, it remains to be seen how Russia reacts when it realises that all the minor cracks in the time-proven relationship between the US and Turkey are being fixed.

What matters more to us, though: a geopolitical focus on the balance of forces alone is never enough. Politically and militarily, the Kurdish movement is a strong autonomous factor. It is deeply rooted in the population and has millions of supporters. It is preparing itself for the defence of its territories – moreover, the PKK has already announced that every attack will be answered on Turkish territory as well. The present gains will not be given up without a fight. And as for us in the west, we should not succumb to resignation or despair either.

Our friends from Kurdistan told us time and time again that the left, socialist and democratic international forces are their long-term strategic partners. Being those forces, our task is now to wage a struggle in the countries in which we live to defend the Rojava revolution. Even if we don’t feel up to the task, it still remains our task. Nobody will do it for us. In the coming days and months, every public demonstration, every campaign, every act will count – no matter how minor. This is the work we should focus on now – not mourn or wonder why those who were never our ‘friends’ have now ceased being our ‘friends’ for everyone to see.