The Trump administration is set to rapidly withdraw U.S. military forces from northeastern Syria, where the U.S. has occupied around 30 percent of Syrian territory since mid-2016 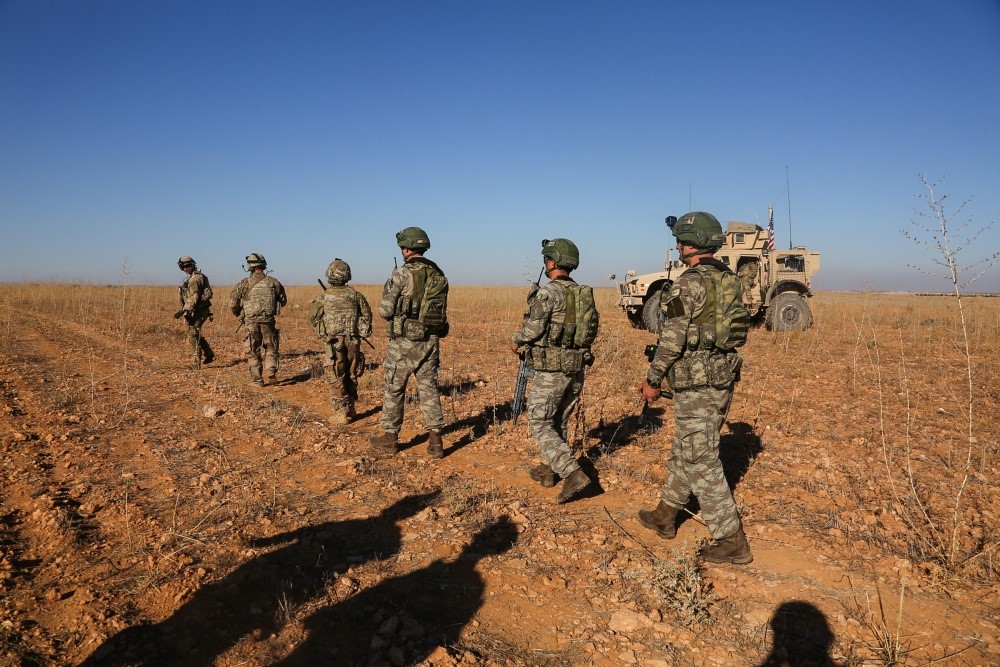 WASHINGTON — In what is being characterized by some as a “drastic reversal,” reports in both the Wall Street Journal and the Washington Post have claimed that the Trump administration is set to rapidly withdraw U.S. military forces from northeastern Syria, where the U.S. has occupied around 30 percent of Syrian territory since mid-2016. The Pentagon has officially stated that there are 2,000 troops in Syria, though the true figure is believed to be closer to 5,000.

We have defeated ISIS in Syria, my only reason for being there during the Trump Presidency.

President Donald Trump, who was allegedly responsible for the decision, all but confirmed those reports on Twitter just hours after the WSJ report was published, stating that the U.S. has “defeated ISIS in Syria” which was “my only reason for being there.”

Seeing would be believing

However, there is reason to doubt these new claims that the U.S. could soon withdraw the troops that are currently stationed in the Syrian Arab Republic, in light of the fact that Trump made a similar announcement earlier this year in April. Then, just days after reports that he had instructed military leaders to withdraw from Syria “as soon as possible,” a false-flag chemical weapons attack was promptly blamed on the Syrian government despite a lack of evidence, which ultimately resulted in Trump – and his counterparts in the U.K. and France – launching 105 missiles into Syrian territory.

As some reports correctly noted at the time, feigning military withdrawal before pushing for greater conflict and military intervention is an established U.S. tactic and was detailed at length in the influential 2009 policy paper “Which Path to Persia? Options for a New American Strategy Toward Iran.” That document was published by the influential pro-intervention, neo-conservative Brookings Institution and focused on destabilizing Iran and its regional allies, including Syria.

Another reason to doubt the likelihood of the withdrawal becoming reality is the fact that neither the Pentagon nor the White House has put out an official statement on the issue and even Trump’s “confirmation” on Twitter does not amount to a confirmation of a full military withdrawal from Syria.

Indeed, in July, Trump’s National Security Adviser John Bolton stated that U.S. troops would remain in Syria until the “Iranian menace” – not ISIS — was removed from the war-torn country, a statement that later became official administration policy in September, when administration officials stated that the U.S.’ presence in Syria would be “indefinite” and aimed at containing Iran’s influence in the country. This marked a shift in the U.S.’ “official” reason for occupying Syrian territory from combating ISIS to containing Iran. The Iranian military is present in Syria at the behest of the Syrian government, and Iran has stated it will remain in the country until asked to leave by Syria, and no other entity.

Furthermore, given Israel’s influence on Trump’s Middle East policy and Israel’s push towards containing “Iranian influence” in Syria, Trump’s plan to withdraw over the alleged defeat of ISIS could well never materialize if it is opposed by Tel Aviv.

Yet, an NBC report from October claimed that the Trump administration was seeking to combat “Iranian influence” in Syria via a new policy that would “emphasize political and diplomatic efforts to force Iran out of Syria by squeezing it financially.” The report went on to note that this new strategy “would withhold reconstruction aid from areas where Iranian and Russian forces are present” and would also involve the U.S. imposing “sanctions on Russian and Iranian companies working on reconstruction in Syria.”

Thus, the announcement of a U.S. troop withdrawal from Syria may mark the beginning of the implementation of the administration’s new Syria strategy, aimed at economic and diplomatic punishment as opposed to military occupation.

Make room for the Turks

If and when the dust settles, a U.S. pullout from northeastern Syria is unlikely to translate into the return of the territory to the Syrian government, but instead the occupation of the very same territory by the Turkish military.

Late last month, Turkish President Recep Tayyip Erdoğan stated that the U.S. must choose between its relationship with Turkey or its Kurdish-dominated military proxy in Syria, the Syrian Democratic Forces (SDF), which Turkey considers to be terrorists owing to their links to the Kurdistan Workers’ Party (PKK).

Erdoğan’s ultimatum came after U.S. Secretary of Defense James Mattis announced on November 22 that the U.S. would be setting up observation posts on the Turkish-Syrian border in order to assuage Turkish concerns about the SDF. However, the move did nothing to alleviate Ankara’s concerns and instead provoked an angry response from Turkish officials, culminating in Erdoğan’s ultimatum.

Then, just last week, Erdoğan stated during a televised speech that Turkish troops would launch a military operation east of the Euphrates into the U.S.-occupied portion of Syria in order to target the SDF. Pentagon officials called the Turkish invasion plan “unacceptable” and said that it would put U.S. troops in harm’s way.

If U.S. troops do withdraw from Syria, the move would pave the way for the Turkish military to attack the SDF, which would no longer be militarily protected by the United States. This would allow Turkey to become the new occupying force in northeastern Syria, an area that contains the majority of Syria’s oil and gas potential as well as most of its freshwater and agricultural resources.

Such a pass-off between occupying powers already has a precedent in Syria. In March, the U.S. withdrew support for the SDF in the Syrian city of Afrin. Following the Turkish invasion and occupation of Afrin, Turkish media noted that Turkish operations in Syria would not be confined to Afrin, as talk of a Turkish operation targeting nearby Manbij soon proliferated.

Erdoğan has long sought to occupy Syrian territory, though his “official” reason for targeting northeastern Syrian has been the presence of U.S.-backed Kurdish separatists in the region.

However, Erdoğan has also made his ambition to “rebuild” the Ottoman Empire, which once included much of Syria’s current territory, no secret. This suggests that any large-scale Turkish occupation of Syria may instead serve Erdoğan’s expansive ambitions.

“We [Turkey] cannot be trapped inside 780,000 [square] kilometers [Turkey’s total area]. For our physical borders are different from the borders of our heart. Our brothers in Mosul, Kirkuk [in Iraq], in Al-Hasakah, Aleppo, Homs [in Syria], Misrata [in Libya], Skopje [in the Republic of Macedonia], Crimea [in the Russian Federation] and the Caucasus might be outside our physical borders, but they are all inside the borders of our heart.”

If the recent claims of an imminent U.S. troop withdrawal from Syria do materialize, it will show that the U.S. is more interested in preventing the return of the territory it is currently occupying to the Syrian government than in any commitment to the SDF, as such a move would most likely result in Turkey succeeding the U.S. as the occupying force of the resource-rich territory.