Home > Magazine > Cultures > Culture of Liberation > “We have work to do”. ‘Only in Rojava’, for the people of Rojava

“We have work to do”. ‘Only in Rojava’, for the people of Rojava

Irish poet Séamas Carraher once more puts into words, the feelings and emotions difficult to express with the articulated sound 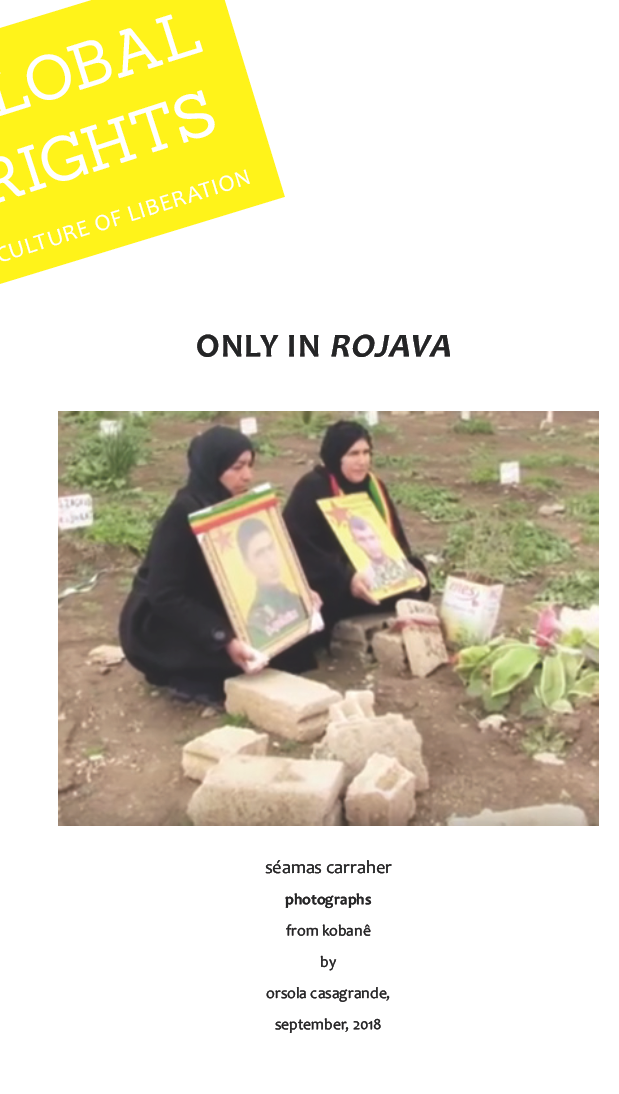 Irish poet Séamas Carraher once more puts into words, the feelings and emotions difficult to express with the articulated sound.

Yet, perhaps, words are the most powerful tool,  to fix something forever, not just on paper, but in people’s minds as well.

The old storytellers often did not leave anything written behind, yet their words penetrated into people’s minds for centuries, nesting in their memories and were passed on through the generations thus making immortal the actions of epic heroes, but also the tragedies, the wars, and the terrible plight that all living beings have suffered.

The story of the Rojava Revolution is still being written, but so many are the tales we – as well as all those who have come in contact, one way or another, with the Kurds and their struggle – must make sure are not only told but are also never lost. Because the story of these men and women belongs to us all, in a way, as these men and women are fighting right now for a better world for us all.

Séamas Carraher has the rare and precious gift to grasp the most inner voice of the people. That’s what a poet does, I suppose, or rather some poets… to listen to that distant sound most of us only dimly hear without paying much attention to it. Séamas ‘hesitates’ to face that often feeble sound, that inner voice, and amplifies it, translating it into a strong statement of the heart.

This is what Only in Rojava is, a statement from the heart.

And from the hearts of those men and women trying to build a new world, against all odds.

So he asks, What does it take to build a whole new world out of the old?

And the answer is:

Go ask the Yazidi in Sinjar.

The refugees in Shehba.

Go ask the women (those that survived)

go ask the women, those that didn’t.

Go ask Ednan in Kobanê. Heart as deep as an ocean.

Then go ask the gravestones, the quiet ones,

and the loud mouthed ones.

go ask your own dead in the waiting room

here where you are sitting

We, like all those who have come into contact with the Kurds in one way or another, for one reason or another, have work to do, as the poet reminds us:

“Here, i’m telling you, is our enormous work.

this work without end.”

…to reach a place worth building,

“a place where words can breathe again.

A place fit for humans,

for you and me, lover and beloved, democratic, federation, autonomous,

libertarian, landscape of the communes,

a manifesto for miracles!

Daybreak with no darkness.”

“Even the dust here will learn how to speak.

And these sad stones sing again one day.”

This place is Rojava, the Federation of Northern and Eastern Syria, where Kurds, together with Armenians, Yazidi, Circassians, Christians, Turkmens, Arabs, Assyrians are dreaming boldly, and, equally boldly, are trying to make these dreams come true.