Why are 162 Kurdish political prisoners on hunger strike?

Sarah Glynn, committee member of Scottish Solidarity with Kurdistan, explains the context behind a mass hunger strike in Turkish prisons 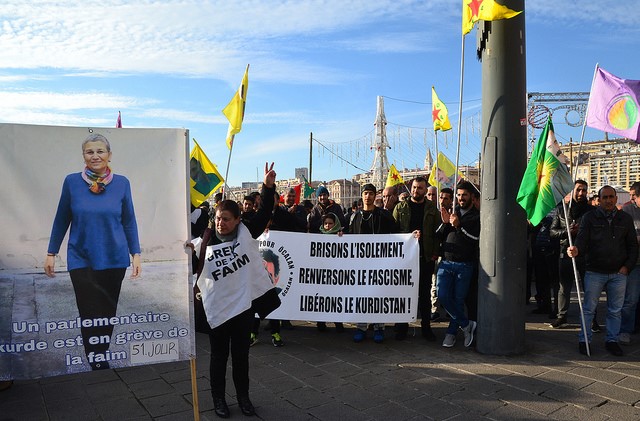 Sarah Glynn, committee member of Scottish Solidarity with Kurdistan, explains the context behind a mass hunger strike in Turkish prisons, which has spread to solidarity actions in Strasbourg and Cardiff,  of Kurdish activists.

A HUNGER strike is not a form of protest to be undertaken lightly. It is a last resort when other methods have become impossible. The fact that this has become a regular resort for Kurdish activists is an indication of the extent to which Kurds have been made to suffer.

Kurds in Turkey, where they have survived through a century of Turkish ethnic nationalism,  tie their hopes for a better future to their imprisoned leader, Abdullah Öcalan. His political ideas have inspired the grassroots, feminist, multicultural democracy that is being created in Northern Syria, and that briefly flowered in the Kurdish autonomous movements of Eastern Turkey, before being brutally crushed by the Turkish army.

Öcalan is pivotal to any hopes of a peaceful settlement between the Turkish state and its large Kurdish minority. He has led several attempts at peace negotiations, but the Turkish Government has remained resistant to concessions, and, since the last peace talks broke down in 2015, Öcalan has not been allowed any visitors, even his lawyers. The one brief exception was a visit from his brother in 2016, after a previous mass hunger strike.

The current hunger strike was begun by Leyla Güven, who has a long history of political action and spells in prison. She is currently detained awaiting trial for her criticism of Turkey’s unprovoked invasion of Afrîn, and was elected as an HDP MP while in prison.

(Over) Sixty-three days ago, she began her hunger strike to demand an end to Öcalan’s isolation, and that access be given to his lawyer and his family.

The Kurdish hunger strikers have learnt how to lengthen their protests through allowing themselves water, tea, salt, sugar, and vitamins, but Güven’s condition is now critical. During this time others have joined the protest and 162 prisoners in 36 different Turkish prisons are now on indefinite hunger strike.

The Turkish government has proved itself ready and willing to let prisoners starve themselves to death in the past, and the present Turkish regime shows no evidence of humanitarian concern, especially where the Kurds are concerned. So it has been worrying how little notice has been taken of what is happening more widely.

In an attempt to rectify this and communicate the urgency of the situation to European politicians, a group of Kurds have also gone on indefinite hunger strike in Strasbourg, where they are now (past) their 24th day without food. Other protests have been of more limited duration, though Imam Sis from Newport in Gwent has eaten nothing since 17 December, and there have been protests in Cardiff as well as in London.

With so many ready to make the ultimate sacrifice, the very least we can do is inform ourselves and others of what is happening. The hunger strikers are making a desperate bid for the cause of a peaceful settlement in Turkey. Their selfless actions could benefit us all.

CommonSpace   aims   always   to   be   an   open-source   resource   and… it is free for others to use in a responsible and appropriate manner.

In republishing you   must   credit   CommonSpace   and   include   a   weblink    – www.commonspace.scot

Building a new society against all odds: Scots activist tells of the hopes and challenges facing Kurds in Syria