Time to «Stop the War on Children» 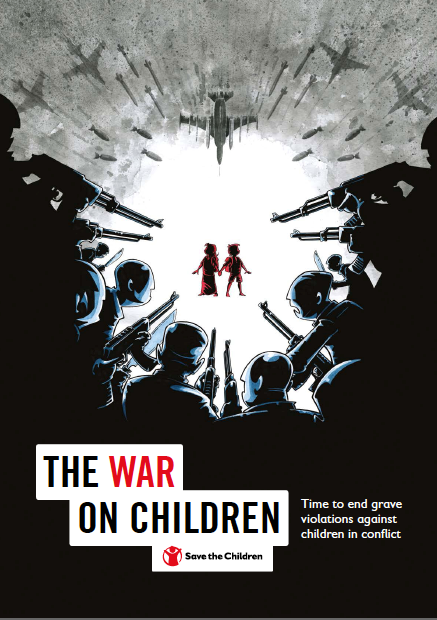 “Although all warring parties are obliged to protect children, in conflicts around the world heinous attacks are committed against children on a daily basis, for which

the perpetrators are not being held to account.” (Save the Children)

You think war was bad for you, well, think again… It’s worse for children; whether they are babies, small children or old enough to carry a gun or a knife and engage in the savagery of modern war…

So in the five years from 2013 to 2017, while an estimated 175,000 fighters were killed in the various conflicts laying waste to our miniscule planet, 870,000 children under the age of five are estimated to have been killed; (in addition data shows that, including the 175,000 combatants, around 331,000 people died on the battlefields of Afghanistan, the Central African Republic, DRC, Iraq Mali, Nigeria, Somalia, South Sudan, Syria and Yemen.) And «while imperfect» these estimates may be conservative, according to the ‘Save the Children’ organisation whose Report Stop the War on Children was released on February 14-15 to coincide with the Munich Security Conference, (February 15-17), the annual (since 1963) Cold-War-talking-shop where over 450 world leaders debate “international security”.

…Small human beings who themselves (in the children’s Forward to the study) have said:

“Before conflict, we had peace.

Before conflict, we could be children.

School was a place of learning

and development, and where our voices

The streets were full of joy and happiness,

where we walked and played.

We remember a life without conflict.

And we know a childhood in peace is possible.” (Listen to our Voices)

This new report, using UN data [United Nations Annual Reports of the Secretary General on Children and Armed Conflict (CAAC)] as well as new research by the Peace Research Institute Oslo (PRIO) paints a troubling picture of the state of the most vulnerable humans beings on our often-sad-and-disturbing-planet…

“Afghanistan, Yemen, South Sudan, the Central African Republic, the Democratic Republic of Congo (DRC), Syria, Iraq, Mali, Nigeria and Somalia are the countries where children were hardest hit by conflict in 2017.”

These children “…probably would not have died if they hadn’t been living in areas affected by conflict, Save the Children says.”

Causes of Death? “Hunger, damaged infrastructure and hospitals, a lack of access to health care and sanitation, and the denial of aid.”

There are also the deaths listed as a direct consequence of a humanitarian blockade, for example the one imposed by Saudi Arabia and the United Arab Emirates, or the reported restrictions of aid by Yemen’s rebel Houthi movement. “In the case of Yemen, as many as 85,000 children are estimated to have died from extreme hunger…” Kevin Watkins, chief executive of Save the Children UK, writes…

“Being a child in a war zone is more dangerous than being an armed combatant. Our research shows that for every soldier or militia member who loses their lives, another five children are killed.

“Most of the child deaths are a result of the malnutrition, poverty, diseases and collapse of health systems that come with wars waged in poor countries.

“Every day children face the threat of being killed or maimed, recruited by armed groups, abducted, falling victim to sexual violence, seeing their school attacked or humanitarian aid denied. In many cases, children are specifically targeted.”

Our playground has been transformed

into a dangerous place.

We hide under our kitchen table.

We hear gunshots, bombs and explosions.

We are forced to quit school

and leave our home.

Many of us have lost our parents,

We are forced to work, beg or even kill

We marry as children and give birth

We have been tortured, kidnapped,

We feel anger, resentment, and sadness.

We go to bed hungry.

Some of us never wake up.” (Listen to our Voices)

Abstract as figures and statistics are in the context of children, these facts and figures have to be mind numbing to those who value children and see respect for their rights as a norm – and not an exception?

Helle Thorning-Schmidt (Chief Executive of Save the Children International):

“Our report shows that the way today’s wars are being fought is causing more suffering for children. Almost 1 in 5 children are living in areas impacted by conflict – more than at any time in the past two decades. The number of children being killed or maimed has more than tripled, and we are seeing an alarming increase in the use of aid as a weapon of war…

“Our analysis clearly shows the situation is getting worse for children and the world is allowing this travesty to happen. Every day, children come under attack because armed groups and military forces disregard international laws and treaties. From the use of chemical weapons to rape as a weapon of war, war crimes are being committed with impunity.

Part of the reason for the increased number of children living in conflict-affected areas is that today’s conflicts are more likely to be protracted, urban and fought among civilian populations. Increasingly, international rules and norms are flouted.”

“We ask leaders to change

and hatred for love.”  (Listen to our Voices)

The report also offers a framework for “a solution” – laying out “an international plan of action, which will make a real difference for these children.”  The main areas proposed involve upholding standards of conduct in conflict, holding perpetrators to account, and investing in helping children recover from the physical and psychological wounds of war.

“This is why we are calling on all leaders to stop the war on children.” Helle Thorning-Schmidt says.

In Section 3, Page 36 of the 64 page report there are, in addition, a number  of recommendations “for governments and other influential organisations” to protect children in these conflict zones:

These recommendations are described under the four key themes:

■■ Preventing children being put at risk

…a minimum age of 18 for military recruitment

… controlling arms sales and tightening the conditions for these sales

calling for an independent body to investigate and analyse all violations of international humanitarian law and of human rights, notably children’s rights.

“Political leaders and military commanders who authorise humanitarian blockades, murder children in buses, bomb schools and fail in their duty to uphold laws protecting children should not be attending security conferences in Munich.

“They should be standing in the dock of courts, like the International Criminal Court in the Hague, and the UK should be leading the charge.” Kevin Watkins writes.

“…The suffering of millions of children should never be accepted as inevitable, and it reminds us of what is possible at this critical moment. There is still hope for children living in conflict today, but this will require concerted action from governments and non-state actors.” Helle Thorning-Schmidt

Considering the already recognised impunity encouraging the participants in this savagery as well as those who give the orders to plan and implement these armed conflicts, the aims of  those committed to ending this brutality may well need some encouragement from people?

“So, here is the question for all of us. Should we wring our hands in despair at the violence being inflicted on children? Or should we act on our common humanity and build a movement that protects children affected by conflict? Turning our backs and tolerating crimes committed against children diminishes us as an international community.”

Listen: “…the world is allowing this travesty to happen.”

Turn off the TV… put the glass down…

Time to wake up, World…

LISTEN TO OUR VOICES

“Before conflict, we had peace.

Before conflict, we could be children.

School was a place of learning

and development, and where our voices

The streets were full of joy and happiness,

where we walked and played.

We remember a life without conflict.

And we know a childhood in peace is possible.

But today we are paying the price

Our playground has been transformed

into a dangerous place.

We hide under our kitchen table.

We hear gunshots, bombs and explosions.

We are forced to quit school

and leave our home.

Many of us have lost our parents,

We are forced to work, beg or even kill

We marry as children and give birth

We have been tortured, kidnapped,

We feel anger, resentment, and sadness.

We go to bed hungry.

Some of us never wake up.

Our present and future have been put on hold.

Do not silence our words and our dreams.

Listen to what we have to say.

Listen to our opinions.

We want the war to stop

– we don’t want to hear a single shot.

Let’s make the past the bridge to our future.

We have big dreams for ourselves

We imagine our countries in peace,

where we are put at the heart of all decisions

– because we are our countries’ present and

Even during war, we dream of a country

where all children can walk safely in their

and go to a school free from violence.

A place with cinemas and parks

– and electricity, so we can watch TV.

All this should be not only in our dreams,

All this is our right.

As leaders, you have this duty to fulfil.

We call on the world’s leaders to ensure

we are able to go to school, play

and feel protected… in every circumstance.

We ask leaders to change

and hatred for love.

We ask leaders to put a smile

on every child’s face.

We ask leaders to turn to peace,

to pledge to protect us

and promise us development.

We ask leaders to offer us the opportunities

that will enable us to become

the best versions of ourselves.

Our common future is at risk.

We demand that you act now.

(This message was composed by children from Mali, Sudan, Colombia, Yemen and Syria during consultations carried out by Save the Children in January 2019 and is the Children’s Foreword to Stop the War on Children – Protecting Children in 21st Century Conflict, page 4.)