Butcher’s dozen: The crimes of Bloody Sunday 47 years on

Shock and disbelief is the reaction to the decision of the Northern Ireland Prosecution Service to charge only one British Paratrooper in connection with the murder of 14 innocent civil rights marchers on Derry’s “Bloody Sunday,” January 30, 1972 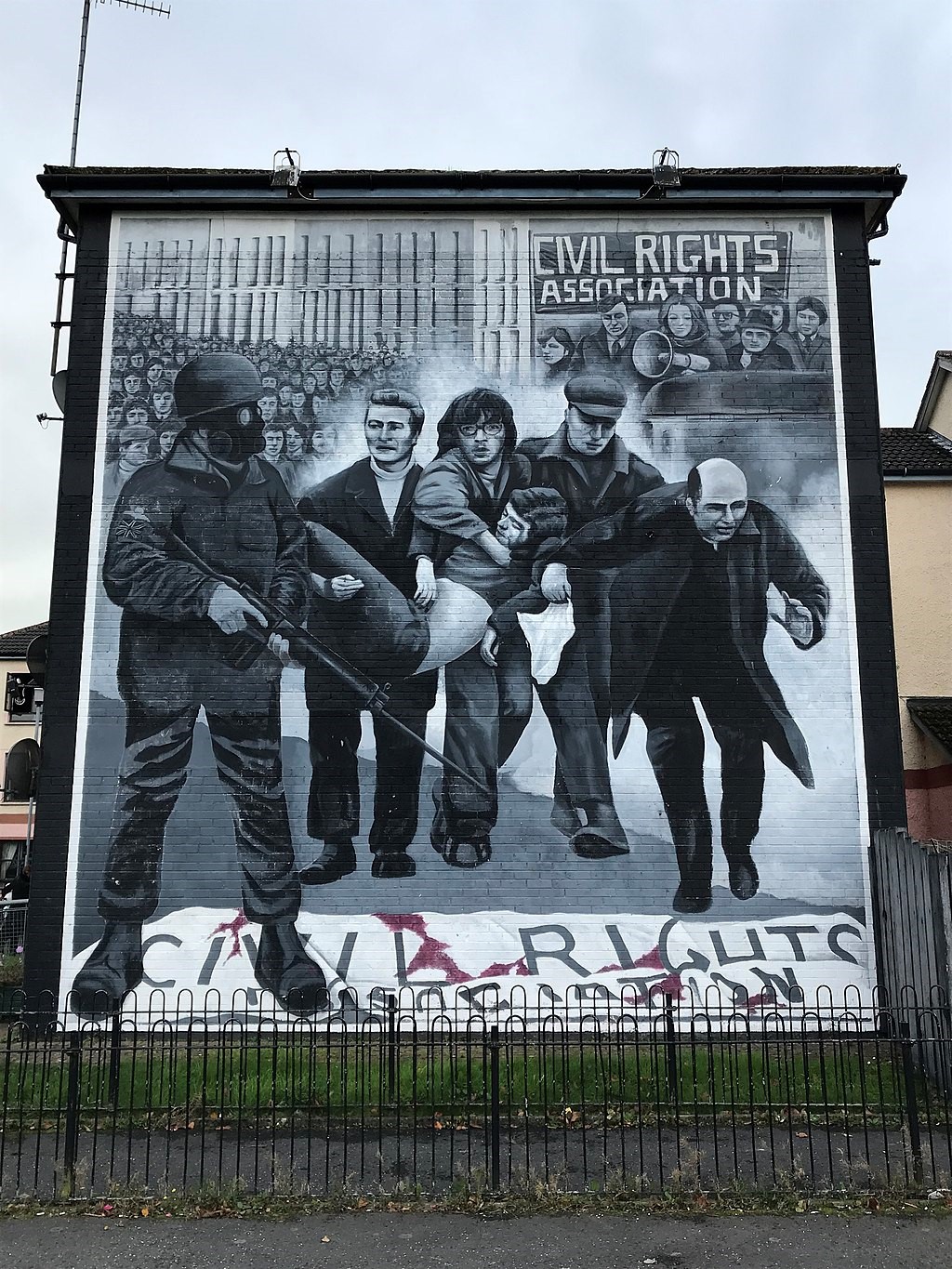 GALWAY, Ireland—Shock and disbelief is the reaction of most people in Ireland to the decision of the Northern Ireland Prosecution Service (NIPP) to charge only one British Paratrooper, “Soldier F,” in connection with the murder of 14 innocent civil rights marchers on Derry’s “Bloody Sunday,” January 30, 1972.

Relatives and friends of the Bloody Sunday victims had marched to Derry’s Guildhall in anticipation of the NIPP’s announcement.

The NIPP’s decision reflects the arrogant stance of the British establishment to these crimes committed in Ireland. Indeed, it echoes the Northern Secretary Karen Bradley’s statement earlier this month that all killings by the British army and police during the Troubles were “not crimes.”

Her statement and the legal decision to only prosecute one soldier stand in direct contradiction to the findings of the Saville Inquiry and to the apology made by former British PM David Cameron in Parliament stating the killings were “unjustified and unjustifiable.”

Lord Saville’s public inquiry into Bloody Sunday ran for over ten years. Lord Saville found those killed and injured were innocent; that the killings were unjustified and those killed posed no threat. It overturned the first discredited report into the killings, by Lord Widgery, in 1972, which said British soldiers were fired on first and some of those killed had been armed.

The Saville report, in June 2010, identified 22 former British soldiers who could be charged with murder, attempted murder, causing grievous bodily injury with intent, or perjury. It has now taken almost nine years for the NIPP to whittle that number down to one anonymous scapegoat, “Soldier F.” Saville linked him to the killing of four people on Bloody Sunday. According to the brother of victim Michael Kelly, what stood out about the evidence “Soldier F.” gave to the Inquiry was that “he showed absolutely no remorse for what he did.”

One of the solicitors for the Bloody Sunday families has praised their tenacious 47-year campaign for justice that resulted in the historic public inquiry and the prospect of actual prosecutions.

Alas, their campaign for justice is not yet over. The families will study this decision carefully and look for legal possibilities to challenge the decision before the High Court. They will seek to increase the number of soldiers prosecuted as well as ensure that the accused are named rather than remain anonymous, as was the case with the Saville Inquiry.

Bloody Sunday was a watershed in the North of Ireland conflict. It was to result in the decline of the powerful civil rights movement and the rise of the Provisional IRA. The peaceful demonstrations demanding equal rights for Catholics in the late 1960s exposed internationally the sectarian, repressive, and gerrymandered regime operating in Britain’s backyard, “Northern Ireland.”

In August 1969, the British Labour government brought British troops onto the streets to stop the pogroms against the Catholic community by the armed sectarian pro-British Northern Ireland police force, the RUC.

The British Labour government disarmed the RUC and began to introduce democratic reforms. However, in June 1970 the role of the British state changed when Edward Heath was elected Prime Minister. The Tories—or to give the official title, the “Conservative and Unionist Party”—were in power and they sympathized with their fraternal party in the North of Ireland, the Unionist Party, that had controlled the sectarian state for almost 50 years.

Repression of the Catholic community rather than democratic reforms became the order of the day culminating in internment without trial in August 1971.

The demonstration in Derry on January 30, 1972, had been aimed against internment. The killings on Bloody Sunday were seen as a deliberate act by the British Tories and their Unionist allies to force the unmanageable peaceful protests for civil rights off the streets. Both at home and abroad it was more acceptable to fight “terrorism” than to deal with peaceful demonstrators demanding their civil rights. Besides, in N. Ireland the British army could perfect its anti-insurgency techniques.

So while only one of the soldiers who fired the shots is to be prosecuted, the politicians, civil servants, and officers who pulled the strings are not. Of late, particular attention has been drawn to retired General Sir Mike Jackson. He was second-in-command of the army in Derry on Bloody Sunday. During his evidence at the Saville Inquiry, he suffered from severe memory loss.

This contrasts with his disputed account of another mass killing in Northern Ireland months before Bloody Sunday. In August 1971, during internment, the Parachute Regiment shot dead 11 innocent people including a mother and a priest in what is now known as the “Ballymurphy Massacre.” Jackson was press officer for the Parachute Regiment stationed in Belfast and briefed the media that those killed in the shootings were Republican gunmen. This view was contradicted recently at the ongoing inquest into the Ballymurphy Massacre, when the then-commanding officer of the Parachute Regiment, Gen, Sir Geoffrey Howlett, 89, admitted that of those killed “most if not all were not IRA.”

Jackson’s role in Northern Ireland did not hamper his career, which saw him involved in the wars in Yugoslavia and Kosovo. On February 1, 2003, he became chief of staff of the British Army, a month before the illegal invasion of Iraq—another war where those who pulled the strings go completely unpunished.

Irish poet Thomas Kinsella’s poem “Butcher’s Dozen” was written in the immediate aftermath of Bloody Sunday, following the Widgery report which whitewashed the atrocities, and published on April 26, 1972.

Kinsella later said: “The Widgery report was a great insult. [My] response was instant; the poem itself was written and issued in seven days. … I debated with myself at the time whether to keep it anonymous, but that would have been wrong. Commitment is important when faced with wickedness and injustice. … The poem was at some personal cost, however. There was a considerable loss of readership—a permanent chill in the atmosphere from readers of my work, and from friends. I received a letter from one friend who simply put an end to our friendship. They signed off, ‘No British person would behave in such a way.’ This continued even after total vindication [in] the Saville report; and the apology [from prime minister David Cameron] in the British parliament. I stand over my decision to write [it].”

The poem opens in tone and rhythm reminiscent of Shelley’s “The Mask of Anarchy,” written after the Peterloo Massacre in 1819:

I went with Anger at my heel
Through Bogside of the bitter zeal
—Jesus pity!—on a day
Of cold and drizzle and decay.
A month had passed. Yet there remained
A murder smell that stung and stained.
On flats and alleys—over all—
It hung; on battered roof and wall,
On wreck and rubbish scattered thick,
On sullen steps and pitted brick.
And when I came where thirteen died
It shrivelled up my heart. I sighed
And looked about that brutal place
Of rage and terror and disgrace.
Then my moistened lips grew dry.
I had heard an answering sigh!
There in a ghostly pool of blood
A crumpled phantom hugged the mud:
“Once there lived a hooligan.
A pig came up, and away he ran.
Here lies one in blood and bones,
Who lost his life for throwing stones.”

It continues, commenting on British justice:

“The shame is theirs, in word and deed,
Who prate of justice, practice greed,
And act in ignorant fury—then,
Officers and gentlemen,
Send to their Courts for the Most High
To tell us did we really die!
Does it need recourse to law
To tell ten thousand what they saw?
Law that lets them, caught red-handed,
Halt the game and leave it stranded,
Summon up a sworn inquiry
And dump their conscience in the diary.
During which hiatus, should
Their legal basis vanish, good,
The thing is rapidly arranged:
Where’s the law that can’t be changed?
The news is out. The troops were kind.
Impartial justice has to find
We’d be alive and well today
If we had let them have their way.
Yet England, even as you lie,
You give the facts that you deny.
Spread the lie with all your power
—All that’s left; it’s turning sour.

As various ghosts of the dead speak, one refers to the witches’ broth in Macbeth, only this pot is worse!

A joking spectre followed him:
“Take a bunch of stunted shoots,
A tangle of transplanted roots,
Ropes and rifles, feathered nests,
Some dried colonial interests,
A hard unnatural union grown
In a bed of blood and bone,
Tongue of serpent, gut of hog
Spiced with spleen of underdog.
Stir in, with oaths of loyalty,
Sectarian supremacy,
And heat, to make a proper botch,
In a bouillon of bitter Scotch.
Last, the choice ingredient: you.
Now, to crown your Irish stew,
Boil it over, make a mess.
A most imperial success!”

Kinsella’s concluding lines will stand for the way many in Ireland feel today:

I stood like a ghost. My fingers strayed
Along the fatal barricade.
The gentle rainfall drifting down
Over Colmcille’s town
Could not refresh, only distil
In silent grief from hill to hill.