President of Colombia Iván Duque, fails to comply with the Peace Agreement endorsed by the Congress of the Republic in its second modified version after its rejection in the plebiscite 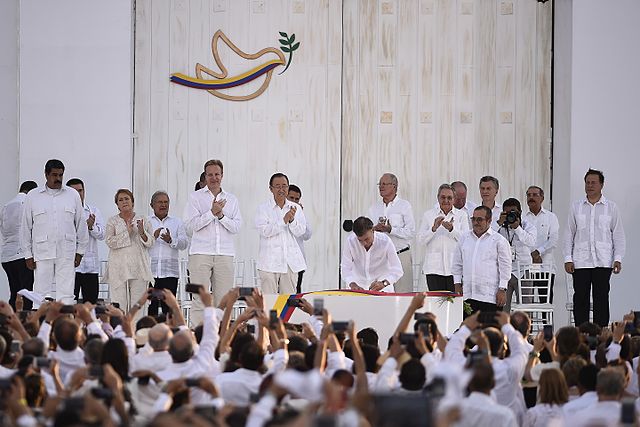 Peace is an unavailable and against majority right according to Professor Ferrajoli. Its safeguard, content and maintenance is mandatory compliance, as it does not depend on government opinions or political decisions. The 6 presidential objections to the Statutory Law are political objections that lack any legal support. So evident is this that all of them have been dismissed by the Constitutional Court when it pronounced itself on the Legislative Act 001 of 2017 that established the JEP and on the Statute Law of the JEP now boycotted by the Executive. It is not a matter of dismantling the inconsistent arguments that Álvaro Uribe has sent to Duque ordering him to object to the Law, as they all of them inconsistent and arbitrary as the Constitutional Court declared in its day. Now is the time to emphasize that with these objections the Democratic Center and its allies give a further step, perhaps the final, towards the shattering of the peace agreement as stated by Londoño in the last congress of the party that has put him in charge at the Nariño Palace.

President Duque and his boss Alvaro Uribe must be aware that with this decision stabbing the Peace Agreement in the heart, Colombia becomes a pariah country before the International Community, a country with no word or seriousness that ostentatiously violates its obligations and in which no one could trust except to use it as a pawn that puts the dead in foreign militarist adventures. And all this to defend the interests and impunity of the powerful clients of the firm “Martínez Neira Lawyers” or of Álvaro Uribe, who tremble with fear at the prospect of having to face, for the first time, their many responsibilities in the bloody armed conflict.

Colombia should know that these objections are not in defense of the victims, who were never compensated by the State except for very few exceptions and that were never a concern neither of the Democratic Center nor of Álvaro Uribe. Nor are they in defense of the public force, whose members have been defending the JEP and demanding responsibility from politicians who gave them terrible orders. The presidential objections are the same ones recalcitrantly demanded by the Martínez Neira-DEA-Álvaro Uribe consortium to end the JEP and the Peace Agreement, despite the contrary opinion of the Constitutional Court. The irresponsible attitude of the perfidious consortium has been revealed by the intense campaign of manipulation, destabilization and discrediting orchestrated in recent weeks against the Jurisdiction for Peace. The chronicle of these announced objections has been financed with funds for covert operations of the Attorney General’s Office and the DEA, as has been publicly acknowledged in the press. How much panic unleashed before Truth!

The political party FARC will immediately request the political intervention of the International Community and the Security Council of the United Nations in accordance with the mechanisms provided for in the Peace Agreement, in order to prevent the peace built with so many efforts from being destroyed by those who have always used war for their profit. We will also ask the International Criminal Court to reinforce its observation and intervention mechanisms in Colombia to prevent the impunity, that the Democratic Center has always imposed, from reigning again.

We call on Colombian society to defend the Peace Agreement and the Integral System of Truth, Justice, Reparation and Guarantees of Non-Repetition.