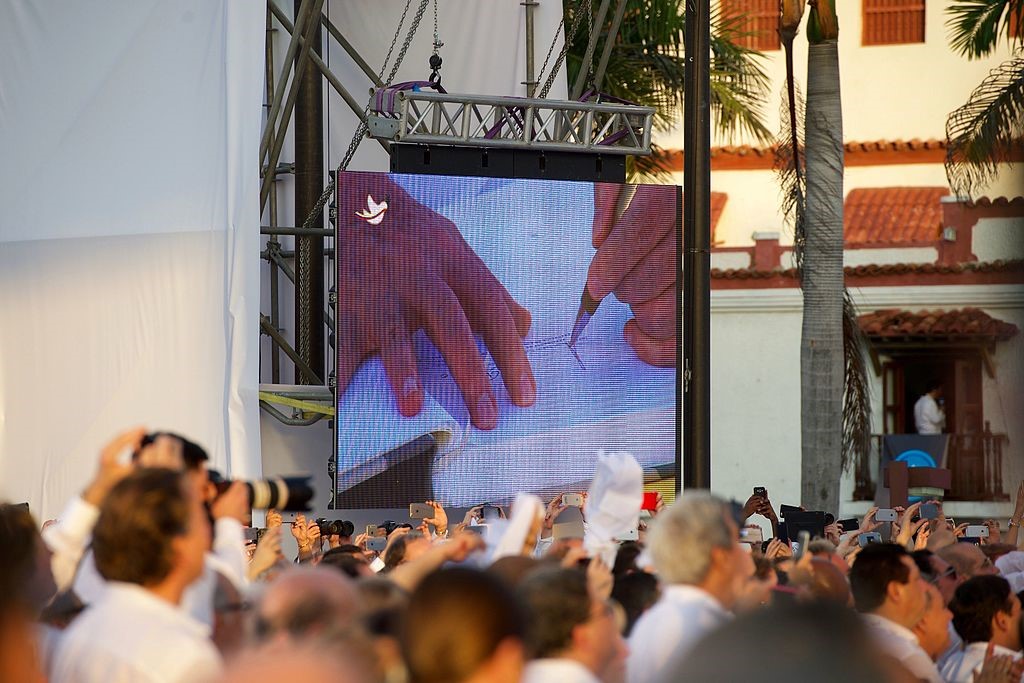 On April 5, a group of around 20 Colombian activist collectives delivered a formal request to the International Criminal Court (ICC) for it open a criminal investigation about the mass killings of social leaders in their country.

The collectives and their supporters delivered the letter in person at The Hague after marching for over a week from Paris, while stopping in different cities in France and Belgium along the way where they’ve staged rallies and performances.

The quote below is from the kick-off gathering in Paris:

A homage to the 472 social leaders assassinated in Colombia, the walkers of The Hague made a piece of fabric with the names of [each of] the 472 [leaders]. We hope the government has enough with their security policies and this number doesn’t continue swelling.

The march was spearheaded by The Netherlands’ Colombian Citizens Diplomacy Collective with other groups joining forces later on.

Colombian politicians Gustavo Bolívar and Antonio Sanguino have expressed support for the march. Senator Gustavo Petro, who lost presidential elections in 2010 and 2018, also participated in the march through his organization “Colombia Humana” (Human Colombia).

A video (below) by Adriaan Alsema, the founder of online media outlet Colombia Reports, shows some images of previous protests that were staged inside and outside Colombia against the killings of social leaders. It also includes a brief explanation of the problem.

Over 163 community leaders and activists — referred under the umbrella term líderes sociales in Colombia — have been murdered over the past three years in Colombia, according to the UN’s High Commissioner for Human Rights.The Colombian Ombudsman has a much higher figure — over 460 killings since 2016.

By any accounts, the number of violent deaths has soared since the 2016 peace agreement that for the most part ended the country’s decades-long conflict between the government and the guerrilla group FARC.

Among many other directives, the peace agreement stipulates that the FARC will surrender all assets in exchange for participation in institutional politics.

But the FARC has left a vacuum of power since it left its former territories, which have now been occupied either by paramilitary groups or guerrilla dissidents that don’t accept the peace process.

Social leaders are targeted for defending their communities from such groups, who usually run a monopoly on illegal drug trade or illegal mining on the areas they control.

According to Carlos Guevara, who coordinates the organization “Somos Defensores” (we are defenders, in Spanish), the social leaders are often killed in their own homes, in front of their families, and usually have no support from authorities when they seek justice:

Aggressions against people devoted to defend human rights in Colombia [has reached the level of] a humanitarian crisis […] they’re being killed because they’re pushing to move away from an economy deemed illegal and beneficial to drug traffickers and armed groups. The Government is not taking action to protect these leaders…

Meanwhile, The National Conference of Afrocolombian Organizations highlights an important aspect of the mass killings that tends to be set aside: the fact that most social leaders belong to ethnic minorities.

In addition, female leaders suffer from an additional layer of violence, as they are subjected to additional kinds of gender-based aggressions.

Colombia Twitter often uses the hashtag #NosEstánMatando (they’re killing us) to talk about the killings of social leaders. With the ICC march, activists hope to raise the international profile of their plight.

Meanwhile, the numbers don’t cease to soar. Since the start of 2019, 73 social leaders have been threatened just in the central Boyacá department.

Colombian President Juan Manuel Santos writes his name as he joins FARC leader Timoleón Jiménez in signing a peace accord as U.S. Secretary of State John Kerry sits in a plaza outside the Cartagena Indias Convention Center in Cartagena, Colombia, on September 26, 2016, while attending a peace ceremony between the government and the Revolutionary Armed Forces of Colombia (FARC) that ended a five-decade conflict. By U.S. Department of State from United States [Public domain]