I joined the YPJ in March of last year. I wanted to support the revolution and fight and join also the weaponised fight against the forces of fascism and the enemies of the revolution 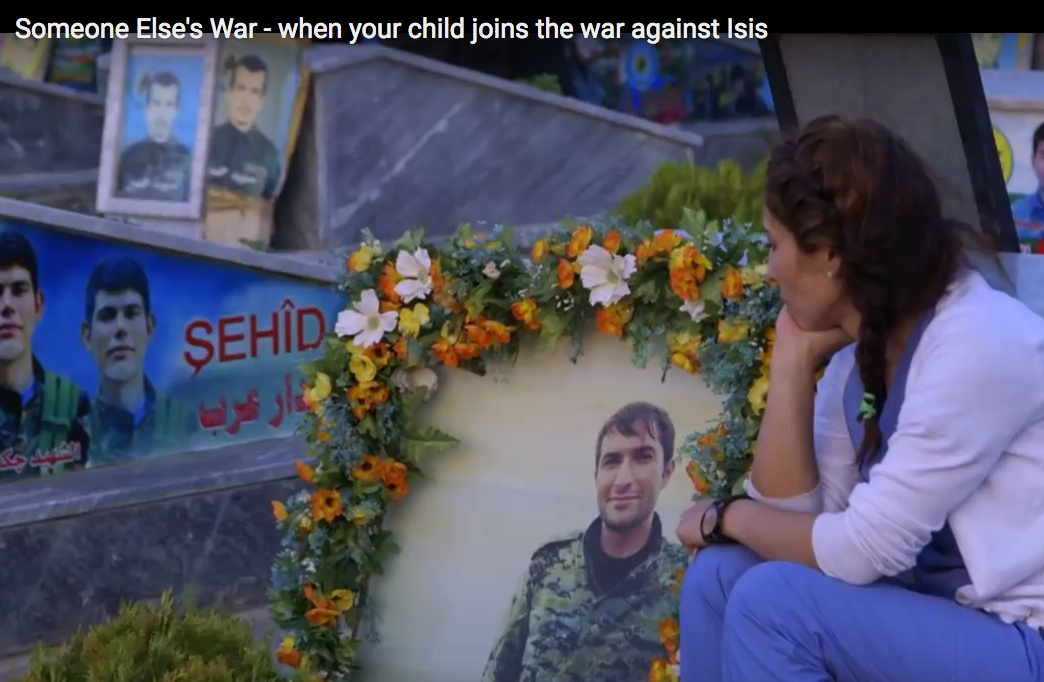 “My name (Helîn Qerecox, my name from before was Anna Campbell… I joined the YPJ in March of last year. I wanted to support the revolution and fight and join also the weaponised fight against the forces of fascism and the enemies of the revolution…”

A short film (28’42”), comprised of interviews with the families of three English volunteers in the International Freedom  Battalion  fighting ISIS/Daesh in Syria, the most famous, currently, being Anna Campbell (Helîn Qerecox) from Lewes, East Sussex, who volunteered with the US-backed Kurdish Women’s Protection Units (YPJ) – the all-female affiliate army of the People’s Protection Units (YPG) – and was killed in the besieged city of Afrin when the convoy she was travelling in was struck by a Turkish missile on March 16 last year.

Commissioned by the Guardian newspaper and looking at the experience of these revolutionaries’ families, both in their home places and in Syria, it would have been better if these young volunteers had managed to survive the deadly conflict and talked themselves of the why and the lessons to be learned in engaging in armed struggle on behalf of the Kurdish revolution in north and eastern Syria and against the fundamentalists of ISIS/Daesh…

The sadness of loss maybe here meeting the often grim dreams of revolutionary justice and radical equality all filtered through your average English family?

Sad too that in this globalised world the message of the disastrous contradictions currently existing between people and places can hardly be filtered through a few righteous individuals while those that maintain their grip on power (and resources) only continue to add to the suffering with their endless talking of democracy and rights while behind the scenes the real business goes on, whether it is selling the arms that fuels these conflicts or laying the seeds in the first place (the Middle East at the height of British and French domination being the example here) and watering them as much now, in our globalised world, as in the days of empire and colonialism.

Of the short film Suprfolk films, the producers, say:

“We are really excited to share with you a film we have made in partnership with the Guardian.

It’s called Someone Else’s War and its a story about a group of ordinary young Brits who died in Syria fighting against Isis, told through the eyes of the parents they left behind. The film deals with big questions about why they decided to leave their comfortable British homes to join the front line and ultimately whether what they did was right or wrong. Are they martyrs, freedom fighters or are they terrorists? With Isis territory reduced to a small enclave the parents travel to Syria to retrace their children’s footsteps and attempt to understand the choices they made.

It has been a challenging filmmaking experience for all the obvious reasons, but in the process we have met some wonderful people.

Please do have a watch and if you like the film, shout about it from the rooftops!”

“To date at least 20 British nationals, some with no previous experience of combat, have travelled to Syria to fight Isis on the frontline. Eight of these Brits have lost their lives. This film follows the journeys of parents as they investigate why their children went out to join the Kurdish army in their fight against Isis, including visiting the places they died in Syria. What led these young Brits to risk everything, travelling thousands of miles from home to wage war against the world’s most feared terrorist organisation, fighting someone else’s war?”

“Now this is the crater that was formed when it (tank detonated by volunteer Kosta shortly before his death)  blew up… and it stopped Daesh…and then they got their village back..20 families living here…Arab families…So it has got to be worth it, hasn’t it?” Chris Scurfield, father of Kosta, in Syria.

In 2018, the filmmakers tells, a decision was made by the conservative British government “to charge returning British fighters under the terrorism Act”…

Welcome to the 21st century. Good. Bad. But never indifferent.

The Fallen Heroes of the Rojava Revolution