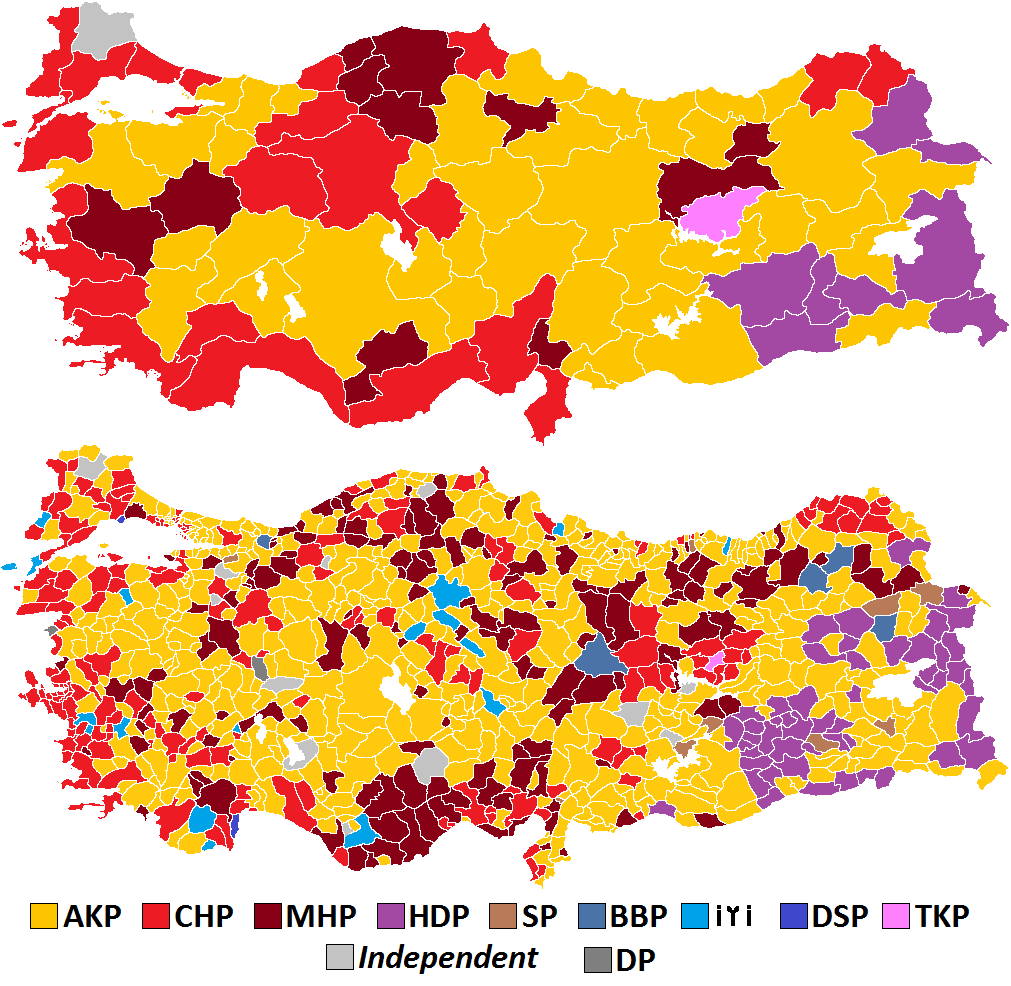 An American historian, Hayden White, once achieved fame by claiming that historical accounts were essentially like novels, each with their own plot and structure. Whatever we think about White’s post-modern move, histories of early 21st-century Turkey are sure to read like thrillers with many ups and downs.

Turkey’s local elections on March 31 added a new page to this dramatic tale. Reuters correspondent Humerya Pamuk spoke for many when she called the polls “nothing short of historic”.

Against expectations, President Recep Tayyip Erdogan’s ruling Justice and Development Party (AKP) lost in five of the six biggest cities in the country, including the country’s capital Ankara and its biggest city Istanbul, which had been run by right-wing Islamist parties since 1994. Erdogan started his political life as a mayor of Istanbul.

The mayor-cum-president had left nothing to chance in these elections. All the country’s democratic and civic institutions — from an impartial judiciary to its newspapers and universities — have been battered by the ruling party.

The president put his all into the campaign, criss-crossing the country from west to east. He hoped to retain cities like Istanbul and Ankara and fantasised about opening new territory, such as Izmir, the metropolis of Turkey’s western Aegean coast, where prominent former economy minister Nihat Zeybekci ran as a candidate. Izmir has long been a stronghold of the opposition Republican People’s Party (CHP).

The AKP also unleashed a barrage of oppression on the Kurdish-originated, left-wing Peoples’ Democratic Party (HDP) whose iconic leader Selahattin Demirtas remains in jail, along with 700 prominent political allies.

One suspects that Erdogan counted on an even bigger ally: a lack of hope among his opponents that anything meaningful could be done in the ballot box to defeat an obdurate ruling party that has survived 13 elections and a major coup attempt.

Visiting Turkey in the last couple of years, one could be overcome with an overwhelming sense of cynicism among many who thought Turkish democracy had been finished off for good.

A coup attempt in July 2016 allowed Erdogan to introduce emergency rule. This was followed by a 2017 referendum that created an imperial presidency and a 2018 election where Erdogan won the presidency.

What hope could remain of using the ballot box, when the political space seemed to close?

This is a time when thousands of Turkish academics have been criminalised, with many forced to leave their posts and even the country. It is when the newspaper Hurriyet, a long-time voice of liberal opposition to Erdogan, was successfully bought out by pro-government business figures. It is when Turkish Radio and Television (TRT), the supposedly impartial national broadcaster, gave 53 hours air time to the AKP-led alliance and only six hours to the opposition in the last elections (it gave seven minutes to HDP — not airing its views but propaganda against it!). It is a time when the practice of key ministers resigning from their posts during the electoral process has been discontinued. It is a time when about 100 HDP mayors have been forced out of their jobs, with their cities being taken over and run by state-imposed bureaucrats.

However, despite all these setbacks, Turkey has retained its basic representative institutions.

In other words, the ruling party hesitated from going “all the way” to making the country a one-party authoritarian state and more akin to the vast majority of its neighbors in the beleaguered region. This is the greatest single wonder of March 31.

This resilience was not achieved by institutional design, or Erdogan’s benevolence. It was achieved by two major factors: first, the Turkish people did not let the cynicism of some of the intellectual elite take over; they didn’t give up on the ballot box and flocked to the polls. Secondly, the opposition political parties put up a strong fight. This is especially remarkable in case of the HDP, which did not let the familiar judicial and military oppression make it lose hope. The party contested the elections with the Kurdish slogan “Ya me Ye,” meaning “It is ours” to declare its intention to take back the municipalities wrested from it.

The HDP also made a historic decision to support CHP candidates in Istanbul and Ankara, therefore ensuring the victory of the anti-Erdogan vote.

The AKP’s right-wing ally, the Nationalist Movement Party (MHP) won 7.31%, a decrease of more than 10 points, due to an anti-Erdogan split that led to the formation of the Good Party (IYI), that became an ally of the CHP in the elections. IYI won 7.45%, in addition to CHP’s 30.11%.

Erdogan still controls the imperial presidency and wields a comfortable majority in the parliament. The country will not face elections again until 2023.

If the show of democratic resilience is to be continued to an actual opposition victory only a major strategy, involving an HDP-CHP alliance, offers a meaningful program of political and economic transformation.

This sounds like mission impossible at first glance. How can a party of Kurdish liberation ally itself with a party whose historical figure, Kemal Ataturk, started the marginalisation and (at times) outright massacre of the Kurds?

To answer this question, we must first shed light on the broader dynamics of Turkish politics.

The real political division in Turkey is often described as “Islamist versus secularist”, represented by the AKP and CHP respectively, with the Kurds supposedly representing a third pole. However, this schema obscures the dynamics of Turkish politics and history.

The AKP, like its previous incarnations in the 20th century, is framed by both Islamism and its firm stand on the political right, defined by free-market policies and Cold War-era anti-communism.

The CHP on the other hand, has a leftist and social democratic tradition and continues to agitate among its supporters in opposition to the ruling party’s authoritarian, right-wing Islamism.

As Rosa Burc wrote in Jacobin on March 3, it is misleading to reduce HDP to a “Kurdish” party. The HDP stands for a leftist democratic alternative, known as much by its advocacy of local autonomy as its championing of feminism.

Leyla Zana, remembered as the first Kurdish woman elected to the Turkish parliament, was elected on the Social Democratic People’s Party (SHP) ticket in 1991. SHP was a party from the CHP family and later joined it. Zana’s historic oath is usually remembered because she gave it in Kurdish, however her words were: “I take this oath for the brotherhood between the Turkish and Kurdish people”.

Another moment of hope for Turkish-Kurdish leftist unity came at the June 2015 elections.

For the first time ever, the AKP lost its majority. The HDP won its traditional stronghold in the Kurdish south east, plus a total of 80 seats across the country, including in western cities such as Izmir. Many traditionally Kemalist families strategically divided their votes between the CHP and HDP to make sure the latter passed the electoral threshold.

Erdogan’s string of successes is always reduced to his Islamism in dominant media narratives. However robust economic growth under his rule does much more to explain it. The current rise of unemployment, inflation and recession similarly explains his defeats in urban areas. This offers an excellent opportunity for a left alternative.

The March 31 elections reminded us of what a CHP-HDP alliance could do, and the strength of the Turkish far-left.

The Communist Party (TKP) won a provincial capital, Tunceli, for the first-time. One is reminded of the united resistance shown in the 2013 Gezi Park protests when thousands rose up against Erdogan and against the impact of capitalist rule on the country.

The question facing the opposition is now stark: can the sons and daughters of Kemal Ataturk and Abdullah Ocalan, the historic leader of the Kurdish movement, put aside their differences and unite under the banner of united democratic socialist struggle?

Can the CHP cadre remember the historic days of the late 1970s, when their party rallies filled stadiums with the Internationale in the air and Bulent Ecevit promised democratic socialism?

Can it continue hopeful signs like that of Istanbul’s new mayor, promising to respect “our Kurdish citizens” and urging party members shouting Kemalist slogans to “be careful with your words, your attitude and your actions,” and his promise to “heal the wounds”?

Acknowledging his defeat, Erdogan said: “People who come up with false promises, go ahead. We will see how they will rule, we will continue on our path, God willing — by taking lessons from our mistakes in this election.”

If the opposition also learns the necessary lessons, Turkey can begin to democratically take down an authoritarian leader and open a historic new chapter in its wondrous life.