//
séamas carraher, global rights
/
ON A DAY THIS WEEK

May 10, marks the anniversary of the assassination and death of the Salvadorian poet and revolutionary Roque Dalton 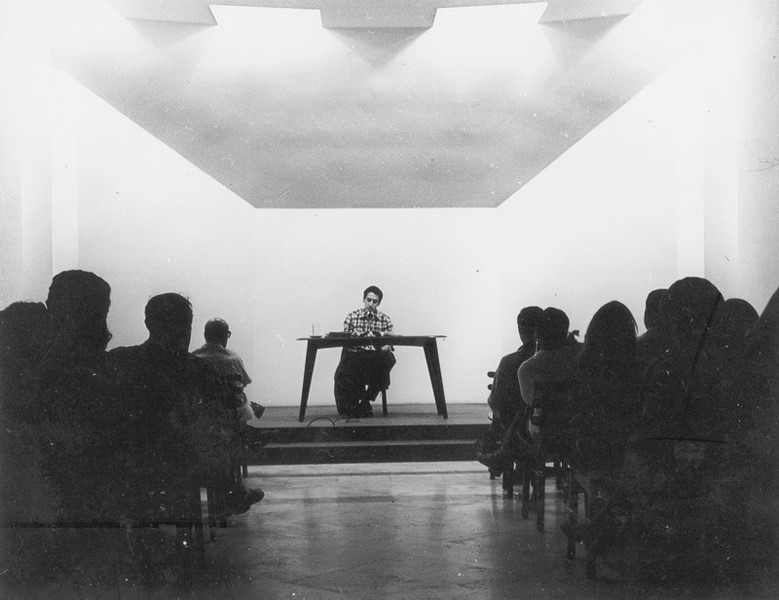 May 10, marks the anniversary of the assassination and death of the Salvadorian poet and revolutionary Roque Dalton, the poet who wrote:

Those who widened the Canal of Panama

(and were classified as “silver roll,” not “golden roll,”)

those who repaired the Pacific fleet

in the bases of California,

who rotted in the prisons of Guatemala,

As thieves, smugglers, and blackmailers

Those suspected of everything

(permit me to turn over the accused

as a suspicious beggar

with the aggravation of being Salvadorean),

those who filled the nightclubs and bars

in all the ports and capitals of the region

the farmers of corn in the middle of a foreign forest

the kings of the red page

those whom no one knows where they are

the best artisans in the world

those who were cooked with gunshots while crossing the border,

those who died of malaria

or the stings of scorpions or the yellow barb

in the furnace of banana plantations,

those who cried out drunk the national anthem

the crowd, the beggars, the addicts,

Those who could just barely come back,

Those who had a bit more luck,

The first to take out a knife

The saddest sad people in the world,

You can listen to this poem, put to music here (El Salvador Compatriotas) and here (interpretado por Guilleromo Cuellar)…

If we do not remember our dead, in particular the dead who offered their lives to help open a door to the future for all those – “the saddest sad people in the world” – in need, what chance do we have of greeting or meeting that future with a human face we need so badly..?

Since Global Rights commemorated the poet’s unjust and untimely death at the hands of his own ‘comrades’ two years ago, the struggle by Dalton’s family, both to discover his body as well as having the details of his assassination brought to the light of day, has been ongoing.

In July 2018 they received some encouragement when the “Supreme Court of Justice in El Salvador… accepted a petition to re-open the murder case of poet Roque Dalton, who was killed in 1975 by his own partners in the Revolutionary People’s Army (EPR), accused of being a revisionist, a Cuban agent and collaborating with the CIA…”

Last July Telesur, (the “Latin American CNN”, launched in 2005, under the government of Hugo Chavez, and headquartered in a Venezuela currently under siege) informed the world that El Salvador’s Supreme Court had reopened the case after 43 years.

“The court accepted a habeas corpus request and ruled that the country’s prosecuting office had failed to investigate the kidnapping and murder of Dalton. Now, 43 years later, the case will be finally investigated.

“‘We still don’t know where his remains are so, for me, for my family and for my dad’s closest friends, this is incredibly painful because it hasn’t ended. My dad is not in peace and neither are we!” said Jorge, the youngest son of the Salvadoran poet…’”

If Roque Dalton’s burial place remains a mystery the bitter cause of his death has not.

“Things came to a head early in 1975. Rivas Mira began to centralise the ERP’s command structure, converting the National Directorate into a militarised General Staff, and concentrating the group’s resources in his own hands. On 13 April, according to a communiqué released by the RN a year later, the General Staff ordered Dalton’s arrest and that of another militant called Armando Arteaga, charging them with insubordination. ‘It was a coup d’état,’ Sancho told me when I spoke to him last summer. The next day, a hastily organised ‘war council’ recommended that Dalton and Arteaga be executed. But not everyone was convinced, and a few days later the leadership added that Dalton was a Cuban spy. (Rivas Mira was repositioning himself as a Maoist, and hence as anti-Soviet and anti-Castro.) When that failed to work, they added one last charge: that Dalton was an agent of the CIA. On 1 May, the RN withdrew from the ERP. The war council assigned cadres to find and kill them. Most of these attempted assassinations failed, but hostilities between the groups continued for weeks until Carpio’s group, the FPL, demanded that they cease. By then, Dalton and Arteaga were dead. Their bodies have never been found.” Ben Ehrenreich wrote in the London Review of Books back in 2010.

So, for years the alleged murderers have been named without any action being taken against them, these also include Joaquin Villalobos and Jorge Melendez …Villalobos, at that time one of the leaders of the EPR, eventually admitted his responsibility to the murder in different interviews.

“‘I was one of the seven members of the tribunal that ordered his execution,’ admitted Villalobos during an interview with Dalton’s son Juan Jose that was published in the Mexican newspaper Excelsior in 1993. ‘It was an act of ideological radicalization, and passionate and personal immaturity. Dalton was the victim of ignorance, intrigue and dogmatism. It was a grave error.’ Telesur quotes..

“And according to an interview with one of EPR’s members, Porfirio Hernandez, Villalobos himself was allegedly the one who pulled the trigger.”

Jorge Meléndez, who would later become the head of the country’s civil protection agency in the El Salvador government (Presidential Secretary of Vulnerability Affairs and General Director Civil Protection System, Republic of El Salvador), has always refused to concede “even that a crime was committed.” (Toronto Star)

“‘Gentlemen, I am not a murderer of Roque Dalton, I belonged to the organization whose rules were set by the management, among them Roque Dalton,’” Meléndez said in an interview with Radio Sonora in 2018 at the time the Supreme Court of Justice accepted the petition to re-open the murder case. (El Salvador Times)

El Salvador Will Be (Translated by Zoë Anglesey)

El Salvador will be a beautiful

and without exception, a dignified country

when the working class and the people of the countryside

enrich it, bathe, powder and groom it,

when they cure the historical hangover

and add enough to it by a hundred fold

and start it moving along.

The problem is that today El Salvador

A few machetes will be given it

bathrooms with toilets and toilets with seats,

Juan Jose Dalton,  Roque Dalton’s son, has been documenting the case in search of justice:

“‘There are witnesses still alive, they have provided more information to statements we already had from those involved: Joaquin Villalobos and Jorge Melendez. We also have the documents they published after my father’s murder. We want to know if they are responsible or not, and if they are, we want them to face justice,” said Juan Jose.’”

“A few years ago, my brother, the renowned Cuban novelist Eliseo Alberto Diego (popularly known as “Lichi”), wrote the following about the case:

‘The coup de grace was aimed directly at Roque Dalton’s forehead, that afternoon at the court of blood-thirsty guerrillas that sentenced him to be executed by young men who, not knowing how to read, had learned his verses by memory.

‘The slim body of the great Salvadorian poet was buried somewhere in the jungle, under two inches of wet soil. His murderers now acknowledge this was a mistake, that they did not have more time to bury him in the depths of the planet.

‘Wretched are the guerillas who did not die in combat, for the mischievous ghost of Roque Dalton will haunt them to the end of days, until they are withered old men, scorned by their children. Like my father said of those who killed Federico Garcia Lorca: may God forgive them. I can’t.’

“My family has no choice but to continue searching for the truth and for justice. Faced with our government’s refusal to clarify any of the facts, we have taken steps at the international level, before institutions such as the Inter-American Human Rights Court, and we are going to approach other entities, even Pope Francisco himself, if needed.”

“The FMLN is most responsible for trampling all over and insulting the memory and legacy of my father, poet Roque Dalton, in the vilest of ways, by choosing and protecting one of his killers, but today punishment has befallen them. Not only did they want to stain my father’s name, they didn’t want to collaborate in the search for his corpse, walking all over my mother and my family.”

Jorge Dalton also writes of the crisis now facing the Left after a century of struggle, success and failure, and ultimately its inability to transform a world of inequality, darkness and oppression that it was so good at criticising:

“Lastly, my dear friends and family, I believe in the future and, as a result, in our new generations. We can’t return to the FMLN, because going back to them means going back to the past and failure. In my eyes, the future belongs entirely to our youth.”  (El Salvador’s Elections and the Fall of the FMLN)

of things, the sky-

And my blood boils up

and I laugh through eyes

that have known the buds of tears.

I believe the world is beautiful

And that my veins don’t end in me

but in the unanimous blood

of those who struggle for life,

the poetry of everyone.

Eduardo Galeano, in his book ‘Children of the Days’, wrote the entry for Roque Dalton for May 10:

“The poet Roque Dalton wielded a defiant wit, he never learned to shut up or take orders, and he laughed and loved fearlessly.

On the eve of this day in the year 1975, his fellow guerrillas in El Salvador shot him dead while he slept.

On a day this week, May 10, 1975, Roque Dalton, poet and revolutionary – with a vision of this future we are finding it increasingly impossible to find the door to – was shot dead in a house in the Santa Anita neighbourhood in San Salvador city by Joaquin Villalobos and other leaders of the People’s Revolutionary Army (ERP)…

Walking to the Edge – Essays of Resistance, Margaret Randall

In the Name of the People : El Salvador’s Civil War