Ramin Hossein Panahi was a Kurdish militant, sentenced to death in January 2018 by the Iranian regime. Ramin, and two other Kurdish prisoners, Zanyar Moradi and Loghman Moradi were executed on Saturday, 8th September 2018 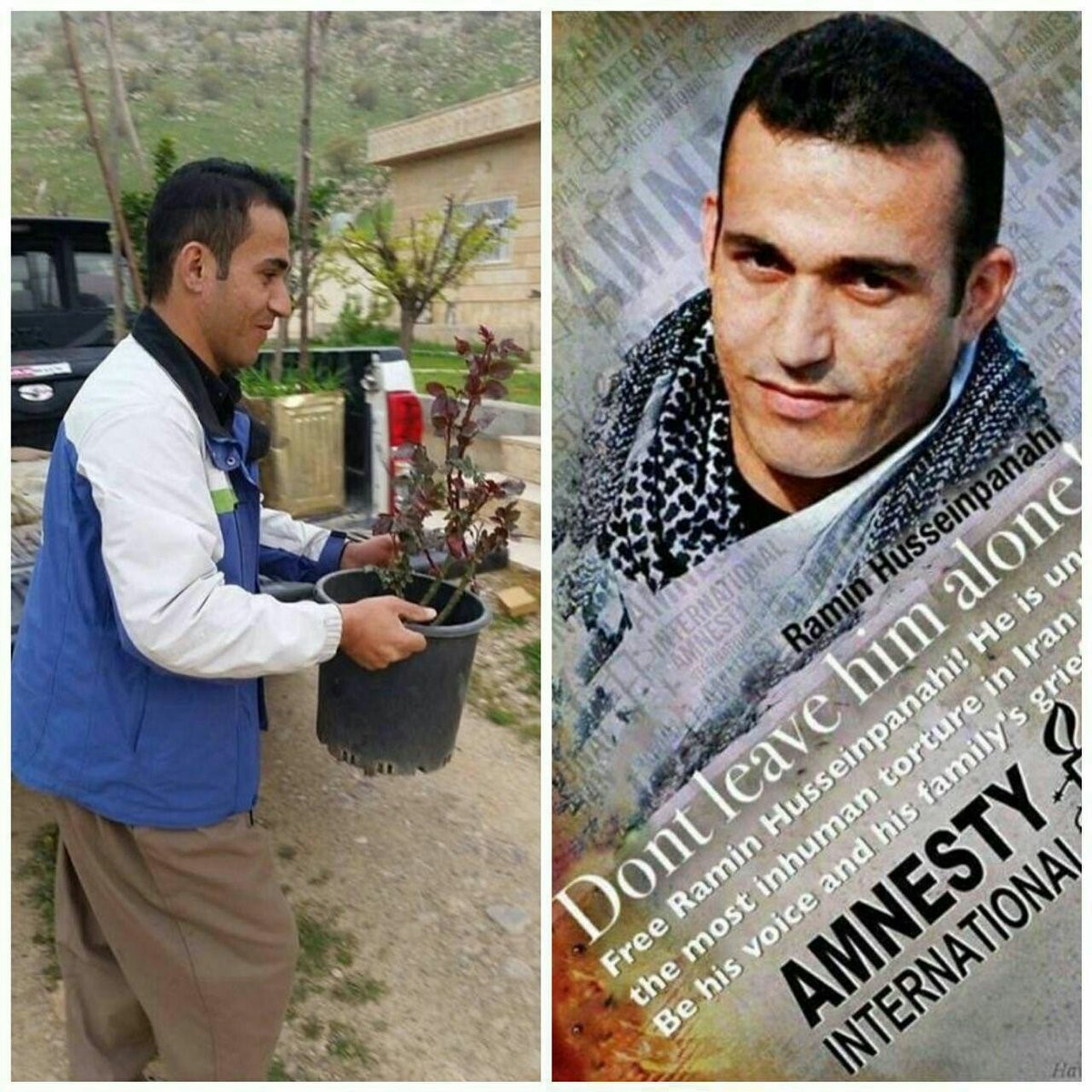 “Woe to people who are intimidated by the killing of their fellow human beings and hide themselves. This is what makes the criminals more resolute in carrying out and continuing their crimes and their oppression. Happy are the people who have young children like Zanyar, Loghman and Ramin who, at the peak of their love for life, proudly wear the noose to uproot the gallows that has been erected over the horizon of our people.” — Arash Sadeghi, Ebrahim Firouzi, Payam Shakiba, Pirouz Mansouri, Saeed Shirzad, Saeed Masouri, Javad Fouladvand, Hassan Sadeghi, Majid Asadi, Mohammad Banazadeh Amirkhizi – Political Prisoners of Gohardasht, Karaj, Iran. September 12, 2018  (Global Rights)

Ramin Hossein Panahi, 22 years old, was a Kurdish militant, sentenced to death in January 2018 by the Iranian regime; Ramin, and two other Kurdish prisoners, Zanyar Moradi (29) and Loghman Moradi (31) were executed, by hanging, on Saturday, 8th September 2018, in the face of local and international calls that their lives be spared, including calls by UN Special Rapporteur on arbitrary executions Agnes Callamard and the UN Special rapporteur on human rights in Iran, Javaid Rehman, “who had asked the authorities in Iran to “immediately halt” these executions and annul all three death sentences due to credible concerns that they did not receive a fair trial and that they had been tortured into making false confessions”. (Global Rights)

As if now to add insult to injury…

…The Iranian regime, long seen as an oppressor of its Kurdish minority (“Kurds are subject to repression, discrimination, unequal access to education, execution, detention, torture, arbitrary killings and major violations of freedom of association and assembly….” UNPO), often through its notorious security apparatus, has now turned its attention to Parwaneh Hossein Panahi, the sister of Ramin, who the Kurdistan Human Rights Network tells us, has once again been  “summoned to the Sanandaj Intelligence Office” in recent days.

“02.05.2019: Parwaneh Hosseinpanahi, sister of the Kurdish political prisoner known as Ramin Hossein Panahi who was executed in September, has been telephone summoned, interrogated and threatened by the intelligence Office of Sanandaj.

“According to a family member, Ms. Hossein Panahi was summoned due to her attempts to find out how her brother was buried. Interrogators have threatened her that she did not have the right to make enquiries regarding her brother’s burial ground.

“Ms. Hossein Panahi has been summoned by the Intelligence Office of Sanandaj and Qorveh several times in addition to being arrested once. She had been previously sentenced to five years of suspended imprisonment on charges of “propaganda against the state through interviews with foreign media abroad”.

Since the execution of Ramin Hossein Panahi last September, the Iranian regime has refused to disclose where his body, as well as the bodies of those executed alongside him, are buried, despite requests by the families.

Iran is sadly never long off international radar for its contempt for human rights, most recently being indicted by Human Rights Watch for its execution of two children as well as the earlier news of the jailing of human rights lawyer Nasrin Sotoudeh, sent to prison for 33 years along with 148 lashes for her defence of women who had removed their headscarves in public, as well as obviously alienating the mostly-male regime leadership with her habit of defending opposition activists. The charges against her included “spying, spreading propaganda and insulting Iran’s supreme leader, her lawyer said…”

The Panahi family, once again, are probably not guaranteed much news coverage, despite the ordeal they went through in 2018…

Having said that, and in the face of the Iranian Intelligence and Security apparatus asserting she “did not have the right to make enquiries regarding her brother’s burial ground” –  as well as earlier charging her with “propaganda against the state through interviews with foreign media abroad” – the only rational response has to be,

Where does the arrogance of these officials of the Islamic Republic or of its leadership, entrusted with the well-being of ‘their’ citizens, end?

It is thought that the widespread protests that were organised to try and save Ramin Hossein Panahi’s life resulted in the delay of his death sentence being carried out. If so, it is time now that widespread opinion across the world raise its voice in support of Parwaneh Hossein Panahi, along with Nasrin Sotoudeh, as well as all the victims of this regime’s arrogant contempt for human rights, from the regime leadership itself, down through its intelligence officers, security personnel, interrogators, revolutionary guards, etc. in order that they may be encouraged to learn compassion in their treatment of their citizens and put an end to what is recognised internationally, with great shame, as a notorious record of ongoing human rights abuses against the people of Iran – to say nothing of its ongoing refusal to recognise the rights of the minorities who make up almost half of the ‘Iranian’ population.