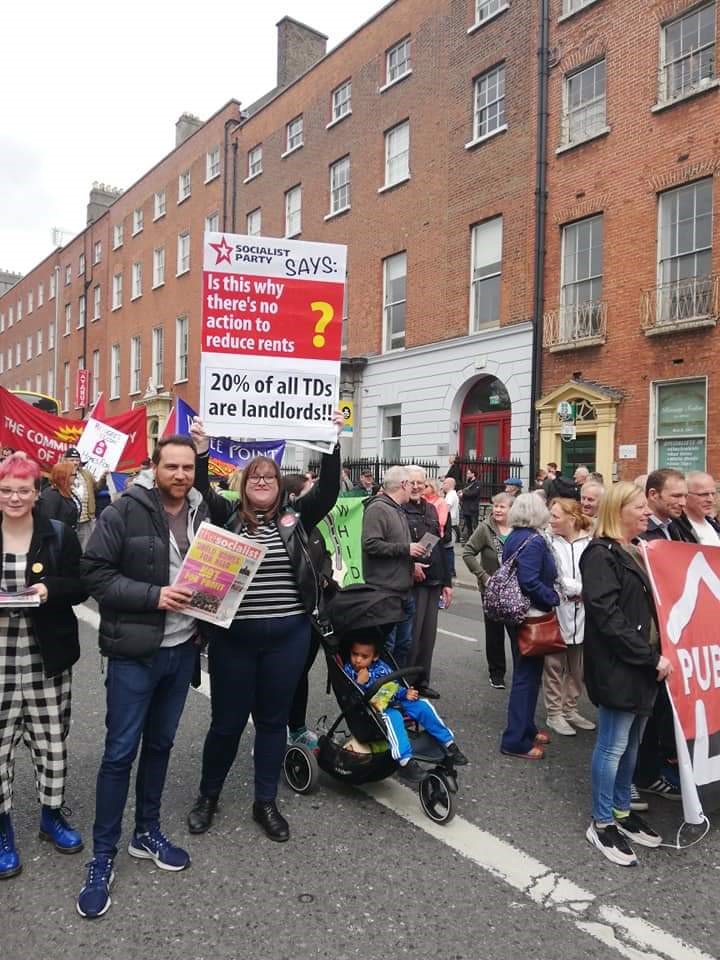 This time last year we learnt that one in every five TDs (public representatives in the Irish Dáil [parliament]) –  are actually landlords (“30 of Ireland’s 158 TDs are landlords. That includes at least four out of 15 of the current Cabinet.” Global Rights, May, 2018) “The question, of course that follows, in a country that seems to have an enormous problem with either controlling the housing (or any other) market (or property developers themselves, or the banks or other “powerful” groups within society): is there a conflict of interest?”

At the same time, due to its inability (or unwillingness) to provide social housing for “its” people, the Irish state paid almost €700 million to private landlords to house a portion of those forced to find housing in the private market. “This is a massive transfer of public money to private landlords,” Sinn Féin’s housing spokesperson Eoin Ó Broin said, earlier in the year.

Now over a year later we find that the housing situation – despite increased revenue into the government’s vaults, despite endless promises, plans, etc., etc. – has, in fact, deteriorated.

The latest figures for March 2019 from the Department of Housing show there were 10,305 people registered as homeless in Ireland, including 3,821 children.  There are also another 87,000 households on social housing waiting lists. A fact the Raise The Roof Rally in Dublin on 18 May brought thousands of people out onto the streets to protest against. The Rally organisers said close to 20,000 people joined the march, while other estimates put it at around 12,000-15,000. (RTE)

This is not the first and it won’t be the last protest… to fall on the deaf ears of those with little need for housing themselves (politicians and their friends in business)… those who, when they hear of the «Common Good» see nothing other than leftist rhetoric in the demands of the housing and homeless campaigners currently trying to effect a shift in government practice here in a way similar to the successful water charges campaign some time back.

Covering the May 18 rally the Irish Times quoted John Douglas of the Mandate Trade Union who said people have been “betrayed” by the Government and should be punished by voters at the European and local elections on Friday May 24th.

“The Government needs to declare a housing emergency and give people a legal right to a home. The Government’s strategy Rebuilding Ireland is failing and homelessness is increasing. Voters need to send a message loud and clear to the Government this Friday and punish them for keeping the housing crisis going… The Government are putting millions of euro into the pockets of direct provision centre owners and B&B and hotel owners while our own citizens don’t have housing…” (John Douglas)

Likewise housing campaigner Peter McVerry (who recently upgraded the term “housing crisis” to that of an impending “housing catastrophe”):

“There are at least half a million people in the country whose housing situation is causing them stress – from overcrowded houses to those living in poor quality private accommodation who can’t complain due to fear. There are those in their 20s, 30s and 40s still living with their parents who can’t move out of home and be independent… There are people paying over 60 per cent of their wages on rent to hand over to a landlord. I think Karl Marx would have something to say about that and the transfer of wealth…”

What Marx did say (in the Communist Manifesto of 1848), may well be relevant here: “…the bourgeoisie has at last, since the establishment of Modern Industry and of the world market, conquered for itself, in the modern representative State, exclusive political sway. The executive of the modern state is but a committee for managing the common affairs of the whole bourgeoisie.”

…As well, obviously, as a committee for organising the transfer of enormous public assets into the hands of private individuals and corporations.

The situation has deteriorated so badly that even the less than revolutionary Irish Congress of Trade Unions (ICTU) through its General Secretary Patricia King added to the debate:

“…huge numbers of young workers and their families now find themselves locked out of the housing market, unable to either buy or rent an affordable place to live. Housing is no longer seen as a human right but as a plaything of speculators and developers.

“As part of  Raise the Roof campaign, Congress has put forward clear solutions to this crisis, such as the urgent need to build more public housing and to create a legal right to housing, which already exists in some 80 countries worldwide. A petition in support of the Right to Housing is available at this link: https://www.ictu.ie/raisetheroofpetition.”

The demands to address this outrageous and unacceptable situation are simple, even if apparently impossible to implement by a regime here that is capable of throwing money left, right and centre (for example, the cost of the new Children’s Hospital has risen from its original €650m «to surge past €2bn»; while the proposed handout of the state for Rural Broadband to whatever contractors eventually lease it to those of us with sufficient funds to pay them, is estimated at €3 billion)…

An end to evictions;

…and now, like the other demands, just about to bite the dust:

…As for a Right to Housing

As part of the National Homeless and Housing Coalition, Sinn Féin called for a referendum to enshrine a right to housing in the Constitution, introducing the bill to the Dáil to coincide with last Saturday’s planned Raise the Roof rally in Dublin city centre.

“The Thirty-fifth Amendment of the Constitution (Right to a Home) Bill… seeks to insert in the Constitution, this State’s foundational law, a right to adequate, appropriate, secure, safe and, crucially, affordable housing. It also seeks to place an obligation on the State to ensure the realisation of that right through its laws and policies in accordance with the principles of social justice. This proposition was endorsed by 84% of the people involved in the Constitutional Convention in 2014. It is a right that exists in many jurisdictions, including Belgium, Finland, the Netherlands, Portugal, Spain and Sweden, to name just a few. If passed, it would not guarantee every person in the State a home but it would provide a basic floor of protection, obliging the State to realise that right progressively. According to Mercy Law Resource Centre, which has published three separate reports on the issue, a constitutional right to housing would «mean that legislation and policy would have to be proofed to ensure they reasonably protect that right». Mercy Law Resource Centre goes on to say that while a legal right to a home is not a silver bullet and would not solve all our housing problems overnight, it is an important tool that would ensure this Government and future Governments introduce policies that promote and protect access to appropriate, secure and affordable homes.

Placing the right to housing in the Constitution would provide a basic floor of protection for those unable to access secure or affordable accommodation @EOBroin #RaiseTheRoof pic.twitter.com/EvX5UcjmKX

Eoin Ó Broin went on to point out the endless contradictions of government statements around their Rebuilding Ireland policy as well as the so-called  rent pressure zones which, he assured us, are not working…

“Rebuilding Ireland is based on the same failed policy consensus that has dominated Government housing policy for decades, a consensus that underinvests in public housing and over-relies on the private sector to meet social and affordable housing need.”

… for while even the dogs on the street know it well, it seems the current  government needs to be told:

Rents continue to spiral out of control,

and the number of adults and children in emergency accommodation has now hit historical highs.

Ó Broin also pointed out that the recent Daft.ie Rental report, had found that average rents across the country have reached “an all-time high of €1,366 per month, with rents in the capital, Dublin at €1,700 to €2,200 per month for rent.”

“Clearly any young person, any young professional couple or anybody with half decent income would not be able to afford those kinds of rents and that just shows you that there is an entire generation of people who are locked out of affordable rental or purchased accommodation. All the more reason why we need to see a right to housing.” (Eoin Ó Broin)

The government’s response, through its Minister of State at the Department of Justice and Equality, Deputy David Stanton – (the minister with responsibility, Minister for Housing, Planning and Local Government, Deputy Eoghan Murphy not managing to turn up: “…the idea that the Minister for Housing, Planning and Local Government could not have taken half an hour to come out to participate in this crucially important debate speaks volumes for the Government and the fact that the lead spokesperson for Fianna Fáil could not have been bothered to show up” Eoin Ó Broin pointed out):

“This would place the right to a home ahead of rights to social security or essential healthcare and it needs to be considered whether this is appropriate. For these reasons, the Government prefers that the right to a home be considered with the other economic, cultural and social rights, and that the process already agreed is followed. That process is the referral of the eighth report of the Constitutional Convention to the Joint Committee on Finance, Public Expenditure and Reform, and Taoiseach for a comprehensive examination of the issues raised.” (Deputy David Stanton, Fine Gael)

Having heard all this (and more) – 96 of the public representatives of the 158 member parliament who turned up on the 16 May, following this debate, (2 days before the protest) – the Irish Dáil (and in particular the governing parties, Fine Gael and Fianna Fáil) voted 36-60 to reject the Sinn Féin bill.

Fine Gael and Fianna Fáil just voted against the right to housing. Please take    note of that in the local and European elections next week! Come to   @RaiseTheRoofC protest on Saturday #LE19 #EP2019 #RaiseTheRoof

The last word – an focal deireanach

Launching the rally a few days before the 18th, Damien Dempsey the singer lambasted the government of one of the richest countries in the world for its inability to look after its own people (the ‘poor ones’ that is)… singing the old lament for James Connolly the revolutionary Marxist executed by the British for his role in the 1916 Rising against the empire:

Where oh where is our James Connolly ?

Where oh where is that gallant man ?

He is gone to organise the Union

That working men they may yet be free.

During the Dáil debate on the proposed referendum Deputy Gerry Adams, for Sinn Féin also quoted the working class radical:

“James Connolly, the great Irish revolutionary in 1899 predicted all of this. He wrote:

“After Ireland is free, says the patriot who won’t touch socialism … if you won’t pay your rent you will be evicted same as now. But the evicting party … will wear green uniforms and the Harp without the Crown, and the warrant turning you out on the roadside will be stamped with the arms of the Irish Republic.”

…From landlords, property, landord-ism? Or the fact that a human life (and human misery) can have a price fixed to it..?

Housing is a human right. Remember FF and FG voted against the right to housing last Thursday

RebuildingIreland,  an  Action  Plan for Housing  and  Homelessness

The fact that Rebuilding Ireland is a technical success but practical failure reveals some of the weaknesses at the heart of it.

The Right to Housing in Comparative Perspective

Other Global Rights articles on Ireland

Why are so many people homeless in Ireland? | Al Jazeera The Stream (2017)

My life in a hotel room: Ireland’s hidden homeless crisis (The Guardian, Dec. 2018)