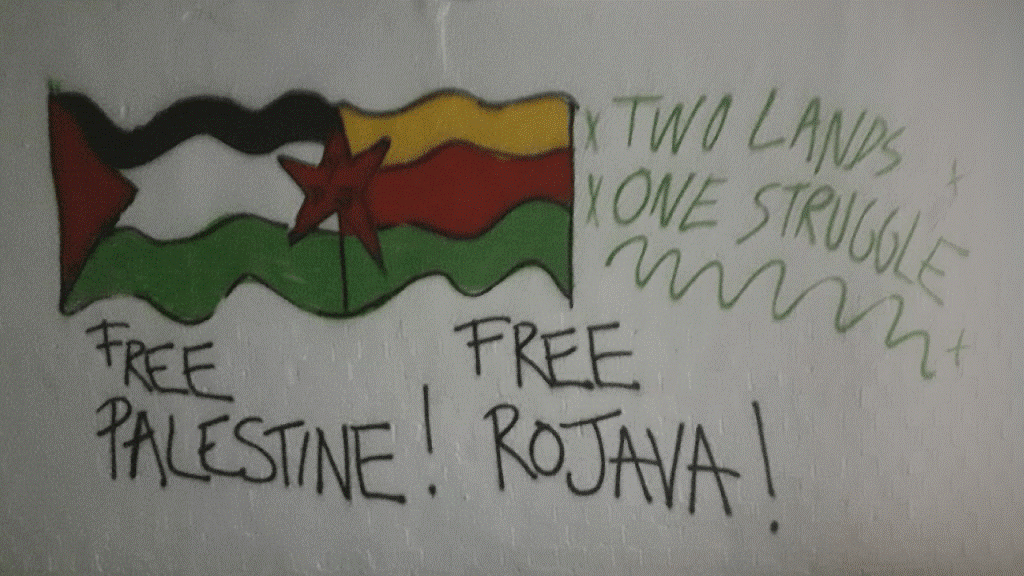 Today, on the 15th May 2019 we write to remember the struggle in Palestine and mark 71 years since the Nakba (catastrophe) expelled approximately 700,000 people from their homes and land following the announcement of the establishment of the state of Israel on the 14th May 1948. We, at the Internationalist Commune of Rojava, extend our solidarity to the Palestinian cause, and acknowledge that the struggle in Palestine against the occupation of the Israeli state is one branch of the struggle we have here in Kurdistan to liberate the Middle East from the current system of nation state fascism and return the region to the government of its people. This system of self government must be one that can overcome the mentality of oppression and division of people along cultural, linguistic and religious lines that is built by the state. A system that is created through communality and solidarity against capitalist exploitation and colonialism.

It is important never to forget that the Turkish and Israeli states are part of a wider plan in the Middle East, and that whilst there may be public hostilities between the two, behind closed doors they operate under the same banner of fascism and domination. Equally, both are free to pursue their policies of genocide against Kurds and Palestinians alike because of their strategic importance to the imperialist powers of the United States and Russia.

In the last few weeks we have seen ample evidence of the connection between Turkey and Israel, as well as the control exerted over them by their imperialist allies. On 4th May, Israel carried out a number of airstrikes on the besieged population of Gaza killing 24 people including a mother and her young child. On the same day Turkish forces and the Jihadist gangs they work with attacked Til Rifat, Shehba and Shera, with the aim of annexing the area and further displacing the 125,000 Kurdish refugees who fled to the region after the Turkish invasion of Afrin in January 2018.

In previous months Israel has also carried out a number of airstrikes on Aleppo and Damascus to agitate Iranian forces in the region and further the quest of the United States government to provoke a war with the Iranian state. Equally, despite the Turkish state’s desire that Idlib not be emptied of the jihadist gangs controlling the region, Russian bombing began in the area on the 3rd May-just one week after Russia and Turkey met to discuss ‘the Syrian question’. The fact that the Turkish attack on Til Rifat came at almost the same time as the start of the Russian offensive in Idlib suggests that there was some kind of deal made where parts of Syria were exchanged between the two states, though this has of course not been confirmed by either party.

Further similarities exist between Turkish state fascism and the fascism of the Israeli state when we consider the way that settlements have been managed in both Palestine and Kurdistan. In a pre-election speech on the 9th April 2019 Benjamin Netanyahu promised that more Palestinian land in the West Bank would be annexed for Israeli settlement, in this speech Netanyahu stated, ‘I will extend Israeli sovereignty, I don’t distinguish between settlement blocks and isolated settlements.’

The Turkish government is also pursuing this policy of displacement and ethnic cleansing in Afrin, and is currently hoping to hold a referendum to split the Afrin region from Syria, which would officially make it part of Turkey. A report from Ronahi TV on the 6th May 2019 also stated that the Turkish state is planning to settle 16,000 refugees from South Idlib (including the jihadist gangs that operate there) in Afrin and its surrounding areas.

Historically, there is also evidence of a working relationship between the Turkish state and the Israeli state, though this relationship has mainly been expressed subtly, though quiet acts of support from one party to the other. For example, when US president Donald Trump recognised Jerusalem as the capital of Israel in December 2017, Turkey was the first state in the Middle East to reaffirm this decision by having a debate in its parliament about whether Jerusalem was a city ‘comparable to Ankara’. Following this debate a vote was held with only the HDP (The Peoples’ Democratic Party) voting against this proposal. This is proof that whilst Erdogan may use Twitter to condemn Netanyahu and his government’s genocide against Palestinians, in practice his support is fully behind the Israeli occupation of Palestine.

It should be clear to any person invested in the politics of the Middle East that freedom in the region can only exist if we destroy both Turkish and Israeli state fascism and that the creation of freedom through new democratic confederalist structures must include the removal of all oppressive powers whether they are based in Tel Aviv or Ankara.

Today Rojava shows us, that a system in which the people are living together in peace and sisterhood, defending there different identities together against the states agressions and strategies of division is possible. If we call “to build one, two, three Rojavas” we call for resistance against imperialism and colonialism, but we also call to build many communes in which people can live together, unitied in there differences.

We, as internationalists from the Middle East, Asia, Africa, Europa, America and Oceania, have been working in different structures of the revolution in Rojava and Northern Syria for many years. Though we come from different political backgrounds, the Kurdish movement united and inspired us with a new revolutionary perspective going far beyond the Middle East.