The Miami Showband massacre: A cover-up in plain sight

It’s a strange thing, scrolling through the options on Netflix and seeing a documentary on the Miami Showband 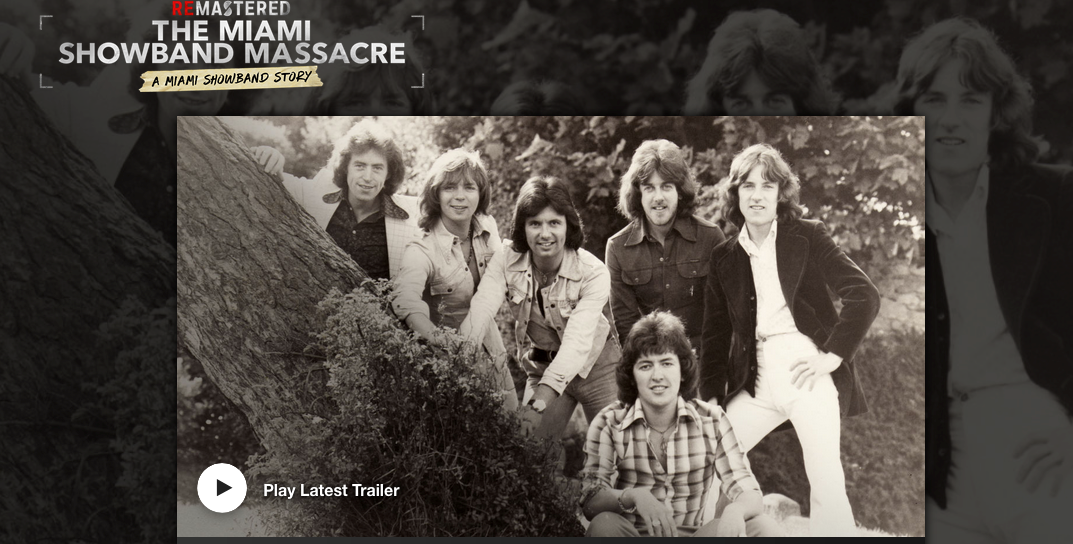 It’s a strange thing, scrolling through the options on Netflix and seeing a documentary on the Miami Showband.

For most in Australia and the world, the name is unfamiliar, but for people who lived through or have studied what became known as “The Troubles” in Northern Ireland between the late 1960s and the Good Friday Agreement in 1998, the situation is different.

Here on this global media entertainment platform, amid rom-coms and action movies, is a film detailing how the British government organised, supplied and directed a terrorist group to murder people in six counties in Ireland’s north under British occupation.

Among their targets was a music group on a country road outside of Banbridge, County Antrim, on July 31, 1975.

The documentary’s primary commentator is Steve Travers, bass player for the popular rock band from Dublin in Ireland’s south. Travers describes growing up respecting uniforms and believing he would one day join the Beatles. He joined the Miami Showband, widely considered one of Ireland’s best groups at the time. His band mates were Des Lee, frontman and saxophonist; lead singer and dreamy heartthrob Fran O’Toole, drummer Ray Millar, guitarist Tony Geraghty and Brian McCoy on trumpet.

The band would cross the island living a life relatively unaffected by the growing outbreaks of violence and resistance in the north.

All such sheltered naivety came to an end, however, when the band drove home to Dublin following a gig in Banbridge on July 30. Early into the drive, they were stopped at what appeared to be a British military checkpoint. There were uniforms and a request to inspect the van from a curt, posh British accent, followed by an explosion and machine gun fire that killed three band members — O’Toole, McCoy and Geraghty.

Travers himself was taken to intensive care after Lee ran to the local police station to get help.

The killing of the band members, the first case of a music group being targeted, caused shock across Ireland. As one interviewee put it, “With violence all around, the dance hall was a place where you could get away for a bit. It was therapy for us.” Travers describes how he thought at the time that “as a band, as musicians, we were immune to what was going on around us”.

Following their recovery in hospital and the funerals for the three killed, the surviving band members tried to put the band back together, but the highly traumatic events of that night would shape the rest of Travers’ life: “You go into an event, and come out of that event a completely different person … the person I was was left back in a field on July 31, 1975.”

The explosion was a bomb in the van that detonated prematurely. Two men who died placing it were quickly identified as members of the Ulster Volunteer Force, a unionist paramilitary group. Days later, two more men were arrested, also UVF members and active in the British “Home Guard” Ulster Defence Regiment (UDR). Investigations would discover that all weapons used in the attack had come from army compounds.

The documentary lays out the struggle undertaken primarily by Travers to learn the truth of what happened that night. From a starting point of believing that this was a case of “some bad apples”, Travers is confronted with the reality of direct collusion between the UVF and agents of the British Intelligence Service.

Former British intelligence officers Colin Wallace and Fred Holroyd testified that they and their superiors knew that the UVF were committing terrorist acts, but were not permitted to act against them. Many of those involved in the attack had been responsible for four bombs in Dublin and Monaghan the year before, but still were left untouched by the police.

Evidence was found that proves senior police officials warned local UVF leader Robin Jackson (the “Jackal”) to “lie low”, and provided him with alibis and information related to the police investigation.

According to Margaret Urwin from Justice for the Forgotten, this proves that Jackson was operating as a British agent, stating: “We believe that this and other important information proves that Robin Jackson was an agent. You have somebody who is murdering people at the same time he is being controlled by the state. In my mind, that then makes the state complicit.”

On the ongoing dismissal of his testimony that a British officer was present that night, Travers states: “The more evidence I saw, I had to realise that the British government, through its proxy army, they chose us as innocent victims, to murder us in order to achieve their political objective. They wanted the southern government to close the border with the north.

“So they decided, ‘Let’s frame the most innocent and trusted commuters; people who travelled up and down. And we would have gone down in history as terrorists carrying bombs for the IRA’.”

With the mission botched, “It became plain to me that [they were] determined to keep guilt for what happened on this side of the Irish Sea,” said Travers. “They clearly wanted to throw anyone from this side, be it the UDR or the police, to the wolves. They didn’t want to implicate the British establishment.”

During the Prime Ministership of Margaret Thatcher, Wallace and Holroyd wrote to her outlining, in a 32-page dossier, the various illegal activities of the British army and intelligence in the north of Ireland. Soon after, Wallace was sentenced to 10-years’ jail on circumstantial evidence on a charge of murder, while Holroyd was committed to a military psychiatric hospital.

Years later, Travers gained access to declassified correspondence from 1987 between the UVF and the Irish government in Dublin, in which the UVF complained that British agency MI5 gave them dodgy bombs and weapons to carry out their work, including the Miami killings.  The UVF explosively claimed MI5 had tasked them with assassinating Irish Prime Minister Charlie Haughey.

There, on a single piece of paper, was not only proof that the UVF was responsible and being directed by the British government, but that its Irish counterpart had known for so long and done nothing. It exposed an appalling betrayal of the people and their families, whose lives had been so affected by British state crimes.

No matter what you know of the Miami killings, or the covert activities of Britain or other imperialist powers, The Miami Showband Massacre is still an important, troubling watch. One thing I keep mulling over is that it exists on Netflix at all. The documentary is a damning exposure of the crimes of the British state, crimes that have never been formally acknowledged, let alone acted upon, and yet here is the case sitting on a digital shelf accessible to all as an entertainment option.

But then comes the realisation that, rather than unique, the case of the Miami killings is just a particularly dramatic moment in the historical Irish/Irish Catholic experience; a mixture of trauma, indifference and compassion fatigue. People know, people might find it interesting, but the assumption is that no cares enough to do anything about it.

Nonetheless, films like this are important, to teach real people’s history and hopefully inform social processes aimed at ensuring such violence and agendas don’t play out in the future. Ironic, then, that Netflix is arguably contributing more than either of the current Irish and British establishments.

The growing prospects of a Jeremy Corbyn-led Labour government in Britain gives hope that this historic agenda might change with a dismantling of colonial attitudes and formal recognition given to crimes of the past. Until then, people like Travers will be taking on the whole system in the fight for answers and justice.

Material published on Green Left is very welcome to be reposted, providing green Left is credited and a link back to the original is included.