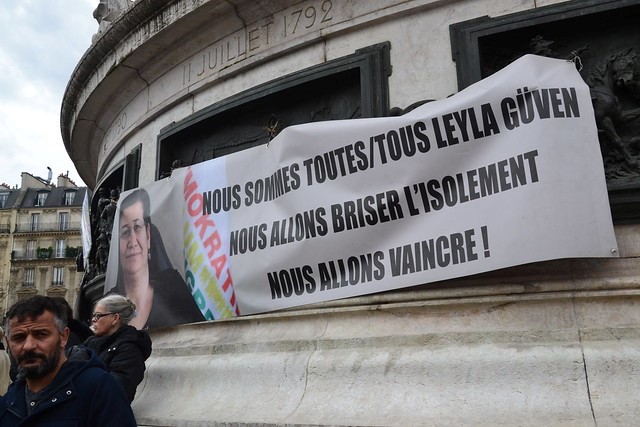 Peoples’ Democratic Party (HDP) vice co-chair Responsible for Foreign Affairs, Hişyar Özsoy, wrote a letter to the international community regarding the 15 political prisoners who have turned their hunger strike into a “death fast”.

The letter reads as follows;

“Leyla Güven, the Co-Chair of Democratic Society Congress (DTK) and HDP deputy for Hakkari, went on hunger strike on 8 November 2018 to protest the isolation of Mr Abdullah Öcalan and three other prisoners held on Imrali Island Prison. Apart from Ms Güven, HDP deputies Dersim Dağ, Tayip Temel and Murat Sarısaç, thousands of political prisoners in Turkey, and activists and politicians in the Kurdistan Regional Government in Iraq, Germany, Wales, France, Canada and other places have also joined the strike.

Öcalan was the chief negotiator of the Kurdish movement in the peace process between 2013 and 2015. When the Turkish government terminated the peace process in April 2015, it simultaneously isolated Mr Öcalan from the society. That is, Turkish authorities do not allow Mr Öcalan to receive visits from his lawyers, family members, or any others. He is not able to make phone calls, or send or receive letters, either.

The Committee for the Prevention of Torture (CPT) and Parliamentary Assembly of the Council of Europe (PACE) have repeatedly emphasized that the isolation of Mr Öcalan was in violation of Articles 3 and 10 of the European Convention of Human Rights and called upon the Turkish authorities to ensure that all prisoners at Imrali Prison are able, if they wish so, to receive visits from their relatives and lawyers.

Upon months of indifference of Turkish authorities despite deteriorating health of hunger strikers, 15 political prisoners in four prisons turned their hunger strike into “death fast” on 30 April 2019. The names of prisons and prisoners are: Bakırköy Women’s Prison; Nesrin Akgül, Şükran Aydın and Zozan Çiçek; Gebze Women’s Prison; Ardıl Çeşme and Aslı Doğan; Van High Security Prison; Ahmet Anığı, Özhan Ceyhan, Vedat Özağar, İhsan Bulut and Erol Çelik; Diyarbakır D Type Prison, Ergin Akhan, Enver Dönmez, Ahmet Topkaya, A. Haluk Kaplan and Ferhat Turgay. Among these prisoners, Nesrin Akgul joined the hunger strike on 15 January 2019, while all others initiated their hunger strike on 1 March 2019. Unlike hunger strikers, who consume several liquids and take vitamin B during, the prisoners on death fast only drink water with sugar and salt in it.

These 15 political prisoners, who have already been emaciated due to their months-long hunger strike, may not survive for long, if Turkish authorities do not take urgent steps to remove the unlawful isolation imposed on Mr Öcalan. Eight prisoners had already taken their lives in late March and early April to protest the policy of isolation.

We once again call upon the international community not to remain silent and indifferent but take initiative for overcoming the aggravating situation. Ending the policy of isolation will contribute to normalization of political life in Turkey, re-initiate democratic dialogue, and hopefully resume the peace process in the context of the Kurdish issue.”

By Jeanne Menjoulet  Some Rights Reserved