Why are Colombian indigenous peoples protesting against President Ivan Duque?

Indigenous people are leading a mass movement in Colombia 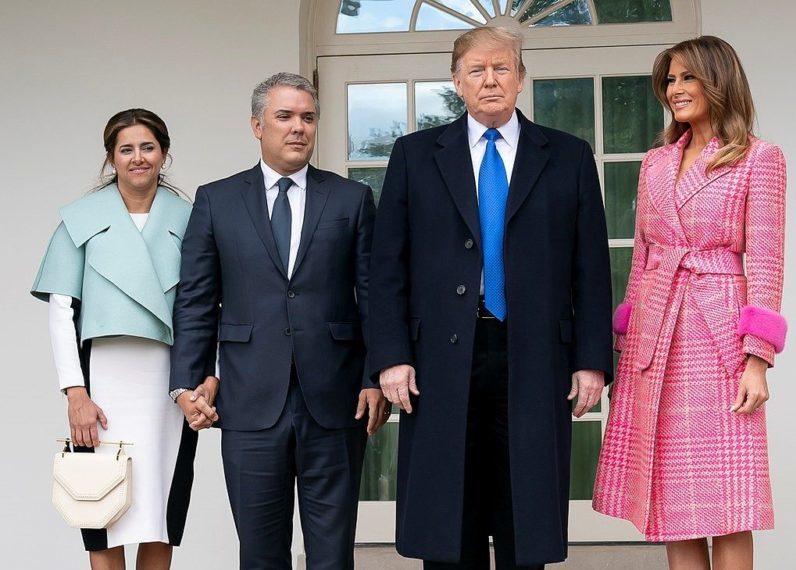 Indigenous, Afro-Colombian, and farming communities are staging mass protests around Colombia against President Ivan Duque’s National Development Plan, an array of directives that, among other things, will encourage foreign investment in large-scale mining and agribusiness which could threaten indigenous territories.

In March 2019, indigenous communities shut down a major highway in the Cauca region for 25 days. On April 25, they were joined by other social movements in leading a national strike. Besides threats to indigenous rights, strikers have protested against budgets cuts in education and the slow implementation of the 2016 Peace Accords — of which Duque, who’s still to complete a year in office, is an outspoken critic.

Indigenous peoples have referred to the demonstrations as “mingas,” a Quechua word meaning “collective work” widely used in protest movements in South America.

#NationalStrike | Indigenous communities, farmers, and afros of Tado, are mobilizing from the early hours of the morning all along the highway from Pereira to Quibdo as part of the National Strike #It’sWorthItToProtest

The National Development Plan includes reforms in different sectors, such as education, energy, and agriculture. While Duque claims the programs will lift 3,4 million Colombians out of poverty, critics counter that it benefits primarily private corporations. Indigenous minga leaders are particularly concerned with the aspects of the plan that might challenge their right to prior consultation on development projects on their territories.

While the government has agreed to negotiate with indigenous leaders about the plan, a final agreement is yet to be reached. According to the newspaper El Espectador, the amount of land the government is willing to protect on behalf of indigenous peoples are way below of what the communities demand:

“The difference between what Iván Duque’s government offers and what the indigenous communities are asking for in order to open the Panamericana highway is abysmal. The President talks about 1,500 hectares to resolve the needs of all the organizations that make up the minga, whereas the requirements of the organizations that are protesting is 40,000 hectares.”

Signed between former President Juan Manuel Santos and the leaders of the Revolutionary Armed Forces of Colombia, the country’s largest guerrilla group, the 2016 Peace Accords ended the country’s five-decade internal conflict by proclaiming a definitive ceasefire in exchange for participation by former FARC members in institutional politics.

The Peace Accords have also created protections to prevent the accumulation of land by individuals and foreign companies in rural areas. It prioritized land redistribution and designated a few areas for indigenous, Afro-Colombian, and farming communities who have been severely affected by the long conflict. Unequal land ownership in rural areas was a major reason why FARC group took up arms in the 1960s.

However, full implementation of the agreement has remained elusive as many conservative sectors in Colombia are staunchly against those terms. Meanwhile, smaller armed groups remain active in the countryside, where they have staged deadly disputes for control over FARC’s former territories. As a consequence, the number of killed social leaders in rural areas has skyrocketed since the Accords’ signature. While figures vary depending on how a “social leader” is defined, the Colombian ombudsman’s office says 460 social leaders have been killed between 2016 and March 31, 2019.

Duque, along with his main ally, former President Álvaro Uribe, is among the most prominent detractors of the peace agreement. In recent months, he has attempted to weaken the authority of the Special Jurisdiction for Peace (JEP) a judicial body created by the Accords to try both guerrilla and government actors suspected of war crimes. Many groups are outraged at those measures, which they say could undermine the chances of true reconciliation.

People shared their reasons for joining the April 25 strike with the hashtag #VamosAlParoPor (We Are Going to Strike For) and #MingaNacionalPorLaVida (National Minga For Life).

We are going to strike for the indigenous minga, because we demand protection to social leaders, former fighters, in support of the JEP and the implementation of the peace accords. For better labor conditions for teachers and workers’ centrals.

La Pulla, a YouTube channel of political commentary, delved into the growing tension in a video titled in a video titled “Esto pasa cuando el Estado ignora a su gente” (This is What Happens when a Government Ignores its People), where they examine the long history of government neglect in the countryside, particularly the departments of Cauca, Nariño, La Guajira, and Catatumbo. The journalist states (Original Quote):

“The minga reminds us that it is not the only place where people live with unfulfilled (promises), with the government flicking them off every time it can. We see four regions of the country that the state ignores completely.”

No definite solution has been given to the minga’s and strikers’ demands, so protests are likely to continue in the coming months.

* by Kati Hinman (was previously a human rights accompanier in Colombia) – Source:  Global Voices (CC BY 3.0)

By The White House from Washington, DC [Public domain]