Against Erasure: Art and Sudan’s Sit-in 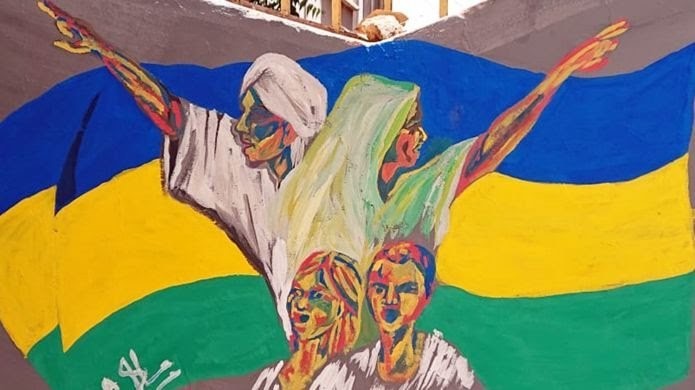 More than 100 people were killed and hundreds injured in the government’s June 3 attack on a sit-in in Khartoum, where protesters were gathered to demand justice, accountability, and choice in their future governance. The sit-in site had also been a site for art:

Before it was brutally stormed at dawn on Monday, June 3, the sit-in site at the gates of the military headquarters in Khartoum was considered Sudan’s largest creative hub. There, dozens of young peaceful protesters were killed: burned alive, tied to rocks and drowned in the Nile, sexually assaulted and grievously wounded by militias and paramilitaries.

The raid has also targeted and unleashed massive destruction on the once-biggest open exhibition. A shocking amount of artillery fire and live ammunition were used. Bursts of gunfire punctured sound systems, speakers, musical instruments, posters, paintings, and various artworks. Walls once covered with portraits of fallen activists and protesters, as well as revolutionary graffiti have been destroyed and whitewashed.

The revolutionaries’ field of dreams, where they collectively set the blueprint and mini model of a civilian and democratic state, and a harmonious multi-cultural society, have been turned into wreckage and ruins. Mobile tents that were used as make shift first-aid stations, classes, small public libraries, and workshops’ venues have been savagely wrecked and set on fire.

The sit-in site provided a space that connected various generations of civic activists, campaigners, bloggers, multi-disciplinary artists, designers, writers, musicians, sound artists, photographers and film makers. Enriching conversations and collaborations were conducted. New projects and promising initiatives were discussed over cups of tea. A group of artists were dedicatedly working on the ambitious project of making World’s Largest Protest Banner, featuring portraits of fallen activists, together with signatures to set a new Guinness World Record. Many of those devoted and purposeful change-makers have been reduced to mere numbers in casualties and death toll reports.

Exhibitions of posters, portraits, collages, sculptures and woodwork quenched the audience’s thirst for free visual art and provided fresh themes and interpretations using new materials and techniques to explore and express the range and diversity of Sudanism. Some of the artworks depicted the experience of the revolution with context and impressions of what was met, seen, and felt.

Various social, cultural, ethnic, religious, and political backgrounds were woven into the fabric of the Sudanese revolution. Active initiatives kept blooming in the fertile field of the site. Tents with long desks full of books at either side served as public libraries, where readers had access to banned books, including the books of Fathi-al-Daw and the novels of A. Baraka Sakin, which were once traded secretly in the country. Other tents have served as literacy classes, which aimed to secure a safe and friendly learning environment to educate, inform, enlighten, and engage different age groups.

The sit-in site also served as a huge center for amusement and enlightenment. It provided a platform for both professionals and amateurs, and has boosted many lesser-known and under-represented minority activists and artists. Numerous workshops, talks, exhibitions, experimental theatre performances, shows and concerts were regularly being housed and attended by thousands, including foreigners, diplomats, and NGO workers.

A. Baraka Sakin, Fathi-al-Daw, human rights, Khartoum, Sudan, Top
You may also like