In 2018, Global Witness documented 164 killings of land and environmental defenders 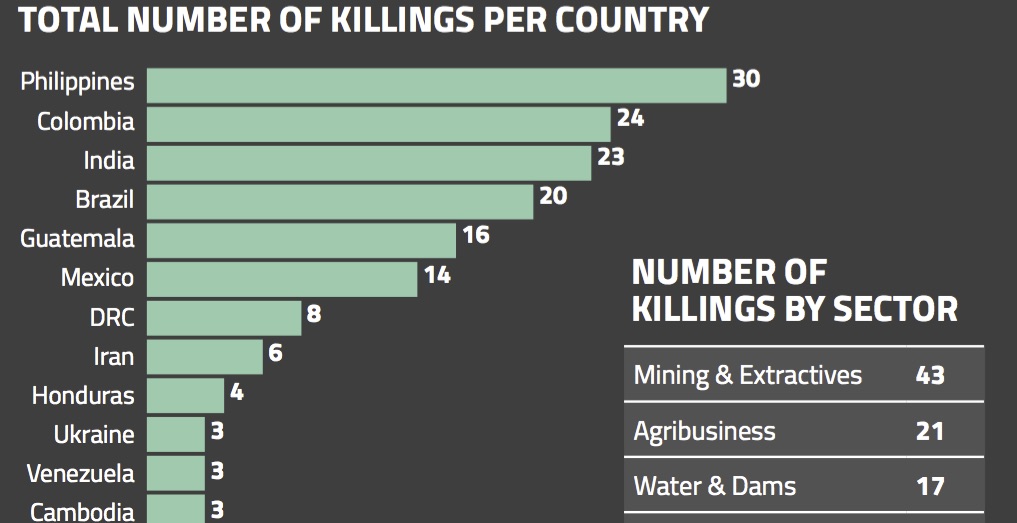 More than three people were murdered each week in 2018, with countless more criminalised, for defending their land and our environment.

Global Witness data on killings will never provide an accurate picture of the true scale of this problem, however. In some countries, the situation facing defenders is hard to gauge because the press isn’t free, and governments or NGOs don’t systematically monitor or document abuses. Land grabbing can also be very hard to monitor in parts of the world that are mired in conflict.

These factors, coupled with the fact that we maintain a strict approach to verifying reports of killings, mean that our figures are only approximate.

Some top findings by the Report:

164 land and environmental defenders were reported killed in 2018, which averages out to more than three a week. Many more were attacked or jailed.

For the first time since Global Witness started documenting killings in 2012, Brazil has slipped from first place in our ranking. This is in line with an overall drop in homicide rates there last year.

The Philippines suffered the largest number of deaths in 2018, with 30 killed. 15 of these killings were linked to agribusiness.

Guatemala saw a jump from three killings in 2017 to 16 killings last year, making it the most dangerous country per capita in 2018.

More than half of 2018 murders took place in Latin America, which has consistently ranked
as the worst-affected continent since Global Witness began publishing data on killings in 2012. One contributing factor is the region’s strong tradition of human rights activism. This means there are many groups working with land and environmental defenders and monitoring and reporting abuses.

Mining was the deadliest sector, with 43 defenders killed protesting against the destructive effects of mineral extraction on people’s land, livelihoods and the environment.

There was an escalation of killings of defenders struggling for the protection of water sources, rising from 4 in 2017 to 17 in 2018.

Widespread impunity makes it difficult to identify perpetrators, but Global Witness was able to link state security forces to 40 of the killings. Private actors like hitmen, criminal gangs and landowners were also the suspected aggressors in 40 deaths.