Home > Talking Kurdistan > The Rojava Revolution and the role of Women

The Rojava Revolution and the role of Women 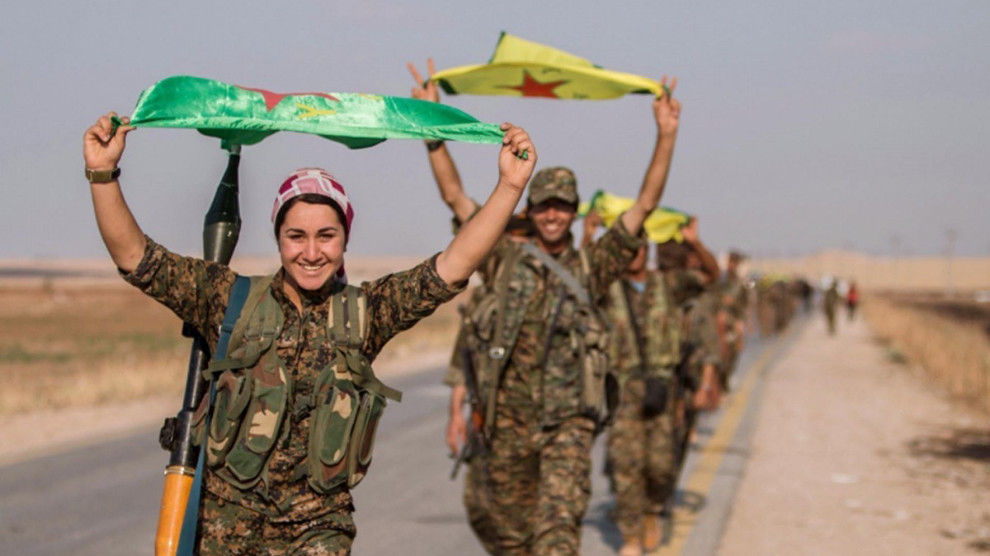 Today marks the 6th anniversary of the Rojava Revolution.

Women were in the lead and continue to play a crucial role in the new model of society implemented.

All the different ethnic and beliefs in Rojava and Northern Syria joined the 19 July Revolution with their own features and identities.

They started to work together to build a new democratic system on the road to democratization.

In the developed democratic system, democratic solutions to issues related to women as the oppressed gender were elaborated, and a political and social system started to take shape as an alternative to the global capital and capitalist system.

The so-called Arab Spring had begun in Tunisia in 2010 and had spread to other Arab and Northern African countries. It also reached Syria.

As the popular movement took its first steps in Syria, the Ba’ath regime responded with even stricter oppressive methods in place since 1963 to protect its power.

With the beginning of the Syrian Revolution on 15 March 2011, the peoples of Rojava and northern Syria called for freedom, democracy and equality, organising many demonstrations.

Peoples living in northern Syria also demanded an end of to the policy of denial imposed by the Ba’ath regime.

Rojava and Northern Syrian women with their various features began to take the lead in the struggle that developed. The essence of the work carried out in the struggle in Northern Syria and Rojava was a struggle for democracy of the peoples, but it was women who added their particular flavour to this.

Öcalan’s ideas formed the basis of the organization

In Rojava and Northern Syria women had the lead of the demonstrations and there is no doubt that the ideological and practical perspective of the struggle was taken from the philosophy of the PKK (Kurdistan Worker’s Party) leader Abdullah Öcalan. They were against the regional and international conspiracy.

In Rojava and Northern Syria, women set up their own organization in 2005 and called it Yekitiya Star.

Yekitiya Star, the first step in the struggle for women’s liberation, gradually reached a new level of organization in political, military, social, diplomatic and cultural fields with the beginning of the revolution.

Although in the region it was above all Kurdish women who were involved in the freedom struggle and organization, soon other women from the whole region were incorporated and joined both the struggle and the organisation.

In this way, the women’s organization that started as Yekitiya Star soon widened up to include various ethnic and religious structures and went on to cover various fields such as political, military and social.

Women strengthened their solidarity in the Syrian revolution

Following the slogan of strengthening the solidarity of women in the Syrian revolution, Yekitiya Star founded the Syrian Women’s Initiative that carried out many different works.

The preparatory meeting of the Syrian Women’s Initiative under the leadership of Yekitiya Star was organized in the Cizire region with the slogan “Whatever their nation, belief and society, the women of Cizire are one”.

The Syrian Women’s Initiative foundation conference was held in Qamishlo on 28 March and the first office was opened in the same Qamishlo on 17 November.

Training programs were organized for women in different parts of Rojava and Northern Syria. In the last period, trainings were held in the new liberated areas. In Afrin, Kobane and Cizire, Mala Jin (Women’s House) were opened.

The understanding was that women should be able to solve their problems, to implement social justice principles, to provide social development against reactionary minds, to participate in all spheres of society for an ecological, democratic and free society.

On 21 January 2014, the Democratic Autonomous Administration and the Women’s Council were established. This enhanced the opportunities and projects for women to be carried out in the fields of administration, diplomacy and economy.

Kobane city has witnessed many historic and heroical epics.

Women’s Defense Units (YPJ), in this city, have resisted the patriarchal system in the name of all women and received support from women all over the world.

After ISIS attacked Kobane on 15 September 2014, women got actively involved in defending the city against the mercenaries that threatened the world and imposed slavery on women.

Women fighters took their place in the front lines throughout the resistance, and carried out many actions.

Arin Mirkan became a symbol of the fight with the action she carried out on 5 October 2014.

Zehra Penaber, Hebun Derik and Evindar, are among the legendary commanders whose name will go down in history. They showed the all world that women can defend themselves and defeat the ISIS mercenaries.

Women have gained historical achievements against the invading Turkish army and its mercenary allies through the legendary resistance carried out in Afrin mountains.

Like Arin Mirkan, Avesta Xabur has become a legendary symbol in the struggle for liberty of all women of the world thanks to her resistance in Afrin.

Barin Kobane is another woman whose name has been written in the history of women’s resistance.

Barin Kobane like Arin and Avesta have opened the way to many more Barins, Arins, and Avestas who are ready to fight against ISIS and against fascism in the Resistance of the Age.